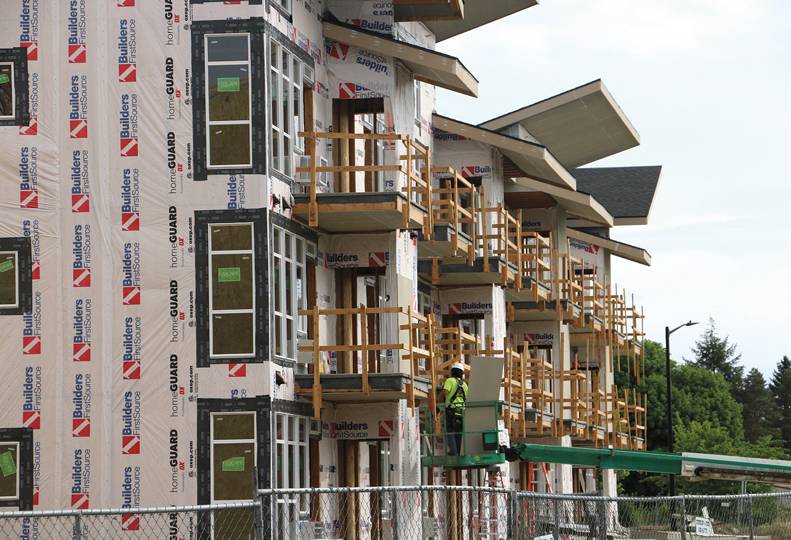 A prolonged lockdown in 2020 due to COVID-19 combined with moratoriums on evictions have helped pushed apartment vacancy rates to all-time lows, prompting a rise in rental rates due to higher demand, say a pair of experts who study local, regional, and national trends.

In a career that has spanned more than three decades studying housing markets, James Young, the executive director for the Washington Center for Real Estate, says he’s never seen what is taking place in the current apartment market in Spokane County.

“I’ve dealt with some of the hottest global housing markets in my career, and I’ve never seen anything like this,” says Young, who heads the real estate research center at the University of Washington.

In March, the vacancy rate for all apartments in Spokane County was 0.6%, according to the center’s spring 2021 Washington State Apartment Market Report, which was released May 21. The vacancy rate was 0.4% for a one-bedroom apartment and 0.7% for a two-bedroom unit.

“There was already high demand for apartment units in Spokane County before the pandemic,” Young says. “But COVID just pushed on the gas and made it accelerate.”

The center for real estate’s research shows Spokane County vacancy rates for all apartments has been declining gradually since the fall of 2018 when the vacancy rate stood at 5.8%. It fell to 2% in spring 2019, then to 1.8% in fall 2019. The vacancy rate saw an uptick to 2.1% in spring 2020 before falling to 1.1% last fall, according to center research.

The center for real estate research uses March and September data in an effort to minimize seasonal variation between markets, says Young.

Spokane County’s tight apartment market is feeling the effects of sheltering in place and eviction moratoriums, he says.

“Those two factors have created almost nonexistent turnover in the apartment market,” he says. “People are staying put.”

Those factors, in addition to in-migration, has sparked unprecedented demand, which has helped drive rental prices to unprecedented highs in Spokane, Young asserts.

The real estate research center found the average rent in March for a one-bedroom apartment in Spokane County was $933 per month, up 3.5% from the September average monthly rent of $901, and up 11% from March 2020’s average of $841.

Single-bedroom apartments constitute the majority of all apartment units in Spokane County and across Washington state.

During the pandemic, Washington state Gov. Jay Inslee issued—and later extended—a moratorium on residential evictions. That order is scheduled to expire at the end of June.

Young says even when the eviction moratorium is lifted, he doesn’t see rental rates declining or vacancy rates increasing in Spokane County.

“As long as the demand stays higher than the supply, you’re always going to be in a pickle,” Young says. “And that’s a longer-term problem that’s not going to change anytime soon.”

From another perspective, however, Spokane offers among the roomiest luxury rentals in the state for cities in similar markets, according to a recent report by the national apartment search website Rent Café.

Rent Café says luxury rental units in Spokane average 1,033 square feet of living space, with an average rent of $1,445 per month. That compares to 995-square-foot apartment at $1,646 per month in Federal Way, and a 988-square-foot luxury unit for $1,523 in Vancouver.

Rent Café reports that the average luxury apartment in Spokane Valley is 906-square feet and costs $1,238 per month.

Brian Carberry, the senior managing editor at Apartment Guide and Rent.com, based in Atlanta, characterized the nation’s current rental market as being uneven compared to prior years, mostly due to the pandemic.

“Though there are always market outliers, the U.S. apartment market generally follows a trend,” Carberry says. “But right now, things are more varied and random.”

“Generally, rental prices rise between April and September before flattening between September and March, which is largely a function of the kids being back in school,” he says. Last fall and winter, however, prices remained high, he adds.

“It’s a very interesting time right now,” Carberry says. “Year-to-year comparisons are a little misleading because the effect of the pandemic was so far reaching.”

Carberry says apartment industry analysts are watching states closely in the approaching weeks and months as eviction moratoriums gradually will begin to expire.

He predicts rental rates may level off, if not drop, as more apartment units may become available due to evictions.