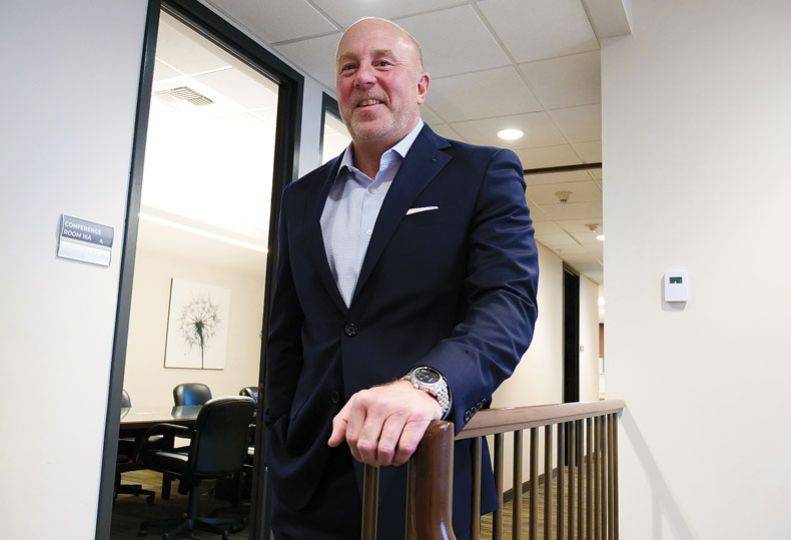 Lukins & Annis PS, one of the largest law firms in the Inland Northwest, has been working on the firm’s culture and diversity as its staff trends younger, says president and principal Mike Maurer.

“We have a program where we hire law students between their second and final year of law school to spend the summer with us, with an eye toward evaluating those students for employment as attorneys after they graduate from law school,” Maurer says. “It gives them a chance to see what the private practice of law looks like, what we look like as a law firm, and gives us a chance to get to know them a little and see whether they could be a good fit.”

Last year, Lukins & Annis, which has total staff of 60 in Spokane and satellite offices in Coeur d’Alene and Moses Lake, partnered with the Gonzaga University School of Law to provide the Lukins & Annis Law, Ethics, and Commerce Scholarship, which is meant to advance diversity, inclusion, and minority representation in the legal community here. The scholarship includes financial assistance and a summer associate position.

However, creating a pipeline from law school to full-time employment isn’t a new concept at the firm.

Maurer, who has been president of Lukins & Annis for 10 years, first came to work for the firm through the summer program in 1989. He was hired as a full-time attorney after he graduated from the University of Montana School of Law.

Even so, Maurer says the recent effort “has been the most consistent source of bringing new lawyers into the law firm for a long time.”

Lukins & Annis currently has 34 actively practicing attorneys, a number that has held steady in recent years. On the Journal’s March 2022 list of the largest law firms here, Lukins & Annis ranked third of 23 firms by number of attorneys practicing in the Spokane-Coeur d’Alene area.

Maurer says that paying attention to the diversity and inclusion within the firm has become more important for recruiting and retaining attorneys and support staff.

“Particularly over the past several years, we realized we needed to be more forward-thinking and explore new ways to become more diverse, with an emphasis on recruiting and retaining staff who come from communities that have not traditionally had easy access into the legal community,” Maurer says. “We realized that maybe we were doing some things well, but we needed a gut-check about that, so we retained a consultant.”

The consultant’s report was mixed, he says.

“Taking a long, hard look at oneself is sometimes not the easiest thing to do,” Maurer says. “But it’s important to the firm. It’s important particularly to our young people.”

Finding a balance between the firm’s competitive, industrious culture and creating an environment that’s welcoming to employees who have growing families has been a challenge, Maurer says.

“One of the really difficult concepts in retaining and fostering a long-term partnership track for female lawyers is ... women still bear a much bigger burden in childrearing,” Maurer says.

Many working parents feel torn in the balancing act between nurturing their careers and their children, he says.

“The inherent fear that these young people have if they leave the office for three or four months after having a baby is that they’d be left behind, or that it would impact their relationships with more senior lawyers, or harm their starting client base,” Maurer says. “That’s something we’ve tried to address.”

The firm has maintained a concentration on business law, such as commercial real estate transactions, intellectual property, and employment.

“I have enjoyed representing individuals or small businesses in cases involving what I have viewed as injustice by governmental entities and/or insurance companies,” Maurer says. “Often there is a significant fight and dispute as to what is the fair market value of the property, based on its highest and best use. Individuals and small businesses can be at a disadvantage in our legal system when you’re litigating against … a governmental entity or a large insurance company that has unlimited resources to throw into litigation.”

He typically takes on such cases on a contingency basis in which his fees are paid via a percentage of any settlement or jury award.

Maurer declines to disclose the firm’s annual revenue but says profitability on a per-partner and per-attorney basis has increased year-over-year. Part of the firm’s profitability is due to hiring younger, less experienced attorneys who start at a lower salary, and part is due to longstanding, loyal clientele, he says.

Maurer says the greatest change he’s witnessed in the field of law has been the implementation of computers and digital communication. However, those haven’t come without some consequences, he says.

“Throughout my career, it’s certainly become more impersonal in the sense that when I started, there wasn’t email, and a lot of communication occurred over the phone or in person,” Maurer says. “That has changed greatly, and in some ways, to the detriment of the profession. It’s much easier to engage in uncivil behavior when it’s behind a keyboard, rather than in person.”

However, he notes, “The vast majority of lawyers practicing in this community take their obligations toward civility and professionalism (seriously).”

The shift to digital has accelerated since the COVID-19 pandemic, Maurer says. For example, many court hearings and depositions now are held via video conferencing.

Maurer says he believes that in certain areas, such as cross examination of witnesses during depositions, in-person meetings are vital.

Technological advancements have led to more efficiency within the firm’s communications and daily operations, Maurer says.

“Lawyers used to spend a significant part of their day on the phone, trying to connect with opposing counsel or lawyers involved on the other side of a transactional matter,” he says.

When the COVID-19 pandemic struck and the staff was forced to turn to digital communication while working remotely, he was anxious to return to the office, he says. Through a mid-2021 survey, he discovered that most employees also favored working in the firm’s offices.

“We do our best when most of us are in the office,” Maurer contends.

The firm is headquartered on the 16th floor and a portion of the 15th floor of the Washington Trust Financial Center, at 717 W. Sprague. Its Coeur d’Alene office is at 601 E. Front. The Moses Lake office is located at 821 E. Sharon.

Lukins & Annis was established in July 1972 with the merger of two firms.

Lukins & Annis also expanded geographically through mergers into Coeur d’Alene in 1985 and into Moses Lake in 1992. For several years in the early 2000s, the firm also had an office in Seattle, but has since closed that location.

Maurer says the firm hasn’t been part of a large merger in about 20 years.