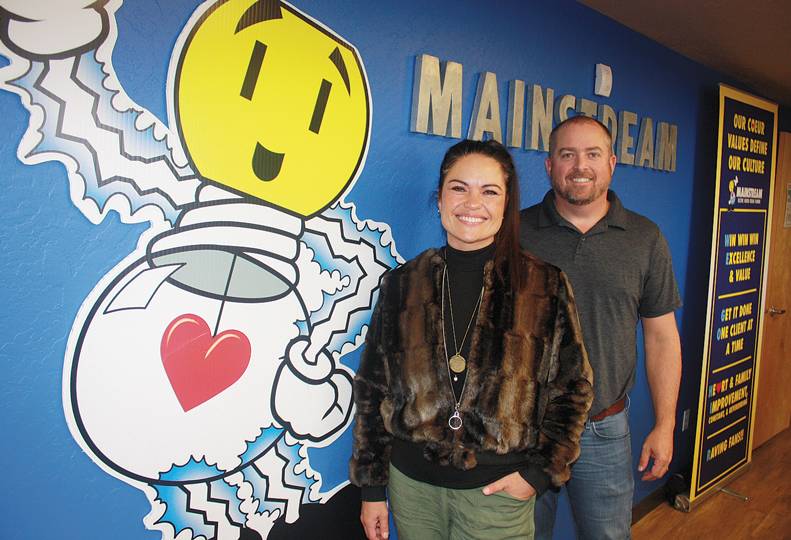 -CRAIG HOWARD
Elaine and Todd Damschen, owners of Mainstream Electric Inc., have formed a nonprofi t as a formal way to help people who are struggling to make necessary home improvements.

Some businesses might struggle with an encore after earning mention in publications like the international daily business newspaper Financial Times and American business periodical Inc. magazine’s Inc. 5000 list as one of the fastest growing companies in the U.S.

“It’s that old saying, ‘Where much is given, much is required,’” says Elaine Damschen, Mainstream president, who co-owns the company with her husband and Mainstream CEO, Todd Damschen. “I feel like the community has blessed us with a thriving business, and we want to bless the community back.”

Now Mainstream is taking it a step further, establishing its own nonprofit called Miracles from Mainstream that will raise dedicated funds and partner with other local nonprofits to identify worthy candidates for philanthropic projects.

Mainstream, in its 21st year of operation, is known for its bold yellow and blue vans featuring Zapp, the cheerful company mascot who sports a lightbulb for a torso. A year ago, the business had around 30 employees. By the end of this month, the staff count will be closer to 60.

Mainstream’s move at the beginning of the year to its 12,000 square-foot facility 12822 E. Indiana, in Spokane Valley, from its longtime home base in Post Falls added some 9,000 square feet of space for the company’s operations.

Damschen says that if the final quarter of 2020 goes as anticipated, Mainstream’s annual revenue will be nearly double last year’s revenue of $6.2 million.

Mainstream plans to raise funds for Miracles from Mainstream by setting aside a portion of its revenue, encouraging customers to contribute, and conducting outside fundraising activities, she says. The company might even dedicate a few vans to the program down the road, she adds.

Some of Mainstream’s vendors, like Lennox, Daikin, and Johnstone Supply, have pitched in complimentary and discounted equipment for the charitable cause.

Last March, the family-owned operation collaborated with Spokane Neighborhood Action Partners to provide a hot water heater for a single mom who was doing her best to address a leaking model with a steady rotation of buckets.

A few months later, Mainstream worked with SNAP again to help a senior on a fixed income whose furnace had broken down just as freezing temperatures encroached. To stave off the cold, the woman had taken to layering handwarmers in her clothes.

“I will always remember the woman who was sleeping with handwarmers to stay warm until Mainstream replaced her furnace,” says SNAP CEO Julie Honekamp. “We depend on our partners to fill in gaps in service, and Mainstream Electric is one of those partners we can always count on.”

In both cases, the appliances and installation came at no cost to the recipients.

Damschen says growing up in Post Falls and later becoming a teacher with the Emmett, Idaho, Independent School District in a rural area 30 miles north of Boise, gave her an appreciation for those facing economic challenges. She recalls a parent volunteer in her classroom, who was dealing with a variety of personal concerns and financial uncertainty, showing what it meant to have “a giving heart.”

“She was a perfect example of someone who may have not had much materially but still gave so much,” Damschen says. “I remember her bringing me banana bread and saying what a blessing I was to her while she was helping me so much. She definitely influenced me in establishing that life philosophy.”

She taught for eight years and helped establish a free breakfast program at her school.

“I saw those kids who were invisible to some,” she says.

The same entrepreneurial spirit that recently launched Mainstream’s nonprofit venture had spurred the founding of the company over two decades ago. At the time, Todd Damschen was working as a journeyman electrician but had always envisioned owning his own business.

“I just went to Barnes & Noble and started reading books,” he recalls. “I was a good electrician, but I didn’t really know how to run a business. It started with learning basic things like how to write a contract.”

Elaine Damschen joined the company in 2002 and handles the marketing responsibilities. The couple’s three grown children are also Mainstream employees.

Well before filling out its 501(c)(3) paperwork to register Miracles from Mainstream as a nonprofit, Mainstream was active in providing community support. A monthly program awarded $500 to nonprofits that came in via nomination. The company also has been a longtime sponsor of SNAP’s 5K fundraiser, the Dad’s Day Dash.

Honekamp says, “We are incredibly grateful for our partnership with Mainstream. They are really authentic people who care about keeping our neighbors warm and secure.”

Todd Damschen says, “It’s just nice to be able to give back. You don’t even need a lot of money. If you have time and talents, you can make a difference. With the work we do, we’re able to help people establish happier, healthier lives.”

The latest effort by Miracles from Mainstream involves a collaboration with Family Promise of Spokane, a nonprofit focused on ending the cycle of family homelessness. Mainstream is installing plumbing and heating ventilation, and air-conditioning systems in a home next to the Family Promise Open Doors Shelter that will expand emergency housing.

Joe Ader, Family Promise of Spokane executive director, says, “We are so thrilled to have Mainstream use their skills and resources to provide a livable environment to homeless families through Family Promise. I would love to see more businesses look at their skill sets and use them to help as well.”

Mainstream plans to offer its new program to residents in the greater Spokane area and North Idaho. Elaine Damschen says a cookbook featuring favorite recipes of employees will be published for the holidays with sales generating revenue for future projects.

“It’s not what we do, but how we make people feel, that’s memorable,” she says. “For me, it’s these moments that make running a business worthwhile.”