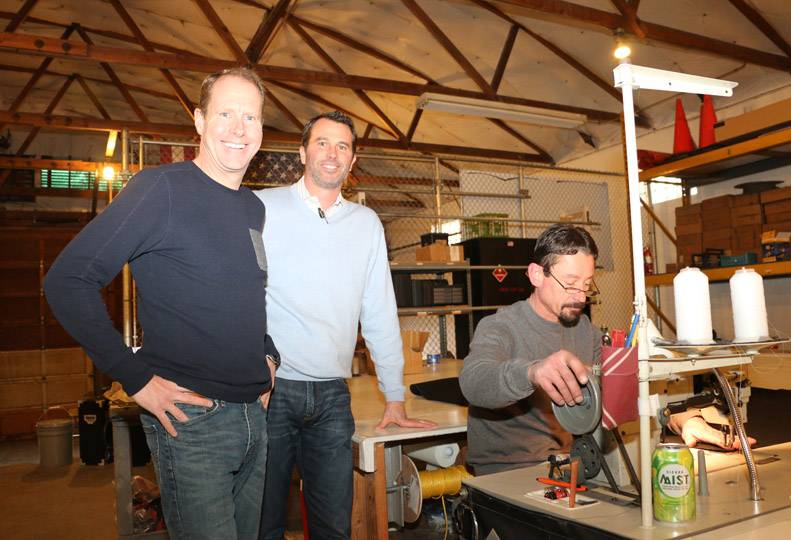 - –Katie Ross
Tom Simpson and Andy Barrett, standing, says all of the companies occupying space at Toolbox, which was located purposely in the University District, will be manufacturing tangible products.

Toolbox is located in a portion of the former Habitat for Humanity ReStore building at 840 E. Spokane Falls Blvd., near the McKinstry Innovation Center. It’s intended to serve as a collaborative space where established companies and business mentors will share expertise, ideas, tools, and equipment with manufacturing startups and entrepreneurs, Simpson says.

Barrett says improvements to the 7,500-square-foot Toolbox space are ongoing, although several businesses and ideas currently are being incubated there. Toolbox is occupying the farthest west bay of the building and is walled off from the other two bays there, which are called the McKinstry Shops and serve as manufacturing space for that company.

Once completed, the incubator space will feature glass overhead doors and a 20-foot shipping container-turned-meeting room inside, Barrett says.

“This will definitely be a place of collaboration,” he says. “It’s an open area, and we’re bringing in a variety of people—students, moonlighters—who are entrepreneurs but still have that 9-to-5 (job).”

Barrett is the chairman and majority shareholder of Spokane Valley-based Berg Co. and Simpson is chairman and co-founder of Spokane-based ecommerce company etailz Inc. and president of the Spokane Angel Alliance investment fund.

Kim Pearman-Gilman, Spokane-based director of strategic development for McKinstry, says Toolbox has committed to staying in the space for five years. The renovations to the Toolbox space should be completed in May, she says.

“We’re flying the plane, but we’re building it while we’re flying it,” she says.

Toolbox pays McKinstry rent for its space, Pearman-Gillman says, and McKinstry has no ownership or financial stake in any of the companies within Toolbox.

“(Toolbox) is a missing link in Spokane,” she says. “They kind of have no rules—but in a good way. The tools they have, you can’t afford those when you’re just starting up. They’re making sure entrepreneurs have those.”

“As a community … there are lots of manufacturing skills here,” she says. “Now we can take that brain power and do a lot of manufacturing. They’re really looking to take that entrepreneur that’s got the right ‘oomph’ and give them structure.”

Simpson says all the companies in Toolbox will be making or manufacturing a tangible product, which he contends distinguishes it from other business incubators. Simpson says he and Barrett wanted to locate Toolbox on the McKinstry campus because McKinstry itself is known for housing startups, and it’s in the University District.

“It really is the hub of entrepreneurial activity in Spokane,” he says.

Barrett and Simpson have been incubating and mentoring companies under Toolbox for a few years, they say, but this is the first time the concept has its own dedicated location.

Sport Scope Inc., the Spokane Valley-based manufacturer of end-zone cameras that Barrett and Simpson started with partner Derek Taylor, was one of the first Toolbox companies, Barrett says.

“Now it’s been three years, and it’s been profitable,” he says. “It’s got its best year ever coming up, and now they have their own lease.”

Of Sport Scope, Simpson says, “It’s the poster child of bootstrapping a company. (Taylor) is just the kind of person we want.”

Simpson also helped launch etailz, which is headquartered in the McKinstry Innovation Center and started out as Green Cupboards Inc. in 2008, with Josh Neblett and Sarah Wollnick.

“There’ll be room for more as we grow,” he says.

One company operating in the Toolbox space is Vestis Systems, a shading and awnings manufacturer that Barrett helped create. Some space within Toolbox also is dedicated to a nonprofit called Spokane Create, which will be open to the public.

“That will be a place where the public can come in and create and tinker,” Barrett says. “They’ll have their own equipment and also will put on classes. A lot of that will be after-hours stuff.”

“The nice thing for the companies that are in there now is there’s lots of equipment for rapid prototyping, like sewing machines, welders, a 3-D printer, and so on,” Barrett says.

Simpson and Barrett also are mentoring two other companies in Toolbox that are in the early stages of being incorporated. One is Omega Greenhouse, a year-round urban greenhouse design project. The other is a year-round holiday lights company, which doesn’t have a name yet, Simpson says. That company is being founded in collaboration with a group of students from Whitworth University, he says.

Simpson says the idea for the holiday lights came about because Barrett used to be his neighbor, and was a bit slow taking down his Christmas lights every year.

“So now we have this little control panel, and you can push “Christmas lights” and the lights will be green, red, and white,” he says. “Then you could push “Valentine’s Day” and they’ll be pink and red … for Seahawks fans, they could be blue and green. They’ll always be holiday appropriate.”

Barrett says the holiday lights company, which has a prototype and will be looking for funding soon, was a collaborative effort.

“In order to do this, it takes the community,” he says. “It took Tom, the college students, a local company with lighting experience—all of them together—to produce it.”

Barrett says the group producing the urban greenhouse project is in the process of writing a business plan and meeting with local businesses.

Barrett says his and Simpson’s goal for this year is to launch two companies out of the Toolbox space.

Simpson explains that by “launch,” the two mean that the startup has a working prototype that looks good, a leader, a business plan, and some sort of funding. Simpson and Barrett will help the companies secure funding through their networks of investors, he says.

Barrett says none of the businesses that will be incubated in Toolbox will pay rent at first. Once a company does officially launch, though, they will pay rent to be in the Toolbox space, he says.

Barrett says the two wouldn’t rule out an entrepreneur coming to them with a good idea for a business, but for now, the two have plenty of ideas.

Fortunately, Barrett says, Toolbox is in an area with lots of young minds.

The two also are planning to host a variety of events at Toolbox, from networking to educational gatherings.