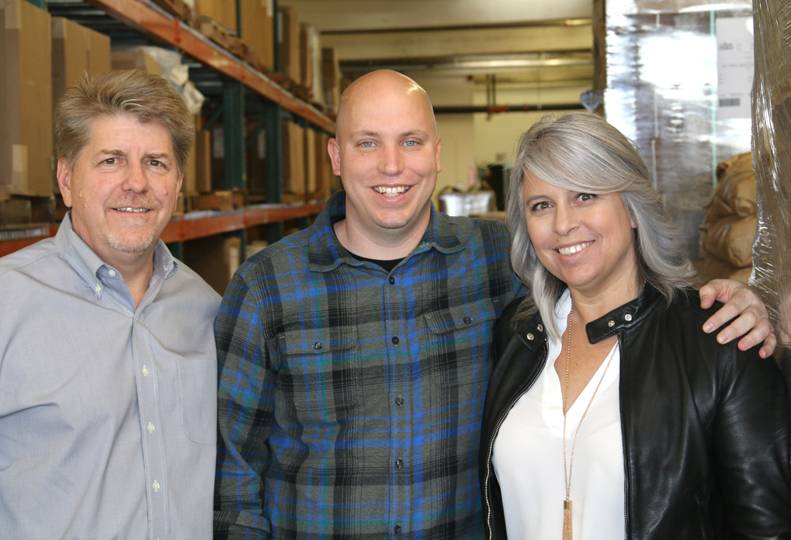 It’s an early Saturday, and the warehouse of the Spokane-based spices and rub company Spiceology Inc. is abuzz with employees filling and packaging spices in preparation for year-end orders.

“From now until the end of the year, it’s all about revving up for the holidays,” says Spiceology CEO Chip Overstreet. “For six to seven days a week, starting a 7 a.m., this place is humming,” he says of the company’s “spice lab” at 715 E. Sprague.

The word is out, and revenue is up for Spiceology.

Founded in 2012 by chief marketing officer Pete Taylor and director of marketplaces Heather Scholten, the company recently was listed by weekly business magazine Inc. among the fastest growing private companies in the U.S.

Spiceology had 100% revenue growth in 2018 with $3.2 million in sales, up from $1.6 million the year before, Overstreet says the company expects to generate $6 million in revenue this year. Roughly 65% of the company’s annual earnings occur in the fourth quarter of the year.

Spiceology sells 60% of its products to consumers and 40% to chefs and restaurants in the food services industry, Overstreet says.

The current location, which the company moved into at the beginning of the year, marks its fifth in the last six years. The company has outgrown all its prior locations. Currently the company has 29,000 square feet of space, most of which is dedicated to the spice lab, he says.

Spiceology currently has 40 employees and expects it will continue to grow.

“While there isn’t a specific number, I don’t expect that we’ll double over the next year,” Overstreet says. “We will largely see growth in our sales and marketing departments.”

Recently, the company has made key hires in leadership roles intended to lift the company to greater heights.

Taylor and Scholten hired Overstreet, a Spokane native, in May.

Most of his career was spent in the technology sector in Silicon Valley. He moved back to Spokane eight years ago but commuted to San Francisco every other week where he ran business development for Affirm, a financial technology company started by PayPal Holdings Inc. founder Max Levchin.

“He was serving it out of a barrel, and I was hooked,” says Overstreet, who’s been a mentor to Taylor and Scholten ever since.

More recently, in August, the company hired Chad Hall to head business development. He accepted the position after serving as director of sales and service at Restaurants on the Run, which was acquired by GrubHub in 2015.

Overstreet says Taylor and Scholten made the decision earlier this year to grow the business in unprecedented fashion.

“Pete and Heather basically said, ‘Now is the time to capitalize on the opportunity in front of us,’’’ he says.

As for Taylor, the idea of starting his own company occurred to him over a period of time. He spent 15 years as a chef with his last position being at the Cavanaugh’s at Priest Lake resort.

“I always had a knack for creating tasty blends,” Taylor says. But there was one that stood out among all others.

“I’d always hear, ‘What’s up with your smoky habañero chicken?’’’ Taylor says of the feedback he frequently received from patrons.

He began bottling his special sauce, laced with his own spice blends, and started venturing out with it to events such as Spokane Startup Weekend and other Kick Starter business events. Taylor finally went all in on his idea to build a company specializing in unique rubs and premium spices.

Not long after that he reached out to Scholten and asked her to join him in his venture.

“I needed a partner who could help me promote and who knew the food industry,” Taylor says.

He went online and began searching for area food bloggers and discovered Scholten, who had a long list of followers and was frequently solicited for food content for high-profile publications across the country.

Scholten says she started the blog in 2006, and it evolved over time.

“Where to eat, recipe development,” she says. “Those sure were some nice checks coming in the mail.”

Taylor admitted it took some time to pry her away from her lucrative freelance work.

“I could see that Pete was on to something,” Scholten says. “And it was getting to the point that I couldn’t blog and do the spice company. I didn’t want to wait too long and miss out on his spice train.”

For the next two years, they worked to get SavorX – as the company originally was named – off the ground.

“We were at farmer’s markets, gun shows … you name it. If we could set up a table, we were there,” Taylor says.

They’d begin mixing and packaging spices as early as 4 a.m. and hit the road to whatever event they had arranged to attend.

In 2014, the company landed a food broker – an independently contracted sales representative – to shop what was quickly becoming a flourishing collection of their own spices.

That year, Seattle-based Sur La Table, a privately held retail company that sells kitchenware and cookware, placed a $15,000 order with SavorX. Scholten and Taylor say that was their defining moment.

Then, at the beginning of 2015, they attended the San Francisco Winter Fancy Food Show, which drew 19,000 attendees, 1,400 exhibitors, and more than 400 vendors. Not long after began their current relationship with vendor Williams & Sonoma.

The timing couldn’t have been better because entry into the ÑSan Francisco food show was $12,000.

“We didn’t pay ourselves anything for 12 to 18 months,” Taylor says.

In the meantime, Taylor and Scholten were still grappling with the company’s name.

“People kept asking what it means; how is it pronounced,” Scholten says. “Finally, I was looking at an email from Pete, which he signed ‘Spiceologist’ as his title. We thought, that’s it!”

Spiceology is also a favorite among chefs for its creative packaging.

Says Taylor, “It makes it considerably easier for a chef to locate spices in the kitchen.”

Moving forward, Taylor and Scholten say they’ll rely heavily on their recent and future hires to grow the company.

“The truth is, if we had listened to Chip earlier on, we would be further along than we are now,” Taylor says. “He kept saying, ‘To start, do one thing really well.’ We were trying to do too much,” he says of himself and Scholten.

“What we’ve learned is that people you hire are an absolute priority,” he says.