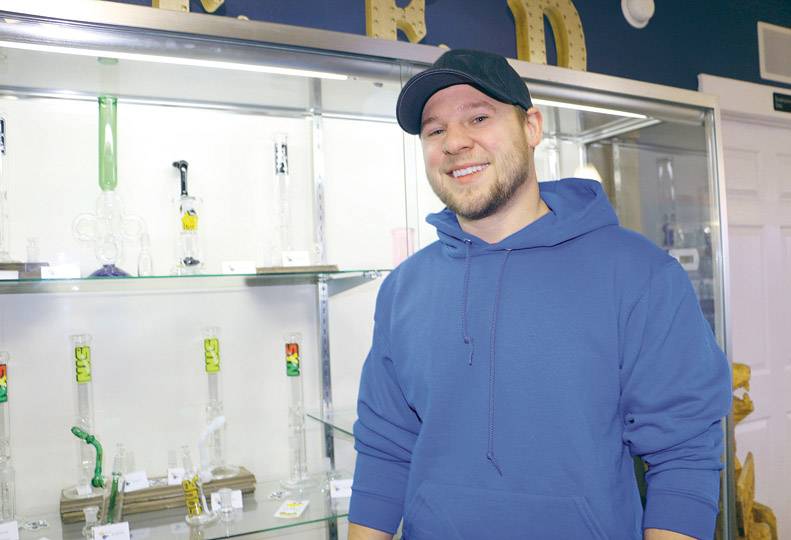 - –Katie Ross
Steve Burks, manager of marijuana retailer Treehouse Club, says that it’s still a risk for pot businesses to try to use banks. He estimates his shop serves 80 to 150 customers a day.

While Washington’s recreational marijuana industry continues to have healthy sales, growers and retailers are facing a continued challenge with banking and now a new problem with oversupply.

Steve Burks, manager of Spokane Valley retail shop Treehouse Club LLC, says that while in the beginning retailers faced an undersupply problem, now there’s more marijuana on the market than retailers are selling.

“It’s absolutely true,” Burks says. “I saw an article the other day that (claimed) stores have only sold one-fifth of the marijuana that’s been grown legally.”

“Getting in contact with suppliers was easier, so it was kind of nice in that aspect,” he says. “On the other side, we’re showing up late and people already found stores that had opened and they were comfortable with.”

“We try to keep a variety of everything,” he says.

Burks says he estimates the shop sees between 80 and 150 customers a day. For January, its first full month, the shop had $52,000 in sales, he says.

“I think we’re on pace to break that this month,” Burks says.

Burks says he thinks the drop in prices is helping drive customers to the retail market. However, it makes it tough on the businesses, which pay an excise tax of 25 percent to the government for every sale.

“We’re all just treading water right now, especially the growers,” he says. “They have to keep lowering prices to stay afloat.”

“Unfortunately, I don’t think the liquor control board had a real handle on how much pot Washingtonians can grow outside, so they licensed a lot of large-scale outdoor growers,” he says.

Farmer J’s is a tier-three growing operation, the largest allowed by the state, which means it’s allowed to have 21,000 square feet of plants, Herling says. Right now, the operation produces around 100 pounds of marijuana a month, and its products are sold in 45 retail stores around the state, he says.

“Twenty-one thousand feet of canopy is a lot, so there were outdoor growers that had been growing since they were licensed,” he says. “If you get plants in the ground in June, and you have a lot of them, you’re going to have a huge yield, especially with the Indian summer we had.”

After the initial high demand and prices, the market seemed to stabilize by last September, Herling says. However, once more crops began to roll in, prices were driven down.

“You’ve got thousands of pounds of product sitting there, and retail shops are saying I can get this cheaper and cheaper, with no regard to quality or future ramifications,” he says. “It was, let’s get this cheaper product on our shelves either to offer a lower price point or increase margins. That just became a free fall.”

Herling says that, while there are some retailers still offering fair prices to producers, the wholesale prices retailers were paying when the first crop of outdoor marijuana first hit the market were double or triple what they are now.

“We’re on the tail-end of this stuff even being viable right now,” he says. “If I were a retailer, I wouldn’t want to be purchasing product grown outside last fall now.”

“Outdoor is more susceptible to climate, so if it’s humid, you have a higher chance of bud mold, bud rot, mildew; there are insects, spiders, birds, all that stuff,” he says. “With indoor, you’re completely in control.”

Growing marijuana indoors also costs more for the grower, Herling says, because of the electricity needed for the lights and other equipment.

“I would say 5, maybe 10 percent of outdoor that’s produced should actually be packaged and sold at retailers as vendible, sellable marijuana,” he says. “ … Historically, outdoor (marijuana) goes for about 60 percent of what indoor goes for. That’s not saying some outdoor isn’t phenomenal; it is.”

Herling says a traditional outdoor growing operation will start planting in the late spring and, depending on the strain, start harvesting in October. However, the indoor growing cycle is completely dependent on the grower’s infrastructure, he says.

Herling says that part of the problem for retail stores was that some cities and counties were placing moratoriums on the industry.

“I think our company has helped alleviate that,” Herling contends. “We had the Association of Washington Cities tour our facility (last summer), and the response was extremely positive.”

“Unfortunately, because there are very few outlets where we can sell this product, whether we’re outside or inside (growers), now it’s just a race to the bottom,” he says. “I did not see the race to the bottom being as quick or as violent as it was.”

Sterling Felton, an employee at North Side marijuana retailer Satori, which operates under the company Instant Karma LLC, says that shop has trouble keeping some of its more popular strains on the shelf.

“People just buy them up,” he says. “There was a huge lack of product at the start … now we’re seeing these farmers dialing in their grows.”

Felton does say, however, that the state could use more shops to keep pace with the growers.

“It seemed almost like the (state) is giving out too many farmer licenses, or not enough retail licenses,” he says.

Satori, which is located at 9301 N. Division and has nine employees, carries bud marijuana, edibles, concentrates, and tonics, Felton says, as well as pre-loaded vaporizer cartridges.

Burks says he thinks there needs to be some adjustment in the tax rates at the legislative level in order to keep the industry alive.

“I hear there are some talks about it,” he says.

Another statewide issue is whether marijuana businesses can use banks or not. Burks says Treehouse Club doesn’t have a bank currently.

“Banks aren’t allowed to take us right now, and I’m trying to fly above the legal line as high as I can, so going in there and trying to say it’s a personal account or something, I’m not willing to risk it,” he says.

Treehouse Club does get a lot of people trying to use credit or debit cards, which the shop can’t take, Burks says. However, the shop has an automated teller machine inside, so most customers can withdraw cash for their purchases.

Felton says that Satori currently also is a cash-only shop.

Burks says the shop also must give each customer a warning card that details the possible harmful effects of marijuana use.

The other marijuana elephant in the room for the Legislature is what to do about the less-regulated medical marijuana industry. On Feb. 13, the Washington State Senate passed Senate Bill 5052, which seeks to reconcile the medical and recreational industries.

The bill also would essentially eliminate the current medical marijuana collective structure, instead only allowing four patients per cooperative. The cooperatives would be limited to a total of 60 plants and couldn’t be within 15 miles of a recreational shop. Under the current structure, a patient with a “green card” from a designated medical provider can grow up to 15 plants; patients also can band together to form collective gardens.

However, the bill would allow existing cooperatives to remain open by having the Washington State Liquor Control Board take into consideration whether someone operated a collective garden when reviewing their recreational marijuana application. The measure also would raise the number of recreational stores allowed in the state, which is currently 334, to accommodate medical patients.

If the Legislature decides to do away with collectives, Burks says Treehouse Club will embrace medical customers.

“It sounds like that’s the route they’re going, and if that’s what the state wants to do, we’ll dive right in,” he says.

“They come in all the time, but we have to tell them that we’re recreation, we’re not trained as medical professionals,” he says. “Plus the state won’t let us talk about pain (management) or anything, so it’s kind of a taboo topic right now.”