Incoming second-year class to be half the expected size 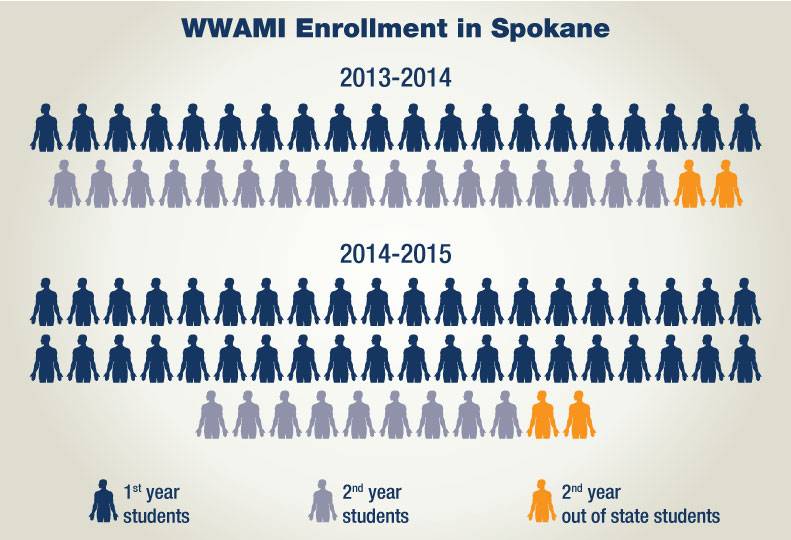 The incoming class of second-year medical students in Spokane will be about half the size of the inaugural second-year class, with nine to 11 slots failing to fill.

Second-year medical education in Spokane currently is offered through a two-year pilot program funded partially by private donations. Those donations were generated through a fundraising campaign initiated by Greater Spokane Incorporated and others and led by Spokane executives Marty Dickinson, of Umpqua Bank, and Tom Quigley, of  Kiemle & Hagood Co. commercial real estate brokerage. Proponents of medical education here also secured for the school a $2 million grant from the Health Sciences & Services Authority of Spokane County and $850,000 from the Empire Health Foundation. In all, advocates raised more than $4 million to fund the second-year program and recruit faculty.

With the pilot, medical students can receive all four years of training in Spokane. Some first-, third-, and fourth-year students have learned here since WWAMI—short for Washington, Wyoming, Alaska, Montana, and Idaho—was established in 1971.

During the first year of the pilot program, 19 second-year students attended classes in Spokane, including 17 from Washington, Roberts says. When the class didn’t fill with in-state students, UW opened up to WWAMI students from other states. Two from Montana opted to take classes here, leaving just one slot vacant.

When they opened up the Spokane option to students from other states, they received interest from the two in Wyoming and three in Idaho. While the two Wyoming students are still in play, Roberts says, the Idaho State Board of Education ruled its students must attend second-year classes at UW.

“I don’t have an explanation as to what goes into that decision,” Roberts says. “The state may want to make sure their students have exposure to the main campus in Seattle, but I didn’t get an explanation. That’s just the way it was.”

Typically, medical students receive their first year of training in their home state, then all students go to Seattle for their second year.

“Choosing to do a second year here is definitely a deviation from the norm,” Roberts says.

While fewer second-year students will attend classes here, the first-year class taught in Spokane will double in size this fall, to 40 from 20. In previous years, Spokane and Pullman hosted 20 first-year students each. Starting this fall, all 40 of those students will train at the Biomedical & Health Sciences Building on the Riverpoint Campus east of downtown Spokane.

While students currently volunteer to come here for the second-year program, they are assigned to a first-year location. They submit a preference, but ultimately, UW decides where they go. Roberts says that typically, about half of a first-year class requests to attend in Spokane, and the other half is assigned here.

Starting with the fall 2015 first-year class, that dynamic is due to change. Those 40 students assigned to Spokane are due to remain for second-year training, Roberts says, so in the fall of 2016, a total of 80 first- and second-year students will learn here.

With the pilot program ending and UW’s plan to fund second-year education here starting in 2016, there currently isn’t a funding mechanism in place for a second-year program for the 2015-16 school year. Because this year’s class is half the expected size, however, the pilot program might not need all of the money that’s been committed to it, which raises the question as to whether those saved funds could be used to extend the pilot.

During the first year of the pilot program, Roberts says, students took classes in two halves—two groups of 10. With this year’s class at half the size, it likely will be taught as one group, which would take less instruction, Roberts says.

“I’m not sure if we’ll extend the pilot program (into 2015),” he says. “We potentially could do that, but that’s a discussion that would have to happen.”