Medex Northwest: An assist to the provider gap 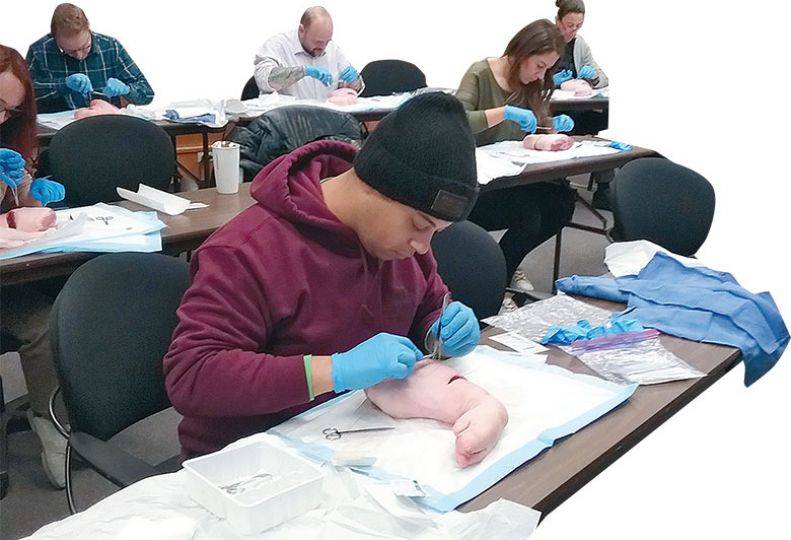 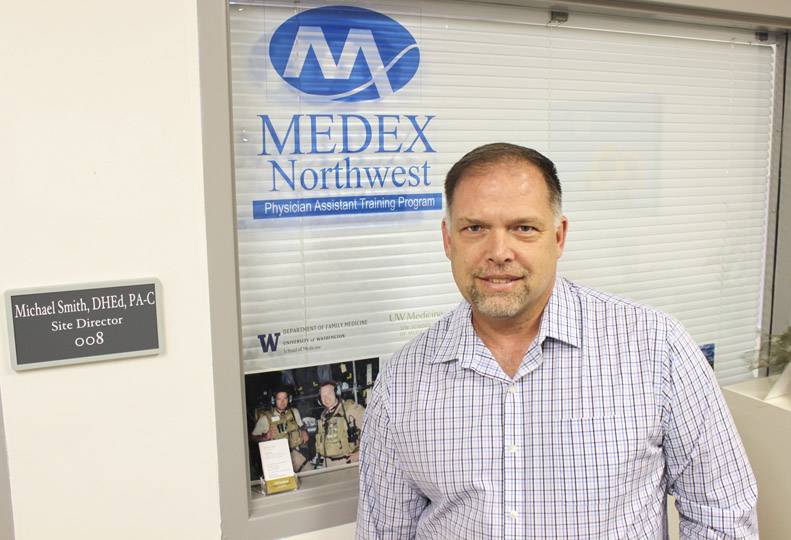 -—Treva Lind
Michael Smith, physician assistant director for the Spokane training program, says the average salary for a PA is $114,000 a year.

Trained as an emergency room technician, Eric Anderies, 28, worked at a Spokane hospital for about three years before deciding to enter a regional physician assistant program.

He’s among 31 students now studying in a Spokane classroom through Medex Northwest, a University of Washington School of Medicine training program for people with medical experience to become physician assistants. Medex classes are held in Spokane, Seattle, Tacoma, and Anchorage, for up to 140 students overall each year.

Spokane students complete first-year coursework on the Gonzaga University campus, spending seven hours a day in a classroom at the Schoenberg Center, before beginning second-year clinical work the following fall. To gain physician assistants’ clinical skills, they will train at health care sites in Spokane and regionally, as far as Hawaii, Nevada, and Alaska.

Anderies’ wife, Jessica Anderies, 27, is a former hospital nurse who also entered this year’s Medex class in Spokane to become a physician assistant.

“We both had experience in the hospital,” says Eric Anderies. “You get more interested in the medical knowledge and science to keep finding out more, so you can help people more.”

Students complete the program in 27 months. After graduation, Anderies and his wife plan to continue working in Spokane health care.

“I’ll probably be more into emergency work,” he says. “My wife is deciding, but she likes more of the surgical field.”

Both are entering a career that’s expected to grow by more than 30 percent in the next decade. In Washington state, more than 2,760 physician assistants are employed, and that number is projected to be at about 3,600 positions by 2027, Medex data indicate. Much of that demand is attributed to rising medical needs of a large demographic group—baby boomers.

“Baby boomers are living longer and in higher numbers, and we’re not cranking out enough doctors,” Smith says. “There’s a shortage of providers.”

Next year’s Spokane class includes 33 students, he says, close to the site’s capacity.

“We bring a lot to the table for the price,” he says.

The average salary for physician assistants in Washington state is about $114,000 a year, compared with about $219,000 annually as an average family practitioner salary, says Smith.

“Studies show that PAs can manage about 80 percent to 90 percent of the care provided by physicians in the primary care setting,” Smith adds.

Beginning in 1967, Medex Northwest was founded in Seattle by Dr. Richard Smith (no relation to Michael Smith) to improve access to health care. The founder also wanted to provide a path for medically-trained military personnel to become midlevel health practitioners.

“They looked at individuals who came out of the military, especially combat medics of the Vietnam era who had all these skills, but there was no civilian equivalent for their training,” Michael Smith says. “So the program looked at filling out what they needed.”

He adds, “Medex is the second oldest physician assistant training program in the U.S. Duke University was first. It stemmed out of a shortage of physicians in the late 1960s.”

While the first Seattle physician assistant class formed by 1969, Spokane became a Medex site about 21 years ago, with the 20-year class set to graduate in August, and class No. 22 starting online now. Tacoma was added as a Medex training site in recent years.

Gonzaga is a partner in the UW’s regional, community-based medical education program, WWAMI, which stands for the states it serves: Washington, Wyoming, Alaska, Montana, and Idaho. The Medex Spokane program, which moved to Schoenberg nearly two years ago after being on the Riverpoint Campus previously, employs four full-time and two part-time faculty members, along with a clinical coordinator, and two employees.

Smith, who also teaches, became a physician assistant after being a military medic. He and other instructors teach courses “across the board,” including for adult medicine, pharmacology, maternity and child health, and professional development.

Industry standards for training also have evolved, and in recent years Medex has required that by 2019, all students graduate with a master’s degree, rather than previous bachelor’s degree attainment. The Spokane site already is set at the master’s degree level.

“Most of our people come from other health fields,” Smith says, “It can be nursing, EMTs, paramedics, CNAs, athletic trainers, ER technicians, laboratory and radiology technicians. All our applicants are required to have medical, hands-on patient experience.”

“I’d say over 50 percent of our graduates do go into primary care,” Smith says. “Some can go into surgery and other subspecialties. Our graduates can work across the spectrum of medicine.”

Caitie Kokot, 29, also is completing Spokane classwork before clinical rotations this fall. A Mead High School graduate, she worked as a certified athletic trainer for eight years, including in Seattle, before deciding to increase her medical training. She plans to continue working in Spokane, in orthopedics or urgent care.

“I decided I wanted to advance in my career,” Kokot says. “I also wanted to return to Spokane.”

“I just wanted to be in a better position to help anybody,” she says. “I was specific to athletes before. There are a lot of people in the community who don’t have access to health care. I think a PA is a good profession to bridge that gap.”

One of Kokot’s classmates is Matt Yap, studying after five years as an emergency medical technician in Hawaii.

“I tried for Seattle and Spokane,” he says. “I was born and raised in Hawaii, but that state doesn’t have a PA program. The training experience in Spokane is good. It’s pretty tough.”

While Medex falls under UW School of Medicine, Smith says, “We are a self-sustained program funded mostly by tuition.”

“They talked about how it was very rigorous but that it really prepped them for the real world,” he says.

“There are a lot of jobs out there for PAs,” Anderies adds. “But because there is such a high demand, that also means there are not enough PAs to meet the needs of the community. As Spokane gets bigger, and with the baby boomer generation especially, the need for PAs will grow exponentially.”