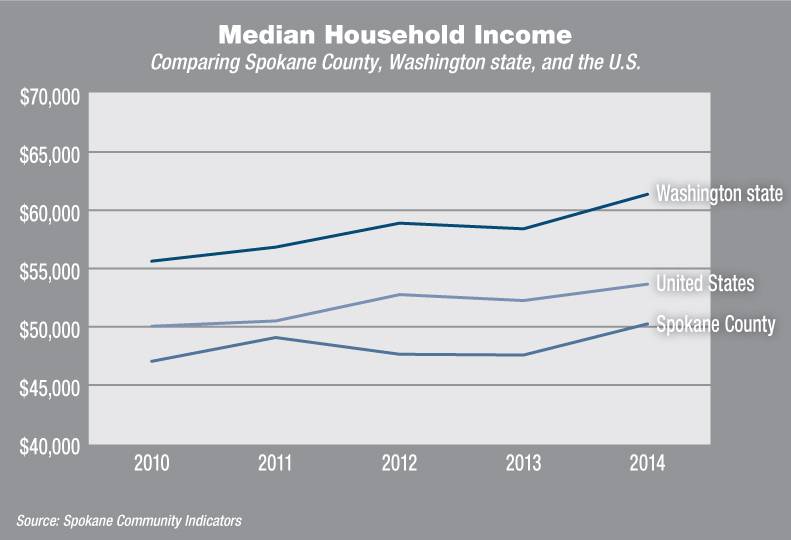 Household median income in Spokane County rose at a higher rate in 2014 than statewide or national rates for such growth, although the county still lags behind both in other income and wage measures, says Patrick Jones, executive director of Eastern Washington University’s Institute for Public Policy and Economic Analysis.

“It’s the first substantial increase since 2011,” Jones says of Spokane County’s increase. “The last couple of years, it’s been flat to declining.”

The Institute for Public Policy and Economic Analysis heads the Community Indicators of Spokane Initiative, which compiles data from a number of sources for community and economic trends, including trends in income, economic activity, real estate, labor force, and poverty.

“This is a fairly widely used scorecard of how we’re doing, or how any community, state, or country is doing,” Jones says, noting that median household income is based on survey data.

“There’s a potential plus or minus to keep in mind,” he says, meaning median household income data could have a margin of error greater than income data from auditing agencies, such as the Internal Revenue Service.

Median household income in the city of Spokane rose at an even higher rate than the overall county in 2014, Jones says.

“The city (of Spokane) seemed to really make a jump,” Jones says. “The city had been lagging Spokane County and Spokane Valley for many years.”

He says if the city of Spokane were in the center of a donut, the higher incomes tend to be distributed in the outer parts of the donut.

“That’s understandable if you think about the neighborhoods in the community,” he says.

Doug Tweedy, Spokane-based regional economist with the Washington state Employment Security Department, says some of the Spokane-area increase in median household income can be attributed to growth in higher-paying job sectors.

“Since the recession, the job base has diversified,” Tweedy says. “During the recession, the retail and leisure-and-hospitality sectors took quite a hit. Some of those jobs that went away were lower-paying jobs. They’re starting to come back.”

Other jobs generated here since the recession pay more than average, he says.

Among those, health care jobs continue to increase in number, joined by advanced manufacturing, and transportation and warehousing, Tweedy says.

Another growing job sector is the professional, scientific and technical sector, which includes legal and accounting industries and also the scientific jobs universities are creating here, he says.

The financial sector, which also includes the banking, investment, insurance, and, real estate industries, also is growing, he says.

Those sectors are continuing to create jobs this year, Tweedy says, adding that the Spokane County economy is on track to add 6,000 new jobs.

In line with that, the unemployment rate continues to improve, he says.

The labor force also had been contracting from 2010 to 2014 after it had grown by 7,000 people during the recession, Tweedy says.

“People moved to Spokane in search of work,” he says, adding that some of those people have found work elsewhere as the economy has improved or they’ve dropped out of the workforce.

Tweedy says more than half of the total household income in the county comes through wages.

Much of the rest comes through federal transfer payments, followed by investment income, he says.

Jones says the overall average annual wage in Spokane County—$42,650 in 2014—has been ticking upwards since 2010, though not as dramatically as the recent rise in median household income.

“I don’t know if that’s enough to explain the increase in median household income, but at least wages and the number of people employed are moving upward,” Jones says.