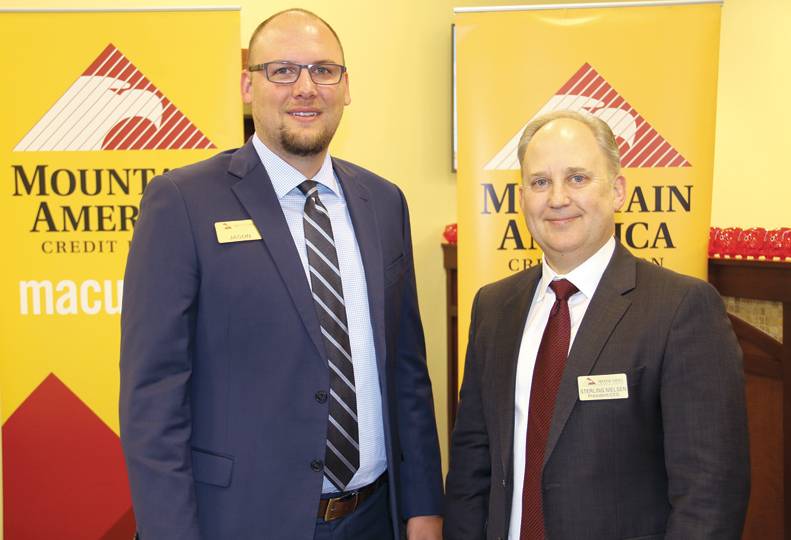 Mountain America Credit Union has taken its first step to expand into the Inland Northwest.

The Sandy, Utah-headquartered credit union now has a total of 14 branches in Idaho, having just opened its first North Idaho branch in Post Falls early this month.

The 3,300-square-foot building was formerly occupied by a branch of Inland Northwest Bank. The building recently was remodeled by Bateman-Hall Inc., of Idaho Falls.

Jason Steenstra is the branch manager for the Post Falls branch, which has a total of six employees.

Steenstra says he’s worked for the credit union for nine years and was previously the manager at its Idaho Falls branch. He and his family moved to the area several months ago ahead of the new branch’s opening.

“I’ve always enjoyed travel and discovering new places,” he says. “I saw this as a great opportunity both for myself and for my family. Post Falls is a beautiful area with so much to offer, particularly outdoors.”

Steenstra says current goals for Mountain America’s Post Falls branch will be to increase membership and expand the services it offers its current members.

“Our goal for this branch is to continue to offer better service to our existing members and keep growing even if it’s just one member at a time,” he says. “We’re very excited to be here.”

Sterling Nielsen, Mountain America CEO, was on hand for the opening of the branch June 7.

He says Mountain America has over 820,000 members, and 95 branches across five states: Idaho, Utah, Nevada, Arizona, and New Mexico.

As of March 31, Mountain America has $8.89 billion in assets, up from $7.5 billion a year earlier, according to the most recent financial statements available that MACU filed with the National Credit Union Administration. The credit union also had $7.68 billion in total shares and deposits and $7 billion in total loans and leases, up from $6.37 billion and $6.4 billion, respectively, in 2018.

“We’re one of the larger credit unions nationally. In terms of size, we’re in the top 16,” he says. “We’ve been in business for 82 years now. We started our first Idaho branch in 2011 and have seen some tremendous growth in the state since that time.”

Nielsen says the Post Falls branch is the credit union’s 14th to open in Idaho and is now its northernmost branch, with the nearest being its Garden Valley branch, some 350 miles to the south.

He says Mountain America serves an estimated 109,000 members in Idaho, with about $365 million in deposits. Although he declines to disclose how many of those members are in the Post Falls area, Nielsen says it’s a large enough amount that the decision to open a branch there made sense.

“We’d been looking for opportunities to open a branch in North Idaho for some time,” he says. “This was a good location, and an excellent opportunity to make use of an existing building rather than building new, which takes longer.”

Nielsen says Mountain America isn’t concerned about competing with other area credit unions for member business. In fact, he says the credit union is part of what’s called a shared branch network cooperative that allows its members to visit other participating branches for services and use network ATMs with no usage fee.

“The network we’re part of includes 3,500 credit unions, with over 5,600 branch locations, and over 30,000 co-op ATMs in all 50 states. All a member has to do is find a branch within our network, and they can stop in and complete all the normal transactions they would do at a branch of their home credit union.”

Nielsen says part of what makes Mountain America different from many other credit unions is its effort to encourage members to visit branches in person.

“We put a lot of focus on technology and making financial processes easy for members, and speed is important, but so is quality,” he says. “We want our members to visit branches in person, because we feel that personal, one-on-one interaction is when we’re best able to serve them.”

“Mountain America has been recognized by the Small Business Association as the No. 1 lender nationwide for the past 14 years running,” he says. “We’re very proud of our ability to serve small businesses, because we believe they’re the lifeblood of our communities.”

“Whether that’s financial education, the latest in mobile and online access, or new products that can improve financial goals, we’re focused on giving our members all the resources they need to achieve their dreams,” he says.

Nielsen says Mountain America plans to continue to grow in the North Idaho market, and would consider opening branches in neighboring Washington state if the right opportunity came along.

“We do want to keep growing here, so we’ll follow whatever opportunities arise,” he says. “We don’t currently have any plans to open a Washington branch, but if there was future member demand for services there, we’d consider it.”