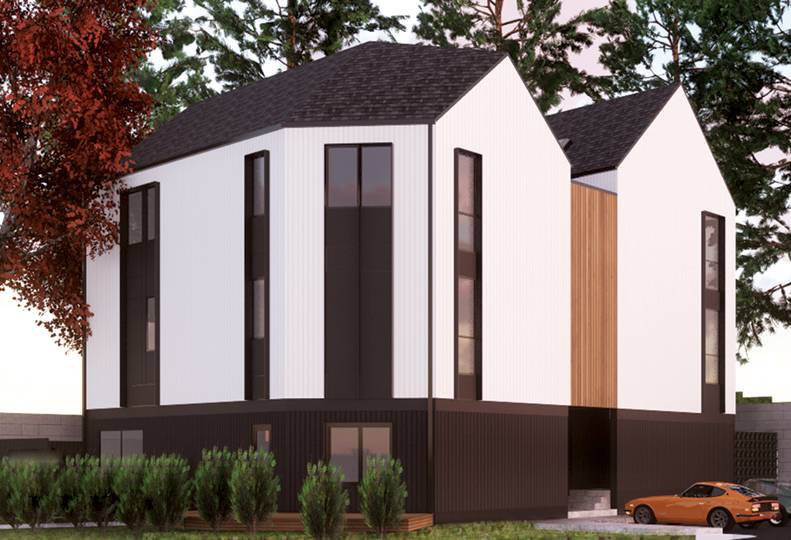 -HDG Architecture
This three-story four-plex is envisioned for a ste at 2001 W. Seventh, in west Spokane. The project is going through the predevelopment process with the city of Spokane now.

Town house-style complexes and infill developments are continuing to pop-up across the Spokane region, with over $6.7 million in smaller apartment projects planned or underway in the county.

In Spokane Valley, two projects totaling about $3 million are in the works.

The project, valued at $620,000, is being built by Kodiak General Contracting LLC, of Spokane Valley, and was designed by ML Architect, which is based in Post Falls.

Latham says the units will be two-bedroom, one-bathroom apartments that will be about 860 square feet apiece.

Construction has begun on the project and is expected to wrap up in late spring or early summer.

The project is being built by J. Rob Construction LLC and is part of a larger mixed-use commercial development that J. Heart Investment is pursuing.

Latham says the townhomes are expected to be completed by next spring.

On the 300 block of south Balfour Road in Spokane Valley, Hayden-based GT LLC is building two, 9,250-square-foot six-plex townhomes, dubbed the Valley Pointe Apartments, for a total of just under 22,000 square feet of space including the planned attached garages.

The two-story units will have a total living area of 1,525 square feet each according to site plans. Each unit also will include a porch on the front of the building and a rear patio.

Copper Basin Construction Inc., of Hayden, is the general contractor on the $2.4 million project, which was designed by Post Falls-based Reality Design LLC and Spokane-based Wyatt Architects and Associates.

A representative for the project couldn’t be reached immediately for comment.

In Spokane, a $3 million, 30-unit townhome project, dubbed the Lyons Townhouse, is planned for 1210 E. Lyons.

Two, two-story structures will each house 15 units that will be 1,040 square feet apiece, says Joe Pence, owner of Pence Properties Inc., which is both the contractor and the developer for the project.

The project, totaling 15,300 square feet of building space, is currently in predevelopment. Pence says construction is expected to start in November and wrap up by June 2020.

Whipple Consulting Engineers Inc., of Spokane Valley, is providing engineering services for the project, which was designed by Wyatt Architects.

The structure is expected to be three-stories tall and to include a total of 5,400 square feet of residential space.

Plans included with the predevelopment application show the main floor will house the living room, kitchen, powder room, and a washer and dryer.

A total of eight parking stalls are noted on the plans, as well as two main floor outdoor patios on the southern-most side of the building.

No contractor is listed on the site plans.

Spokane County Assessor’s Office records show the property is owned by D&G Holdings LLC, which purchased the 0.16-acre property in June for $80,000.