Some compare growth trend to that of breweries in INW 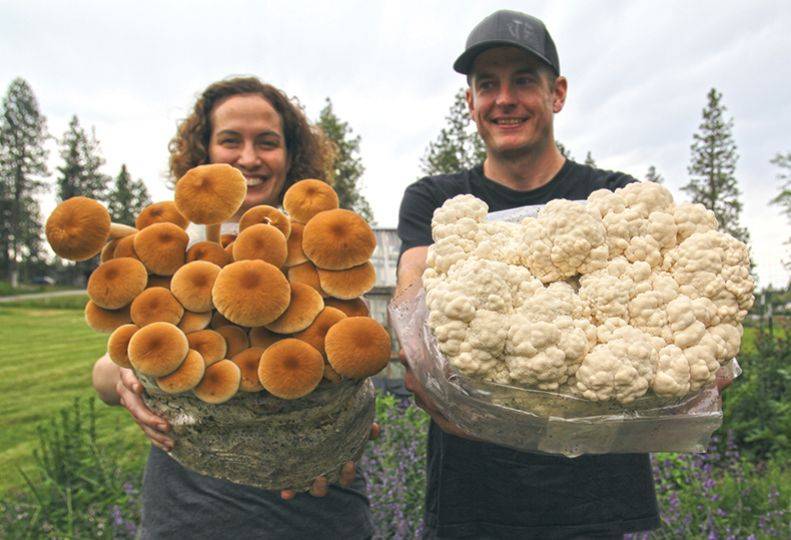 Josh Yake, founder and owner of Gourmet Foragables & More, of Spokane, says he remembers when he was the only mushroom vendor at Inland Northwest farmers markets.

But over the last couple of years, he’s seen growth in fungi vendors here, particularly among boutique mushroom farmers.

“There are so many mushroom farmers now,” he says.

According to the market research firm IMARC, the global mushroom market was valued at $58.8 billion in 2021 and is estimated to reach $86.5 billion by 2027.

Krysta Froberg, owner of Happy Mountain Mushrooms LLC, has been involved in growing mushrooms for the past 10 years and started her own mushroom farm in 2017.

Froberg recently moved her farm from a 700-square-foot facility on the South Hill to a 2,500-square-foot facility in Colbert, which will enable her eventually to produce between 400 and 500 pounds a week, she says. Froberg grows 12 different mushroom varieties, half of which are oyster mushrooms. Other varieties include pioppini, chestnut, and lion’s mane.

For the last couple of years, Froberg also has been working for a mushroom consulting company that sets up mushroom farms all over the world.

“Every town I go to, there is a mushroom farm,” she says, “And if there’s not, someone usually starts one.”

Happy Mountain sells its mushrooms to the Grain Shed restaurant, Durkin’s Liquor Bar, and Inland Pacific Kitchen. On the grocery side, Happy Mountain’s mushrooms can be found at Rocket Market, on the South Hill, and Pilgrim’s Market, in Coeur d’Alene.

Froberg says she follows a vegan diet and relies heavily on mushrooms in every meal for protein and fiber.

She says customers often ask which mushroom is the best meat substitute.

“My favorite is the black oyster,” she says. “It shreds easily, you can make pulled mushrooms, and it soaks up any marinade or seasoning.”

Although hailed by chefs and vegetarians for their meaty texture and savory flavor, mushrooms have long been used for their medicinal benefits as well.

Chelsea and Rob McFarland, owners of Far Land Fungi, have found a steady customer base interested in the couple’s medicinal mushroom tinctures—concentrated liquid extracts that are made by soaking fungi in a solvent, such as alcohol.

Rob McFarland says, “I thought, at the farmers market, the fresh mushrooms would be flying off the shelf but really it’s our tinctures we can’t make fast enough.”

In the couple’s home, they use about 1,500 square feet of space for mushroom growing, and, depending on the week, can harvest as much as 300 pounds.

“Everything that we grow, grows on trees,” says Rob McFarland. “We don’t grow anything that grows on compost or that you see growing on the ground.”

“That really took our production to the next level,” she says. “Before, we were just using a pressure cooker.”

Rob McFarland explains that the sawdust used in plastic bags to grow mushrooms needs to be sterile so that no bacteria or other organisms compete with the fungi. He cooks the sawdust for about 16 hours. He grows mycelium—the root-like structure that forms underground—on grains such as rye berries, millet, and sorghum. Once the mycelium has colonized the grains, he can take a handful of those grains and place them in the sterilized sawdust.

Once the mycelium colonizes the sawdust, it’s ready to go into the fruiting chamber—a dark, temperature-monitored room where the fruiting bodies of fungi, such as mushrooms, can grow.

Far Land Fungi offers reishi mushroom tinctures, and lion’s mane tinctures, which are known for medicinal benefits, according to the National Institutes of Health.

Chelsea McFarland says, “Reishi has been one of the most studied mushrooms on the planet for the last 5,000 years and has been used medicinally in various cultures.”

According to the National Institutes of Health’s National Library of Medicine, reishi mushrooms can bolster the immune function through their impact on white blood cells, which help fight infections and cancer.

Lion’s mane mushroom is a white, furry type of mushroom that typically grows on the trunks of dead hardwood trees such as oak. It is known for the health benefits it has on memory and brain function, particularly lifting brain fog, claims Chelsea McFarland.

She says she was excited to sell London Fog teas along with a half-vile of lion’s mane and cordyceps mushroom tincture at the Medical Lake Founders Day Fresh Market held June 17-18. With locally sourced ingredients like Earl Grey tea from Revival Tea and syrup from Side Hustle Syrups, she sold the tea and tincture as a package, calling it “Spokane Fog.”

Cordyceps mushrooms are the third medicinal mushroom the couple has dabbled with, known for bringing up energy levels and typically used post- workout by athletes, says Rob McFarland.

Cordyceps have evolved to grow like a parasite out of the brains of insects. They are typically orange and long. “It’s like a Cheeto looking mushroom growing off some fly or ant,” he explains.

Over the last 10 years, mushroom farmers have figured out how to grow them on rice with a nutrient supplement that contains minerals that replicate certain components of an insect, he says, adding, “We’re figuring out how to do that in a way that we can scale up.”

Depending on the variety of cordyceps, the mushroom can fetch in the hundreds to even thousands of dollars per pound.

The McFarlands have years of experience in farmers markets in Los Angeles, where they worked to educate the public on beekeeping and getting the Los Angeles City Council to legalize beekeeping in the city limits.

They moved to Spokane, which is Rob McFarland’s hometown, in 2019 and sell eggs, fresh cut flowers, and honey as additional sources of income.

The couple also sells mushroom growing kits, such as logs that have been inoculated with mycelium that can produce fruit for many years.

“We are about growing health and happiness,” says Rob McFarland.

Gourmet Foragables’ Yake started the business in 2010 after he quit his job with the state and decided to make a living foraging from May to October for mushrooms, berries, and other wild harvests like spring nettles, and ramps—garlicky onion bulbous vegetables.

He says his niche in the Spokane mushroom market comes from harvesting and selling wild fungi that cannot be grown on a farm. His most popular fungus is the morel, a small, light-brown mushroom with a honeycomb structure cap.

Morels sprout in the spring following rain. Yake finds them in forest areas that were scorched during the previous wildfire season.

Morels also are known for having a meat-like flavor prized by chefs, vegans, and vegetarians.

“The taste is just wild … better than steak,” he says.

The other mushroom that Yake forages and claims nobody is growing is the porcini mushroom.

“It has a symbiotic relationship with the roots of old growth forests,” he says. “You can’t replicate those conditions in a lab.”

He began selling mushrooms by placing a box of chanterelles in the front yard of his house on Maple Street. From there, he made friends with chefs who enjoy cooking with wild mushrooms and then began working in farmers markets. In 2015, he bought out a competitor, the Mushroom Source, a local family business that had been foraging since the 1980s. In buying out his main competitor here, he also picked up its vendor and pickers’ accounts.

“I’ve got networks and sources and locations,” he says.