New colleagues step into deanships together at WSU 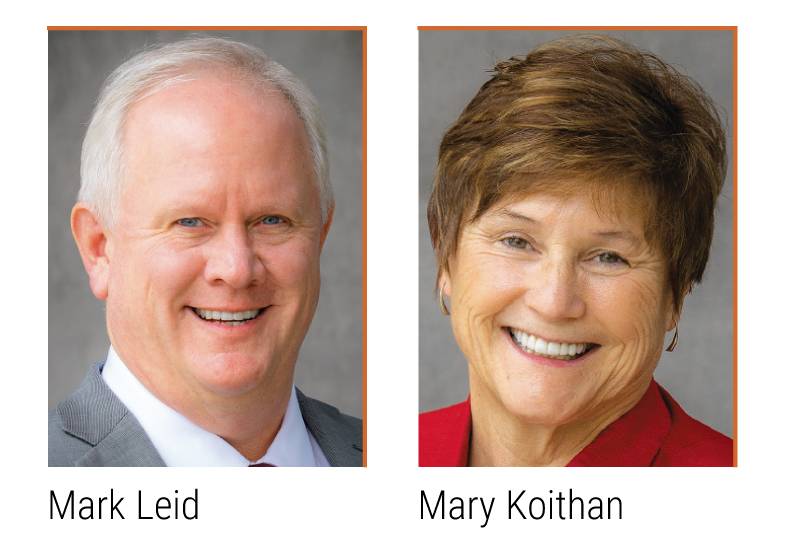 After spending more than the past two decades with their previous employers, Mary Koithan and Mark Leid each saw an ideal opportunity when they accepted their positions as deans at Washington State University’s Health Sciences Spokane campus.

Koithan, 64, left the University of Arizona, in Tucson, Arizona, where she’d spent 22 years, to become WSU’s College of Nursing dean. In Arizona, she had been associate dean at the university’s nursing school, she says.

Meanwhile, Leid, who is 60, was named dean of WSU’s College of Pharmacy and Pharmaceutical Sciences. A graduate of WSU’s pharmacy college, Leid has spent the past 28 years at Oregon State University, in Corvallis, Oregon, as a professor, researcher, and associate dean of OSU’s pharmacy college.

They both started their new jobs on July 1.

“I could see the three of us working really, really well together,” says Leid of he, Koithan, and Dr. John Tomkowiak, the founding dean of WSU’s Elson S. Floyd College of Medicine.

Starting their jobs in the midst of a pandemic, Koithan and Leid arrived just in time to see the WSU Health Sciences Spokane campus secure a record amount of grant and contract awards.

In the fiscal year 2020, which ended June 30, researchers raked in $37.6 million in grants and contract awards. The amount more than triples the $10.5 million in grants and contracts that were generated in 2011, the fiscal year in which WSU Spokane was designated officially as the health sciences campus, says Kim Papich, the campus’ communications and public affairs director.

The National Institutes of Health, the nation’s medical research agency, which is overseen by the U.S. Department of Health and Human Services, is the largest federal awarding agency for the overall WSU system.

The funding for research is comprised cumulatively of numerous grants – mostly federal – that arrive throughout the course of the year.

Established in 1989, WSU Health Sciences Spokane has 1,727 total students, 88% of whom are Washington residents.

The college has 228 full-time and 114 part-time instructors, and among the 342 faculty and 311 graduate students, most are involved in some level of research or scholarship, WSU records show.

Leid earned his undergraduate degree in 1983 and spent two years practicing community and hospital pharmacy in Walla Walla, Washington, where he was born. He was raised in the nearby rural farming community of Waitsburg, he says.

The new deans say they each share Tomkowiak’s passion for the pursuit of extending basic and expanded health care to underrepresented communities.

“And we don’t have to look very far to find those disparities,” Koithan says.

Both Koithan and Leid began interviewing for the WSU positions last fall. In the process of doing so, Leid said he researched Koithan to get more of a perspective on her background.

“It was clear that Mary is a real outstanding clinician, and she has a real gift and skill at being able to expand the diversity base of not only the underrepresented but among the ranks of those around here,” Leid says. “I really want to be able to tap into her expertise.”

Koithan says the decision to leave Arizona weighed greatly on her, particularly so as the ravages of COVID-19 began having an effect on that state. She served as member of the University of Arizona’s pandemic response team.

“It was tough. As time went on, I kept wondering if this was the right decision to make,” she says.

There are many similarities between southern Arizona and Eastern Washington, in that both places have a single urban area and are largely remote. Ultimately, her decision to leave Arizona rested on the fact that she’d get an opportunity to head up a department.

“Being in the dean’s position allows me to have the greatest influence,” she says.

There are times, however, that being new is challenging, she says.

“After 22 years in a place, you realize that you don’t have your connections and support system in (another) place,” Koithan says. “But fortunately, the folks here are incredibly kind and gracious.”

On the immediate horizon, the nursing college is having conversations with Providence Health Services regarding the development of an acute care nurse initiative that could help area hospitals reduce gaps in acute care services to patients, she says.

Leid says the college of pharmacy will take an even more aggressive approach as it looks to secure continued grant dollars.

WSU Health Sciences has a strong infrastructure in place, despite the presence of COVID-19, he says. By contrast, he points to his wife, also an Oregon State University researcher, whose salary recently has been reduced there.

Despite the momentary separation from his family, Leid, like Koithan, says the time was right in accepting the position.

“I loved the research part of my career,” he says. “But when you get to this age, the reality is that not many more of these opportunities will present themselves.”