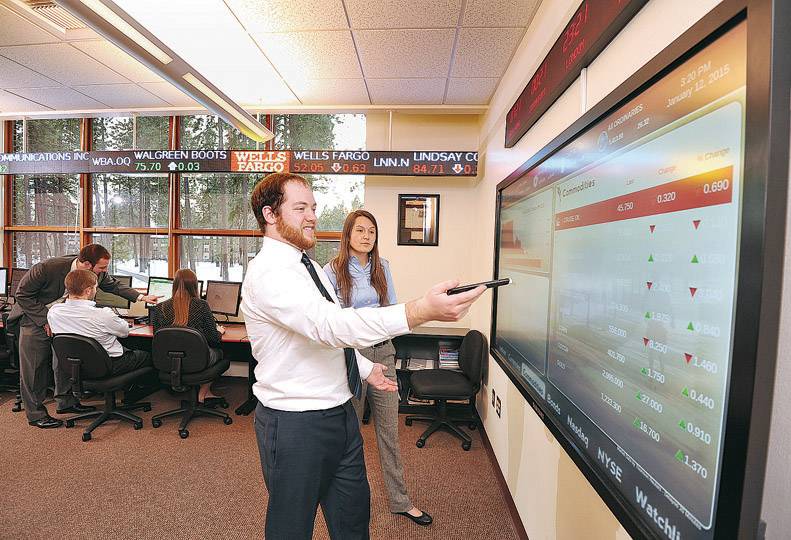 Every Thursday morning at 6:15 a.m., Whitworth University senior Ashley Sievers can be found on campus in a high tech trading room, discussing stock pitches and portfolio allocations with other members of the Whitworth Student Investment Group.

The H.H. “Larry” Larison Trading Room, named in honor of the Spokane businessman who donated funds for the dedicated trading space, includes an interactive screen, an electronic ticker that runs the width of the room, and nine computer workstations where students research and determine which stocks the group will buy, says Sievers.

Located on the second floor at Whitworth’s Weyerhaeuser Hall, the new space was built over the summer after being funded last year. Whitworth administrators declined to comment on the dollar amount of the donation. Students moved the group into the space in fall 2014 and a dedication ceremony was held in mid-October.

Sievers says the new trading room has given the group access to the latest software, and technology that makes it much easier to do research.

“It is our dedicated space for research and it’s a meeting place for our students,” she says. “It was a very generous donation and we are very grateful to have received these items.”

Launched in 2012, the idea for the Whitworth Student Investment Group was proposed by seven Whitworth students. The students designed a proposal for the investment group and presented it to the board of trustees, who, in turn, agreed to provide them with funding. WSIG received approximately $100,000 to be managed in equities and exchange-traded funds, as described in an earlier story in the Journal.

Unlike other classes, this is no simulation or theory. The group invests cold, hard cash, and the WSIG answers to the Whitworth board of trustees.

“Since inception we have made $11,128,” says Sievers, an accounting and economics major.

Sievers, who served as vice president of the group last year, was one of the original seven members of the group when she was a freshman.

Sievers says she has learned an enormous amount not only about the stock market, but also about herself. “The stuff we’ve learned they can’t teach you in a classroom,” she says.

She says the experience has improved her self-confidence and boosted her leadership skills.

“Learning how to lead has been a great experience,” she adds. “I was in a leadership role as a sophomore and was in charge of juniors and seniors who had 10 academic majors.”

Brian “Duff” Bergquist, executive-in-residence for the Whitworth School of Global Commerce & Management and the club’s adviser, says students have been blessed to have the opportunity to join the group.

“They have been able to leverage their classroom learning in an investment fund with real profit-and-loss consequences,” he says.

Bergquist’s job is to assist students with training when they need it and ask for it, and to critique ideas.

Bergquist says the WSIG is focused on a value investing model, which involves selecting stocks that are believed to be trading for less than their intrinsic values.

The trading is currently done through online brokerages such as Charles Schwab. The investment returns are added to the Whitworth endowment.

“Bergquist has worked in finance all his life, and he’s not afraid to let us screw up,” Sievers says. “He does have the power to veto any of our stock choices, and he comes to all early morning meetings to make sure we’re asking the right questions, but he has a lot of faith in us.” She adds that Bergquist, so far, hasn’t vetoed any of the group’s choices.

WSIG isn’t tied directly to the business school, chartered through the Associated Students of Whitworth University, or open only to students in business-related majors, Bergquist says. The group is open to all students regardless of academic major.

To join the group as an “analyst,” students must take a six- to eight-week training course run by club officers, pass an interview with other group members, and then be voted in. The club currently includes 35 to 40 student members. Sievers says at one point last year there were more than 55 student members. “Investment group members don’t receive class credit for being a part of the group.”

Sievers says students break into smaller groups defined by sectors much like stock market sectors. She says while many students are accounting, math, or economics majors, members usually represent 10 to 15 different majors, including history and philosophy.

“We’re all over campus,” she says. “There are a lot of unique majors and minors.”

The sectors in which the club invests include energy, health care, utilities, pharmaceuticals, and the Standard & Poor 500 index. Smaller groups comprised of four to eight students in different sectors also meet once a week, and communicate online as well. Each sector pitches its favorite stocks to the larger group, which then votes on stocks that students believe will perform the best.

“A lot of what we do is research those individual sectors, take the best from those sectors, and present to the larger group,” Sievers says. “Then we will answer questions, take a week and do more research, and we wait another week, research and then ask more questions and determine if there are any extra concerns. Then we vote,” she says. The time from the beginning of the process to buying stocks is about three weeks to a month. “What’s important is asking what will affect stocks in a given sector,” she says.

“It’s a pretty big responsibility really that we could lose that $100,000,” she says. “It’s a huge deal, and so much more pressure than anything else we do. But it’s an awesome opportunity to use what we’re learning in the classroom, in real life. The experiential learning we get is invaluable.”

She adds that the students know they have to look trustees in the eye and tell them what they’ve done with the money, and have to prove that they’ve not wasted it.

Since the WSIG started investing, typically all of its stocks have gone up in value, and then were sold after reaching a set target value.

But about a month ago, Sievers says, a petroleum stock the group had been holding fell drastically in value, which resulted in the group’s first experience with a significant decrease in stock value. Over the past two months, she says, it’s been very volatile.

“We had all these stocks that we held for four months to year, and we would sell them and come out with a profit. It’s been new to have something not go well,” she says. “(This particular stock) has gone down significantly since we bought it.”

She says the current climate is definitely the worst case scenario for an oil company, but the students will continue to hold on and watch it.

“We think it’s worth more than the market price, and it is still under what we bought it for,” she says.

She says WSIG will probably hold the stock until it goes back to what is considered its target price, and then will sell.