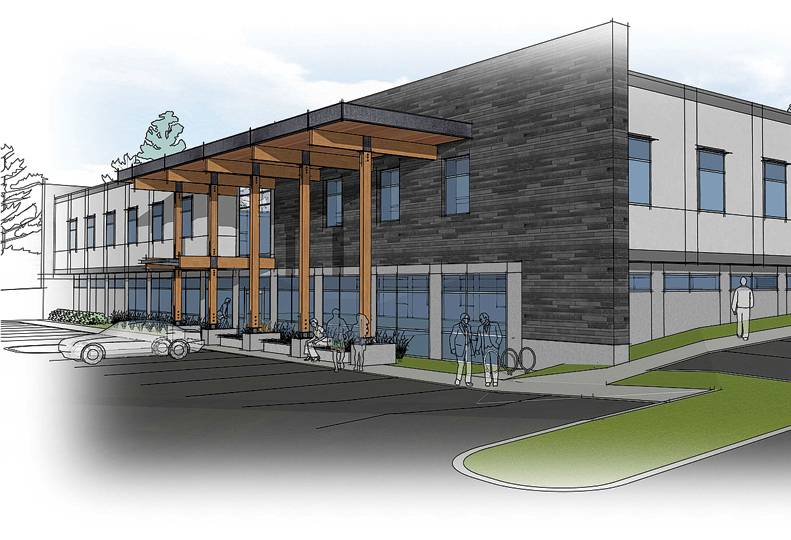 -Bernardo|Wills Architects PC
The two-story medical building is envisioned for a site near the southeast corner of Washington Street and Sixth Avenue. Construction could start next spring.

A two-story, 20,000-square-foot medical office building is planned on the lower South Hill, the architect on the project says.

Ryan Zane, of Spokane-based Bernardo|Wills Architects PC, says tenants for the building, at 613 S. Washington, haven’t been secured, but a few potential tenants have expressed interest.

While the construction value for the building shell is estimated at about $2.4 million, Zane says that doesn’t include tenant improvements, which are difficult to estimate for medical office buildings.

“It’s hard to say because it depends a lot on the tenants that go in,” he says. “The shell is one thing, but if somebody comes in with an ambulatory use or something like that, then new tenant improvement costs go way up.”

Construction isn’t expected to start until next spring, Zane says, because Horizon Credit Union currently occupies part of a 25,000-square-foot building on the site of the future office building.

As previously reported by the Journal, Spokane Valley-based Horizon Credit Union is constructing a 3,100-square-foot, $900,000 standalone branch on what was a parking lot for the credit union. The branch is expected to be completed later this year. Bernardo|Wills is also the architect on that project.

Once the new branch is constructed, Zane says the old building will be demolished, and construction will begin on the medical office building. That project is expected to take about a year to complete.

Spokane-based Baker Construction & Development Inc. is the contractor on both the medical office building and the new Horizon Credit Union branch.