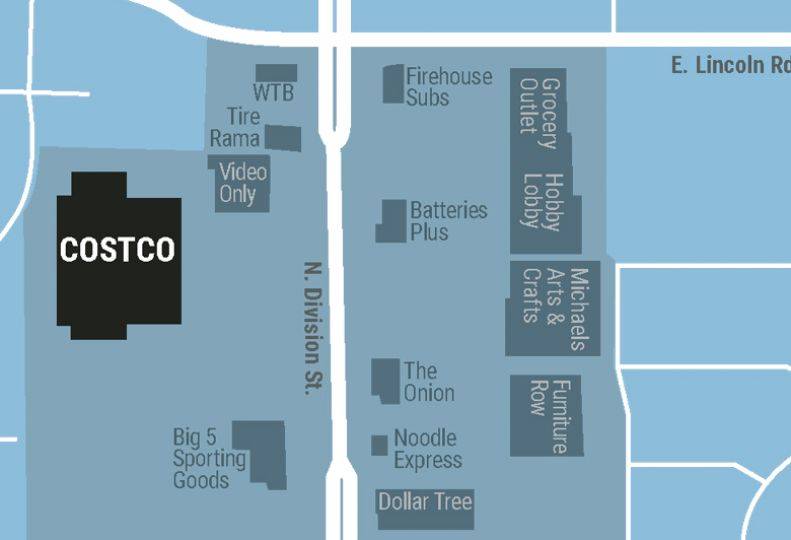 The company also plans to construct two or three more buildings on a portion of the property currently occupied by Costco’s fueling stations, Vena says.

In total, he estimates Rich Development will invest about $15 million in redeveloping the building, located at 7619 N. Division, once Costco moves to its new warehouse building that’s under construction north of Spokane.

The North Division property, which includes the warehouse store, gas station, and parking areas on 15 acres of land, currently is in escrow while Rich Development determines the extent of remodeling that will be needed at the warehouse, Vena says, adding that such work will be dependent on what tenants will occupy the building.

He says the real estate transaction likely will be completed next fall, after tenants have been secured and project development plans have been approved by the city of Spokane.

Tenants “are being identified currently, and space is still available for lease,” says Vena.

Vena declines to disclose the terms of the planned real estate transaction. Spokane-based commercial estate brokerage NAI Black had marketed the property for sale for $7 million.

“We think it’s a terrific property with a great building on it,” he says. “Costco builds some very nice buildings and maintains them well.”

Steve Ridenour, a broker with NAI Black, is handling the transaction and is marketing the property for lease on Rich Development's behalf.

Vena says the property, near the southwest corner of Division Street and Cascade Way, is also along a highly traveled roadway and within a prime retail area in the city, reasons contributing to Rich Development’s decision to invest there, he says.

Despite potential for remodeling, the warehouse will still stay the same size, at 134,000 square feet. Some new store entrances and storefronts could be added, and other aspects of the warehouse could change. While the space most likely will contain multiple tenants, it’s still possible that one company could lease the entire building, Vena says.

Rich Development is looking to attract a variety of retailers and businesses, including fitness industry-related companies like trampoline parks, indoor racing, rock climbing, or health clubs, along with warehouse storage or something similar for light industrial uses, says Vena.

The company hopes to start construction on the two or three new buildings in early 2019 and wrap up construction that fall. Those buildings would collectively occupy between 10,000 to 15,000 square feet of space aimed at future restaurant or retail tenants, he says.

Rich Development’s Bellingham property will house Hobby Lobby Stores Inc., HomeGoods, and Sierra Trading Post Inc. outlets, which are expected to open in April or May. Rich Development also plans to build a 4,500-square-foot structure there, but that construction hasn’t started yet, says Vena.

The retail warehouse will include 167,000 square feet of space, and the project also involves a 10,400-square-foot fueling station and an 819-space parking lot.

Seattle-based MG2 Corp. is the architect.

The Newport Highway site is more than a mile north of the Spokane city limits and about 3 1/2 miles north of the current North Division Street Costco location.

The new store will replace the north Spokane Costco outlet, meaning the county will benefit from one of the Spokane-area’s largest single generators of sales tax revenue that the city currently receives.

The new Costco site is on 20 acres of land, which is part of a mostly undeveloped 433-acre parcel owned by Foothill Ranch, Calif.-based Kaiser Aluminum Investments Co.

The larger parcel is part of a tax-increment financing district, which is intended to attract additional economic development with the potential to reimburse developers who construct public infrastructure improvements there.