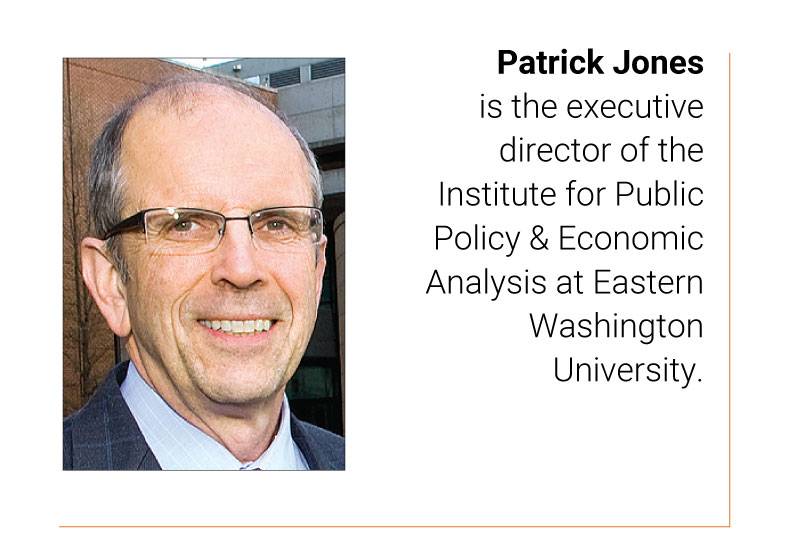 Ever thought it’s those out-of-towners who have driven up housing prices here recently? You probably aren’t alone.

After all, the median house price for resale has climbed from approximately $284,000 to $330,000 over the past four quarters.

That $46,000 represents a 16% bump, a steep one for buyers. Spokane’s median price, while still considerably lower than the state value, cruised upward at a slightly higher pace than Washington’s median, which rose 14% over the past 12 months. (Supporting data is available on Eastern Washington University’s Spokane Trends website.)

Prices reflect many forces, both demand and supply. The key drivers of housing demand are income, financing, and population. Incomes here have moved upward in the past few years, but at a rate not too far from historical rates. For sure, mortgage rates have plummeted, leading some homeowners to consider trading up and some renters to consider buying.

Population growth, too, has surged over the past four years, relative to the past two decades. And like most western U.S. cities, Spokane’s population has expanded largely due to migration.

Local families continue to keep OB-GYNs busy, but in the larger scheme of things, it is migration that moves the population needle. For example, from April 1, 2019, to April 1, 2020, the number of heads in Spokane County rose by 7,350. Of those, 85% can be attributable to net migration.

Has it been just me who has seen more out-of-state license plates on Division Street or Interstate 90 since the pandemic struck? Observations from behind the wheel are not optimal research techniques. Thankfully, we can look at a public data series: driver’s license surrenders tracked by the Washington state Department of Licensing.

The surprise result for the first 11 months of the year: out-of-state license surrenders have dropped. From January through November the Department of Licensing reports about 7,700 new residents from outside of our state exchanging driver’s licenses. That total is down from 9,160 and 10,830 for the first eleven months of 2019 and 2018, respectively. So much for casual empiricism.

In retrospect, that shouldn’t be too surprising. The early months of the pandemic’s outbreak put a hard stop to mobility in this country.

Undoubtedly, the low numbers from this year are due to the closure of state offices for a good part of the quarter. Yet the third quarter, when obstacles to reregistering ostensibly were removed, didn’t compensate for the prior quarter. Licensing data show a gain of little more than 200.

In sum, the continued discovery by those from out-of-state, so strong in the recent years, shifted gears in 2020.

Yet, inflows might still be strong from movers within the state. The U.S. Census tracks annual flows from county to county in the U.S, compiled over five-year intervals. The most recent period is 2014-2018. It clearly shows the flow of Washingtonians to our county to be considerable.

Over that interval, the ratio of new residents to Spokane from Washingtonians to those outside of the state was just slightly below even. That is, a few more new residents have recently come from outside the state than from the other 38 counties in Washington.

It might be the case that the pandemic has changed that relationship, making it relatively easier for residents of Evergreen State counties to move here than those from hundreds of miles away.

In fact, among the top 10 U.S. counties contributing to in-migration here over the 2014-2018, period, seven were in Washington. Ranked by size of their flows, these were: Snohomish, King, Benton, Grant, Pierce, Stevens, and Lincoln counties.

Of the two out-of-state counties, one, not surprisingly, is neighboring Kootenai County, and the other, perhaps surprisingly, is Maricopa, Arizona. Though not a county, Asia as a whole rounded out the top 10.

Most of us have heard anecdotes about neighbors or friends of friends who have moved here from the central Puget Sound area. Many of the accounts describe the new residents as remote workers. That arrangement may well be part of the new normal for our economy and in particular for tech workers.

If so, these new neighbors symbolize a hope held by many in the economic development community: Someday Spokane will benefit from an arbitrage of labor from high-cost to lower-cost urban centers.

It is this observer’s hunch that current movement from other Washington counties has mirrored the decline of out-of-state new residents in 2020.

As a consequence, fingers can’t be pointed at Seattleites for the dramatic run-up in housing costs. Until we have data for 2020, we simply won’t know.

Attempts to explain housing prices solely to increased demand, however, miss half of the equation, perhaps the greater half. The supply side must be considered. Here, as has been widely noted, the offering of Spokane homes has been lowest on recent record.

The Washington State Real Estate Research Center, source for some of the housing data on Spokane Trends, tracks the number of listings by quarter in the county. For Q3 2020, the most recent quarter for which data are available, the count stood at 558. Compare that with 1,158 listings in Q3 2019, or 2,562 listings in Q3 2015.

Population has grown, incomes have grown, financing has gotten much more favorable, yet supply has diminished. Clearly this is a textbook case for rising prices.

The supply of homes (listings) rests on two sources: the number of local households selling their homes and the number of new homes coming onto the market.  Spokane Trends doesn’t track the latter, but does follow residential building permits, typically viewed as a leading indicator. (See indicator 2.3.3.) The graph clearly shows a peak in 2016, followed by a decline of 500 permits into 2019.

The reasons behind the decline are numerous.

They include: difficulty in securing land, the cost of developing lots, a tight labor pool in the building trades, and the rising costs of construction, especially lumber. Some of these forces might see some relief relatively soon, but others will take longer to resolve.

That is, unless hundreds of current Spokanites decided to sell and move to a different place. That doesn’t seem to be in the offing now. The pandemic has kept local residents place-bound, too. Once our community reaches a safe threshold of vaccinations, I don’t expect a big outflow. Continued low supply, growing popularity from outside the region, continued low financing costs, and no significant rise in departures imply rising home prices for the foreseeable future.