$14.5 million project slated to be finished by year-end 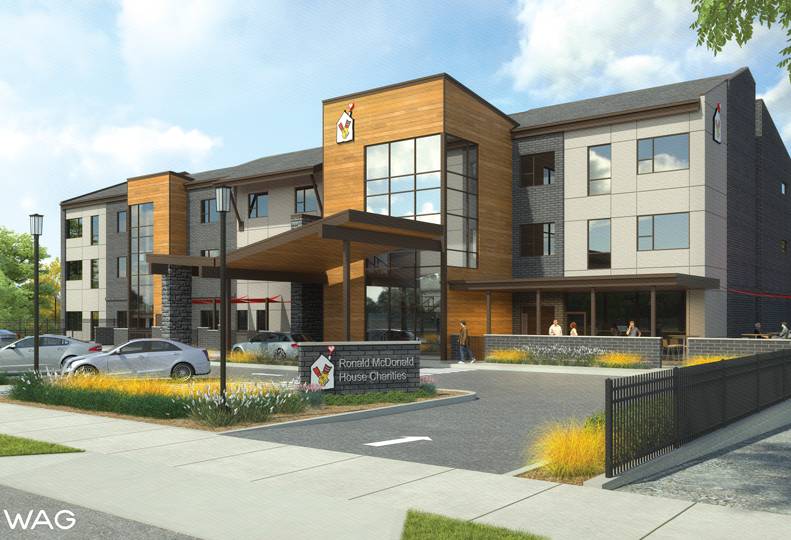 -Wolfe Architectural Group PS
The second Ronald McDonald House will have 34 private guest rooms, as well as a number of common amenities for families staying there.

The nonprofit is building the 35,100-square-foot, $14.5 million building at 1028 W. Fifth, just north of and across Fifth Avenue from the current Ronald McDonald House.

Bouten Construction Co., of Spokane, is the general contractor on the project, and Wolfe Architectural Group PS, also of Spokane, designed it.

Ronald McDonald House, which provides lodging for families while their children are in the hospital, held a groundbreaking ceremony for the project last October, but construction crews had begun clearing the site earlier that month.

Mike Forness, executive director of Ronald McDonald Charities of the Inland Northwest, says the new building is scheduled to be completed by the end of this year, and the organization plans to expand into it next January.

A ninth kitchen will be designated for families of pediatric oncology patients whose weakened immune systems could prevent them from accessing common spaces safely.

Guest rooms and common areas will be located above a two-level, 63-stall parking garage.

The current facility, which opened in 1987, has 22 guest rooms, along with a number of common areas similar to those planned in the new structure.

As of mid-March, Ronald McDonald House had raised $8.6 million of the $17.5 million capital campaign it had launched formally last fall, Forness says.

He’s confident the organization will raise the $14.5 million needed to complete construction before the end of the year, but it might take longer to generate the $3 million for what the organization is calling a sustainability fund, which is designated to support operations.