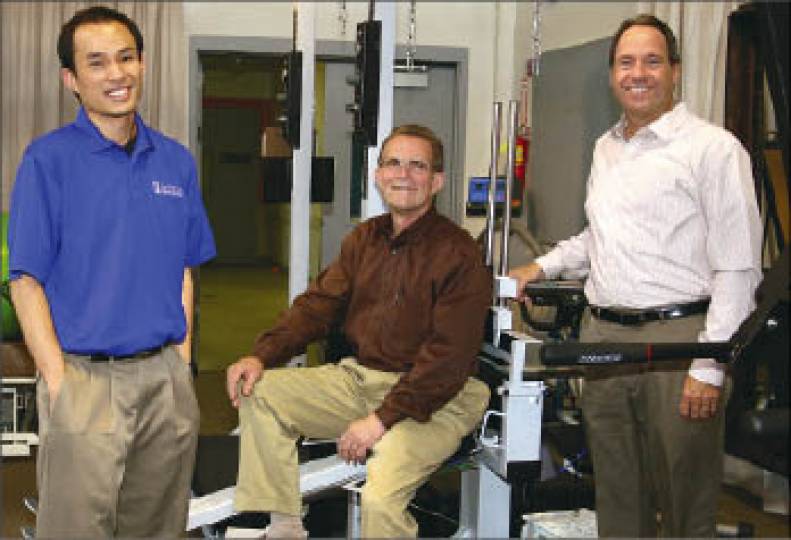 Two Spokane businessmen who invested in Sandpoint-based rehab-equipment maker Pneumex Inc. have launched a company here that hopes to create a chain of specialized rehabilitation clinics that would use Pneumex's equipment and treatment protocols.

The businessmen, Steve Neff and Paul Brown, say that after becoming shareholders in Pneumex last year and helping it secure additional capital, they became so impressed by the Sandpoint company's technology that they decided to invest in their own venture, Revita Institute Partners LLC, to market the technology under license. Pneumex, which had used the Revita name with one of its products, granted the Spokane company rights to use that name and market the Pneumex line in the Spokane-Coeur d'Alene area. Neff and Brown say they now are negotiating to extend those rights to all of Washington state.

Revita Institute Partners opened a rehabilitation clinic in January, in the Sirti Building on the Riverpoint Campus, to "prove the concept" of operating a clinic that focuses solely on Pneumex's patented equipment and the therapies designed around it, says Neff.

That clinic, which does business as Revita Institute Northwest, is headed by lead clinician Wesley Poon, a chiropractor who is treating about 50 patients a week there using what's now being called the Revita therapy model, Neff says. The clinic employs four people in addition to Neff and Brown.

Now, Revita Institute Partners is negotiating with a Coeur d'Alene physical therapist to launch a limited liability company that would operate a Revita Institute clinic within one of the therapist's three North Idaho clinics, says Brown. The Spokane company would provide equipment and practice management for that operation and would share, along with the physical therapist, any profits from the operation. He declines for now to identify the therapist.

"If that model works, then six months from now, we will then go to Seattle and start opening them up there," says Neff. He adds that he and Brown hope initially to open three to four clinics in the Seattle area using that same scenario, in which a Revita Institute would operate within an existing clinic, either physical therapy or chiropractic, and preferably with both areas of expertise.

Neff says he believes there is an adequate market to support 30 or 40 such specialized clinics in Washington, and Brown says the duo have their eyes on taking the Revita concept throughout a 10-state region in the western U.S eventually.

Meanwhile, the Institutional Review Board here, which reviews research projects that involve human subjects, is considering approval of a possible clinical study here of the Pneumex protocols to treat lower-back injuries as an alternative to surgery, Neff says.

He says that study, which would take about three to four months and would involve about 60 patients, would be led by a neurosurgical practice here, and is dependent on availability of funding for the research. He declines for now to elaborate on the study.

Pneumex's specialized equipment combines three modes of therapeutic treatment—traction, vibration, and what's called "unweighting." While various forms of traction and unweighting—essentially limiting the impacts of gravity by lifting the patient in the air or water—long have been common in treatments, and vibration has become more common in recent years, the Pneumex equipment combines those methods in various ways, and that's what sets it apart, says Poon.

Among those devices are a vibrating traction table, a pneumatic back chair and pneumatic weight apparatus, both of which can lift the patient while muscles are stretched and strengthened, and a vibration platform that's used in conjunction with tension straps and weights. Another machine combines a custom-made treadmill with the pneumatic weight apparatus, allowing the patient to walk or run without the full weight of gravity on the spine or legs.

Brown says the clinic targets patients who haven't succeeded while using other treatments, whether those are more conventional physical therapy or chiropractic sessions, drug therapy, or surgery.

Relieving pain, says Poon, is a key objective. In fact, he says, that's the main focus of the second step in the seven-step protocol Revita uses, following a patient assessment that uses a tool, also made by Pneumex, that traces the spine. That second protocol is to use the traction and vibration table, which, among other things, relaxes the muscles. Step three uses the unweighted treadmill. Next, patients use the back chair, nicknamed the Gary Payton chair, after the former Seattle Supersonics basketball great for whom the Pneumex chair was designed. Step five uses a stretching chair in conjunction with an unweighting machine, followed by a second stint in the Gary Payton chair. Last, the patient performs tension-band exercises while standing on a vibrating platform.

Not all of the seven protocols are used in every session, depending on the patient's needs, says Poon.

Currently, about half of the clinic's patients are being treated for lower-back pain, but the clinic also treats patients who have troubles with the neck or shoulder, says Brown.

Neff says the treatments are comparable in cost to a typical chiropractic or physical therapy session, and the company has established billing relationships with major health-care insurers.

He says that the current patient volume in the 10-month-old clinic, at about 50 patients a week, is still below the roughly 75 patients it needs to be "reasonably profitable," but he adds, "We're doing pretty good for being so new."

Neff and Brown met while doing preliminary organization of the Inland TechStart Fund LLC, a new seed-capital fund being formed here. Neff's background is in investment advising, with companies such as Signia Capital Management LLC and ICM Asset Management Inc., both of Spokane. Brown is a former senior manager with the Spokane office of Moss Adams LLP and currently owns Brownstone Capital Advisors LLC, which consults on succession planning, value improvement, and mergers and acquisitions. They heard about Pneumex through John Overby, director of client services at Sirti, which is providing services both to Inland TechStart Fund and Revita Institute Partners.

Pneumex, owned by Gerry and Karin Cook, has designed and built specialized therapeutic and training equipment since 1987.