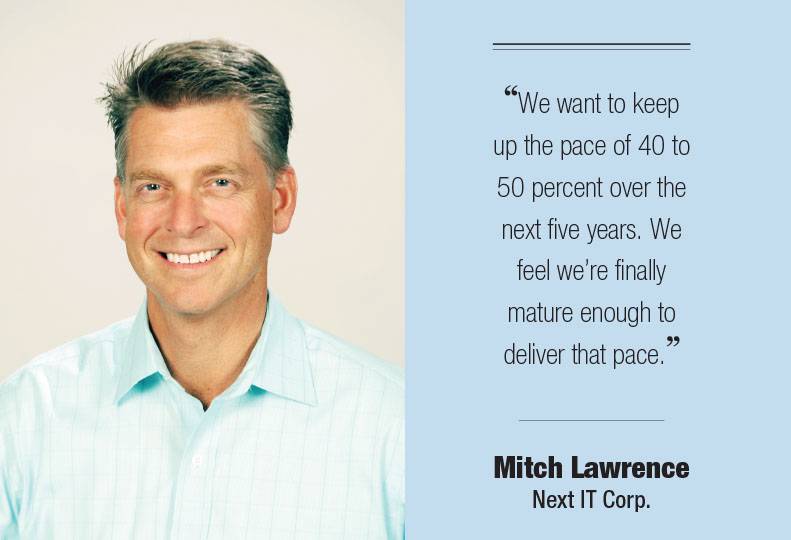 Next IT Corp., Spokane’s virtual intelligence assistant software company, has added eight new clients to its roster and expects to increase its revenues by 50 percent this year after doubling its annual income in 2013, says Mitch Lawrence, executive vice president of sales and marketing.

“We want to keep up the pace of 40 to 50 percent over the next five years,” Lawrence says. “We feel we’re finally mature enough to deliver that pace.”

The company also plans to add as many as 20 employees this year, Lawrence says. Currently, it employs 160 people, 95 percent of them in the Spokane area, Lawrence says.

Next IT develops software-guided avatars that companies and organizations use to interface verbally with their customers.

One of its better known virtual assistant avatars is Sergeant Star on the U.S. Army’s website, who answers questions from prospective recruits. Other clients include Aetna Insurance, Alaska Airlines, Amtrak, Merrill Lynch, and United Airlines.

Unlike Apple’s Siri, a voice-automated program that answers individual questions, Next IT’s software can process and understand context, Lawrence says.

After downsizing in 2008 in response to the financial sector crash, Next IT saw a comeback during 2010 and 2011, under the guidance of CEO Fred Brown, who founded the company in 2002. Previously, Brown launched and later sold LineSoft Corp., an engineering–services company that caters to the power industry.

Three of Next IT’s newest clients represent the burgeoning field of intelligent virtual assistant software for the health care field.

Alme for Healthcare, Next IT’s flagship product, was developed using a natural language model combined with an avatar, conversational and friendly in nature who can drive interactions with users around disease management and preventive health care. The goal is for a patient to establish a relationship with the avatar, empowering individuals to control and manage their own health care.

The Alme platform learns habits and preferences but before it is saved, the user can affirm those options.

“We want humans in charge of their experience. We put ourselves in the shoes of the end user,” says Lawrence.

Brown is quoted in the article as saying, “We noticed that late at night, people would have long conversations with her, because she has likes, dislikes, and a very personable manner,” Brown says in the piece. “They would even flirt with her.”

The New Yorker article talks about having a relationship with technology, Lawrence reiterates.

“There are lots of things technology can do but we’re not trying to replace human contact,” he says.

“We developed the Alme platform by taking human input, speech, touch, and how people interact into the artificial intelligence engine to help technology adapt to humans, instead of humans adapting to technology. It helps the end user when they can touch, talk and/or type to interact with the avatar.”

Lawrence cites research by Tim Bickmore, professor of computer and information science at Northeastern University whose research on health care technologies, which have traditionally targeted clinicians, have great potential to prevent illness and promote wellness, when put into the hands of patients. Bickmore has asserted that “personal health informatics” could be the key to solving the health-care crisis.

With looming physician shortages in the U.S. and more and more people accessing health care due to the Affordable Care Act, a more efficient system is needed, says Lawrence. Estimates by the Health Resources and Services Administration, the federal agency tasked with improving access to health care, nearly 20 percent of Americans live in areas with an insufficient number of primary-care doctors.

The Alme platform can extend health care professionals’ ability to deliver personalized interactions on a daily basis.  In a hospital setting, Lawrence says, patients conceivably could be discharged with a device from the health care system containing vital information.

“So they will have a virtual nurse at home with them on a device with instructions regarding medication, after care and other medical information. If patients need to ask a question over and over again, they can get an answer from someone, even if they’re not tech-savvy,” he says. “They won’t have to look at a bunch of paperwork and call a doctor or nurse for answers to their questions. They will be able to interact with a so-called ‘butler’ who will give them instructions about wound care and daily living type things, stuff people tend to forget.”

Last month, Next IT announced a partnership with Toshiba’s Digital Product Division to deliver Alme Healthcare on Toshiba tablets and laptops. Lawrence says the technology will enable health care providers to deliver personalized interactions, support those facing chronic illnesses, and help providers guide their members through the maze of complex processes.

Next IT also has worked with banking clients such as Boeing Employees’ Credit Union, the largest credit union in Washington State, to develop an internal application with a solution that simplified navigation of internal information with ‘Ask BECU,’ an intelligent virtual assistant that supports employees with accurate, relevant, and user-centric answers to their questions. Other software has helped financial advisers work with their clients and provide investment advice.

The company is working with an automotive manufacturer developing applications for the financial service sector of auto manufacturers, which will be deployed to help with credit issuance, credit applications, and auto financing.

Another area in development is an in-car application, to be built into an auto’s dashboard. A screen will display an avatar that can help drivers with topics such as how to connect with their Bluetooth, problems with garage door openers, how to deal with a flat tire, and other issues—essentially focusing on supplying information to the user from an owner’s manual.

“We will hit the demo stage of that in late 2014, and in one to three years will have a working screen, in high end cars,” Lawrence says.

He adds, “Whether it’s health care software or how to use an automobile, end users are able to input their preferences and the software will learn an individual’s habits over time as well.”

As Next IT grows the revenue side, Lawrence says it will see growth on the employee side.

“It’s been relatively easy to attract high-tech employees with the number of colleges and universities in the area graduating people with high-tech degrees who want to stay in the area,” he says.  “And a lot of tech people in larger markets like the idea of getting out of the big urban areas and into Spokane. We have some of the best geeks in the world living in Spokane.”