Investors receive another $10.9M; next distribution could be final payment 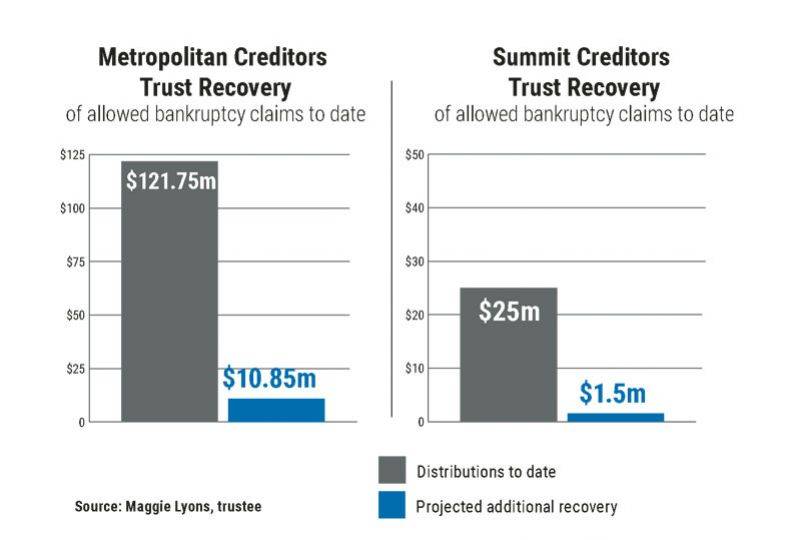 Investors who lost millions of dollars when Spokane-based Metropolitan Mortgage & Securities Co. shut down 14 years ago have recouped another small portion of their money.

The Metropolitan Creditors’ Trust, overseen by trustee and plan administrator Maggie Lyons, last month made an eighth distribution, this one totaling $10.85 million, to beneficiaries of the trust.

Investors in Metropolitan affiliate Summit Securities Inc., which also went bankrupt, won’t be receiving a distribution this year, Lyons said. To date, six distributions totaling $25 million have been made to Summit investors through the Summit Creditors’ Trust, which she also oversees. That equates to 16.6 percent for each dollar of claim filed in the Summit bankruptcy, Lyons said in a December 2017 letter to trust beneficiaries.

The two trusts were established to liquidate the companies’ numerous and widely scattered real estate assets. They originally were scheduled to terminate eight years ago, but twice have been granted five-year extensions because of difficulties in selling the various properties.

“The payment you are receiving today resulted primarily from the sale of real estate assets and the collection of receivables. We continue to make every effort to realize fair value for the remaining assets as quickly as possible,” Lyons said in the latest letter to investors.

A 367-acre parcel of land in Brea, Calif., which former Metropolitan affiliate Old Standard Life Insurance Co. had owned, remains the single largest real estate asset yet to be sold for the benefit of Metropolitan and Summit investors. Lyons said in the latest letter to investors that the property is being marketed to conservation groups and to developers interested in low-density residential projects. The property currently is listed for $5.2 million.

“The Executive Board for the Metropolitan Trust and I are hopeful the property will be sold within the next three to six months,” she wrote.

Final distributions will be substantially smaller than previously was hoped for, due largely to an adverse court ruling last year regarding a 162-lot residential development that had been proposed for the property, but that was challenged by environmental groups. Opponents of the project prevailed in a 2015 trial court ruling, and that ruling was affirmed by the state appellate court, after which the California Supreme Court denied a petition by the trusts to review the appellate court decision.

Before that legal battle was decided, Lyons had said the California property, located in Orange County, had an estimated recovery value of more than $40 million.

In past interviews with the Journal, Lyons has lamented the large number of elderly investors who have died waiting to recover some of their lost money, leaving heirs as the recipients of the final incremental payments. She said the beneficiary pool has grown in size as heirs have inherited ownership positions in the trusts. In all, the trusts have disbursed money to more than 12,000 beneficiaries.

Lyons has noted that the distributions, representing a fraction of the claims filed, also don’t include reimbursements related to tens of millions of dollars’ worth of preferred stock that was wiped out when the companies collapsed.

Many investors reportedly had big portions of their life savings wiped out and hundreds of employees lost their jobs when the $2 billion-plus Metropolitan conglomerate, widely regarded here for many years as a safe and conservative investment option, ceased operating.

Its demise, which included vacating its 178,000-square-foot, 18-story flagship building at 601 W. First, was somewhat of a precursor to the financial industry crisis that swept the country soon thereafter.

The numerous scattered real estate holdings of Metropolitan, Summit, and affiliate companies ranged at one time from 23 acres of light-industrial-zoned land in Airway Heights and nearly 100 acres of commercial land in Everett, Wash., to a ranch in Montana, a castle in Arizona, prime development property in Hawaii, and 10 acres of freeway frontage in Granbury, Texas, near Fort Worth.

It also formerly owned and hoped to develop the 78-acre Kendall Yards property northeast of downtown Spokane—then referred to as the Summit site. Coeur d’Alene developer Marshall Chesrown bought the property through a U.S. Bankruptcy Court auction for $12.8 million in 2004, but his ambitious mixed-used plans for the site faltered when the Great Recession a couple of years later caused real estate activity to plummet.

Greenstone Corp., of Liberty Lake, in turn acquired the Kendall Yards property in November 2009 from a company Chesrown headed and since then has been pursuing an aggressive development strategy to create a $500 million pedestrian-friendly urban village there.

The Metropolitan and Summit trusts were established following a bankruptcy organization plan confirmation in early 2006. The trusts originally were scheduled to be terminated in February 2011, but that was based on the assumption that all significant assets would be liquidated by then.

The liquidation process has been slowed by a number of factors, including the sheer number and complexity of the companies’ real estate holdings and related contracts, as well as the sharp decline in real estate values and demand caused by the Great Recession.