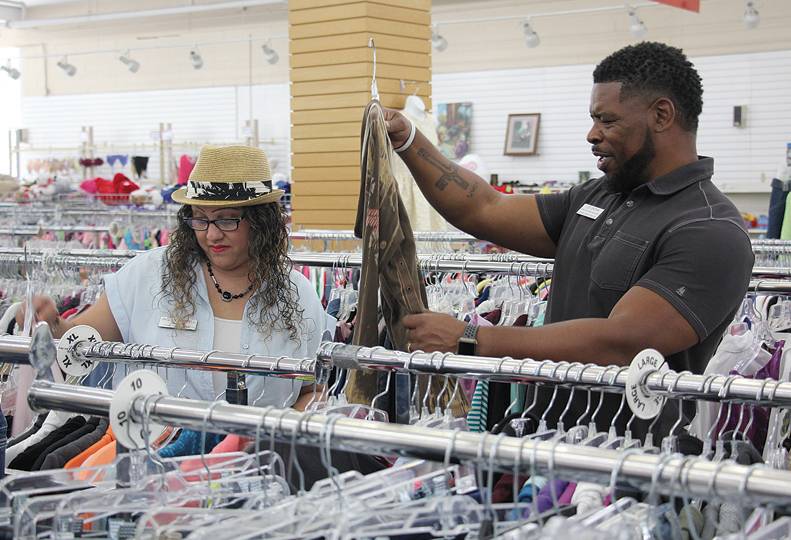 Spokane-area thrift stores associated with nonprofit organizations say donations are increasing and sales are up, meaning more funding is going to the organizations and causes those stores benefit.

While some nonprofits rely heavily on thrift store sales, others say their thrift store operations are less about making money and more about providing employment and job training.

The American Cancer Society’s Discovery Shop, at 805 W. Garland, on Spokane’s North Side, has seen such an increase in sales and donations that it hired its first employee, a part-time manager, Seattle-based senior field director Mike O’Sullivan says.

“That shop is really on the upswing,” O’Sullivan says. “Since its inception in the 1980s, the Spokane Discovery Shop has been entirely run by volunteers until about two months ago. We decided that this was an opportunity to invest in one of the Discovery Shops a little more and see how we can make it more of a member of the community.”

One of the largest nonprofit organizations in Spokane, Goodwill Industries of the Inland Northwest, is funded primarily through sales at its four Spokane-area stores. Heather Alexander, senior director of marketing and strategic communication, says that in 2018, Spokane-area Goodwill stores brought in about $27 million, while fees for services resulted in about $6 million in funding.

Sales have been strong this year, Alexander says. In July, the nonprofit took in 7% more revenue from thrift store sales than it had projected earlier.

Lee Brown, director of in-kind resources and thrift stores at Union Gospel Mission Association of Spokane, says the thrift store provided $580,000 in funding to the nonprofit last year. So far this year, the two thrift stores have brought in $97,000 more than last year, he says. According to the Journal’s most recent list of social service nonprofit organizations, Union Gospel Mission Association of Spokane had a 2017-2018 budget of $7.1 million.

“We have had an increase in sales for eight consecutive years,” Brown says. “Every year is our biggest.”

Not every thrift store run by a nonprofit, however, can provide a great deal of funding for the organization.

In 2017, the organization received $8.2 million in total revenue. Williamson says that the development side of The Arc, which includes the thrift store, contributed about 14% of the nonprofit’s 2018 net assets.

“A big thing about thrift organizations is that it’s mostly a labor of love,” Williamson says. “What you’re really putting your money in is your staff, your community.”

The thrift store provides support for The Arc of Spokane, but it also provides jobs and job training for people the organization serves who have intellectual and developmental disabilities.

She says she hopes to see a 5% to 15% increase in sales every year, but that might be more difficult next year, due to rising minimum wage and the costs of maintaining a brick-and-mortar store.

With an increase in sales, some nonprofits say they’ve also seen a bump in the volume of donated goods.

Brown says Union Gospel’s Valley thrift store, at 11921 E. Sprague, has seen a 40% increase in donations, while the donation volume at the downtown store, at 301 W. Boone, has increased by about 10%.

Part of the reason for the increase, Brown says, could be what some call “the Marie Kondo effect.” Thrift stores throughout the U.S. saw a surge of donations after the January debut of Netflix’s “Tidying Up with Marie Kondo,” a series in which the organizing expert from Japan teaches people to organize their homes.

“Thrift shopping has been a big trend lately,” O’Sullivan says. “Marie Kondo has had a little burst of energy for us.”

Brown says he hasn’t seen a slowdown of donations since “Tidying Up with Marie Kondo” first arrived on Netflix.

“We had a ton of people donating and making reference to that show,” Brown says.

“I don’t think people always think of us as having things like that,” Haisler says.