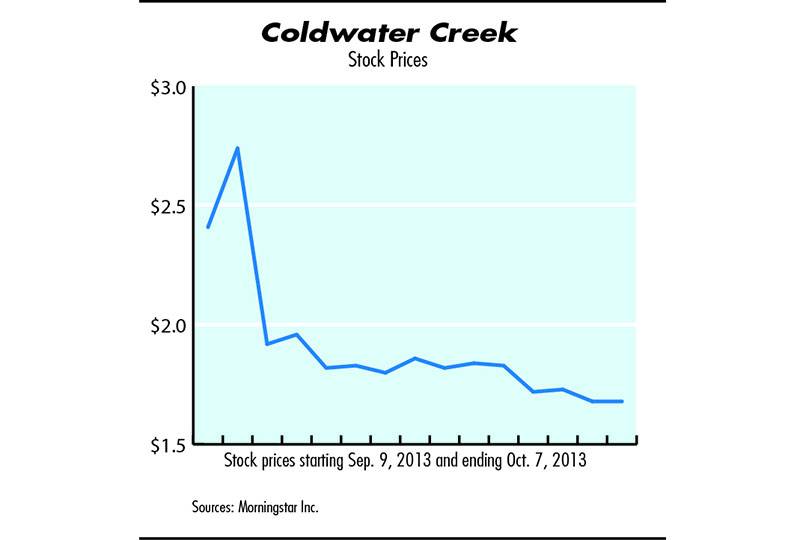 Some online prognosticators have predicted that Sandpoint-based specialty women's apparel retailer Coldwater Creek might soon succumb to bankruptcy, and a pair of market observers contacted by the Journal of Business have somewhat mixed opinions about the outlook for the company.

Craig Hart, president of Hart Capital Management Inc., of Spokane, says with the amount of cash Coldwater Creek has been burning through in recent quarters, it could be "do or die" time for the company.

After consecutive annual losses and declining sales going back more than five years, Hart says, "I think it's a survival situation now. It's like a plane going down that might be able to pull out of it at the last minute."

"Between (CEO) Jill Dean and Jerome Jessup (president and chief creative officer), the company has done a good job in terms of making the fashion direction more trend-right without losing the brand," Pierce says.

Coldwater Creek executives declined to comment for this story; Bobbi Earle, a company spokeswoman, says the brass there is busy implementing the company's sales strategy for the upcoming holiday season.

Dennis Pence, who co-founded the Coldwater Creek in 1984 with his then wife, Ann, and is its chairman, handed the helm on Jan. 1 to Jill Dean. Dean had been president and chief merchandising officer and was promoted following a few quarters of pared losses and one quarter of year-over-year sales increases to close out 2012.

Pence, who came out of retirement in 2009 to help right the ship at Coldwater Creek, will remain chairman of the board through the end of the calendar year.

He implemented a turnaround strategy that has included eliminating underperforming stores, reducing store sizes where appropriate, cutting back on in-store inventory, refreshing the inventory more often, introducing customer loyalty programs, and forgoing jeans and t-shirts that so many other clothing retailers carry.

As the losses began to shrink, some analysts improved their ratings for the company's stock.

Net sales for the second quarter totaled a $149.7 million, a drop of 8.6 percent compared with the year-earlier quarter.

Also in its second-quarter operating results, Coldwater Creek projected its third-quarter net loss will be in the range of 55 to 75 cents a share, compared with a loss of 67 cents a share in the third quarter of fiscal 2012. The company also expects its third-quarter premium store sales will be down in the high single-digit percentages compared with a 7.3 percent increase in sales in the year-earlier quarter.

Stock prices for Coldwater Creek, listed as CWTR on the Nasdaq exchange, peaked in 2005 and 2006 at more than $30 a share. Adjusting for a 1-for-4 reverse stock split on Oct. 4, 2012, that's the equivalent of more than $120 a share. The share price had fallen by mid-2012 to 45 cents a share and was under a $1 a share long enough that the company was in danger of being delisted by Nasdaq. After the split, the stock price climbed in November to $5.72 a share, but has declined steadily since then, closing Monday, Oct. 7, at $1.63 a share.

Last November, GMI Ratings, a corporate governance and accounting research company, reported that Coldwater Creek had a high chance of going bankrupt within a year.

While it appears Coldwater Creek will outlive that prognosis, Seeking Alpha, a stock market analysis website, speculated last month that the "next stop" for Coldwater Creek is bankruptcy.

Noting that the company has lost money every year since 2008, Seeking Alpha's response to Coldwater Creek's second-quarter earnings added that a critical problem is that "the retailer's fashions failed to resonate with customers."

"It's a little premature to be talking the bankruptcy route," she says. "I believe the product has improved tremendously."

While the company targets women 50 years and older, it appears it's also trying to capture customers in the late 30s and 40s, Pierce says.

"I believe it's more of a lifestyle than age," she says of Coldwater Creek's target demographic. "Women at a certain point don't want to look like teenagers; not in-your-face trend-right, but trend-relevant."

Pierce says Coldwater Creek's has a lot of space in which to expand the core of its market sector while maintaining the company's identity.

"They're trying to merge the heritage of from-the-earth naturalness and make it more modern," she says, noting that its recent fashions are "more flexible and can go from day to night and from day to weekend."

Other nationwide apparel companies have come back from the brink of failure, Pierce says.

"I'm not giving up hope," she says of Coldwater Creek.

Women's retailer Ann Inc., which operates Ann Taylor and Lofts stores, is seeing an upward trend in its stock performance since March, according to data published online by Morningstar Inc., a Chicago-based investment research company. Chico's Fas Inc. which targets "fashion savvy women over 30" also is performing well above 2011 levels. Though not a direct competitor with Coldwater Creek, The Gap Inc., another apparel store that has had to reinvent itself, also is up for the year following a big gain in 2012, Morningstar data show.

"We're telling investors there's definite uncertainties," she says. "I think they've made a lot of progress, but in terms of investors putting new money into the stock, it isn't something we would advise."

"We don't have a network of brokers to recommend to," Hart says. "We might buy it, but we want to see the company find some solid ground. It's a cheap stock. If it can survive and level out and show any kind of growth, it would be welcome."

One encouraging number he noted from deep within Coldwater Creek's consolidated statement of cash flows is that the company had a positive operating cash flow of $9.4 million for the second quarter of fiscal 2013, the first such positive cash flow in six quarters, Hart says.

Positive operating cash flow, which is sometimes masked on paper by noncash losses such as depreciation, can help a struggling company buy some time, he says.

"The company needs to put a couple of those quarters together," Hart says.

On the other hand, Pierce says Coldwater Creek has to spend money to address its issues.

For instance, she says, "On the real estate side, they are getting out of some stores that may not be consistent with their forward strategies. That comes at a cost. I've never seen a seamless retail turnaround."

Coldwater Creek's headquarters are located on a four-building campus with 250,000 square feet of floor space at 1 Coldwater Creek Drive, in north Sandpoint.

Coldwater Creek has 6,600 employees companywide, according to Morningstar. The Idaho Statesman daily newspaper in Boise reported earlier this year that the company has 500 employees in the Sandpoint area.