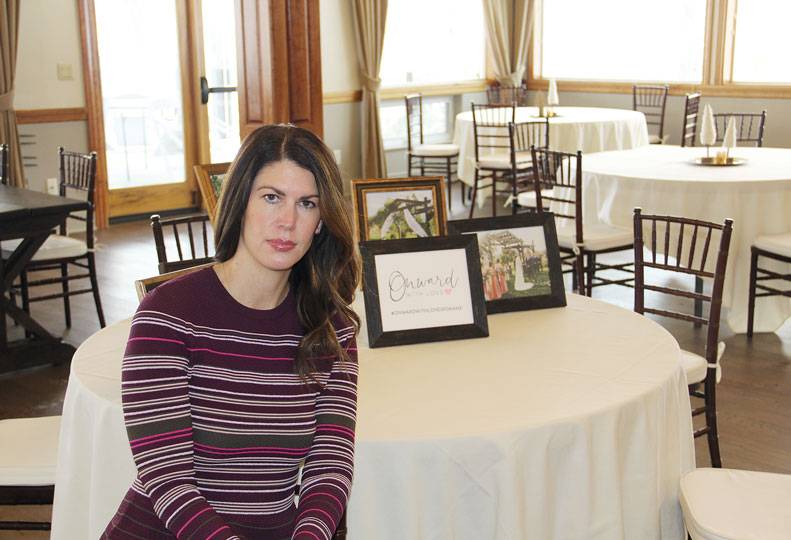 Around the middle of last year, Beacon Hill Catering & Events co-owner Ellie Aaro announced the business was expanding its meal and delivery service, Beacon at Home.

The move was in direct response to Washington Gov. Jay Inslee’s then titled “Safe Start” plan, which closed the majority of all public gathering places to help stem the tide of COVID-19.

“Little did we know that that would be our main source of revenue through the year,” Aaro says of the $45 delivered family meals for four.

Aaro says COVID-19 and the associated gathering restrictions that have come with it resulted in a 70% revenue decline in 2020 from 2019. And a lot of that revenue went across the border to Idaho, a function of that state being further along in reopening its economy than Washington, she says.

Kris McIlvenna, who co-owns and operates Greenbriar Inn just a half-mile north of the Coeur d’ Alene Resort, says she’s seen more Washingtonians patronize her boutique hotel, restaurant, and catering businesses than at any point in the last 35 years she and her husband have been operating them.

“I really feel extremely empathetic to those business owners I know in Washington who are struggling,” McIlvenna says. “It’s tragic to listen to people share stories about losing their entire life’s savings.”

Currently Idaho is – and largely has been – further ahead of Washington in reopening the economy since the first shutdowns enacted by Washington Gov. Jay Inslee and Idaho Gov. Brad Little.

Idaho currently is in Stage 3 of its Idaho Rebounds plan, which allows some large events, such as trade shows, weddings, and sporting events if they commit to follow certain physical distancing and hygiene protocols.

Spokane and eight other counties making up the state’s East Region are in Washington’s Phase 2 of Inslee’s reopening plan, which limits indoor public gatherings to 25% of capacity, and outdoor sports and entertainment gatherings of up to 200 people, while social-distancing protocols remain in place.

Though Phase 2 brings some degree of relief to businesses, Aaro contends that for hospitality and event planners, it’s almost as if they’re having to build many aspects of their businesses from scratch.

Aaro says the move to Phase 2 won’t help Beacon Hill recoup those previously scheduled events for 2021 that were canceled as 2020 was winding to a close.

“We started receiving calls in early August from people to cancel because the bans on gatherings left people in no-man’s-land,” Aaro says.

Located in East Spokane, at 4848 E. Valley Springs Road, Beacon Hill Catering & Events has been working with other caterers, the Spokane chapter of the Washington Hospitality Association, and Greater Spokane Incorporated in crafting the ongoing message to state legislators and Inslee’s office about the hospitality industry’s struggles and its desire to see more of Washington’s economy reopened.

Under Phase 1 in Washington, outdoor ceremonies were limited to 30 people. Indoor receptions, wakes, or similar gatherings in conjunction with such ceremonies were prohibited.

By the time Washington’s East Region was allowed to advance to Phase 2, however, the entire state of Idaho was already in the less restrictive Stage 3 of its reopening plan.

Desiree Seghetti-Sulpizio, vice president of operations at Commellini Estate Venue & Event Restaurant, at 14715 N. Dartford, north of Spokane, says when it comes to a wedding, there’s no such thing as a “pause in activity.”

“A few may have postponed, but in my conversations with couples, they either decided to go to Idaho or hold it in the backyard illegally,” Seghetti-Sulpizio says.

She adds, “There’s a safety piece to this that doesn’t get talked about. An event center is going to have people dedicated to sanitizing and ensuring social distance. I don’t know if that’s going to happen at a private residence.”

In a typical year, Commellini’s hosts 60 weddings. Last year it had fewer than 10, she says.

Commellini’s, which debuted in 1941, has legions of loyal supporters who she says continued to order from the restaurant’s Meal Kits 2 Go and Gourmet Retail Line, which the restaurant began offering not long after the pandemic arrived.

Seghetti-Sulpizio says Commellini’s experienced a 50% decrease in revenue in 2020 from 2019. Food orders kept that decline from being more precipitous.

Across the border, officials at the Coeur d’Alene Resort, North Idaho’s largest hospitality and meeting venue, decline to comment for this story.

Several other event and catering businesses in North Idaho couldn’t be reached by phone by the Journal either.

McIlvenna, who has run Greenbriar with her husband Bob since 1985, says their restaurant can seat 55 people. The initial gathering restrictions imposed by Idaho’s Gov. Little closed the McIlvenna’s businesses from March 17 to June 3, she says.

“It has still been a challenging year for businesses here,” McIlvenna says.

Greenbriar lost three major corporate accounts at the outset of the pandemic.

“It’ll be a long time before corporate clients come back,” she says.

McIlvenna says the company was down 40% in overall revenue in 2020 from the year prior. She says that percentage would’ve been considerably higher without the patronage of Washington residents.

She’s optimistic 2021 will be a bounce-back year.

“We’ve been well-established for a while now and have a strong base of repeat business,” she says. “But unfortunately, that’s not going to be the case for a lot of business owners in hospitality.”