Organization might have to take out loan to finish $8M project 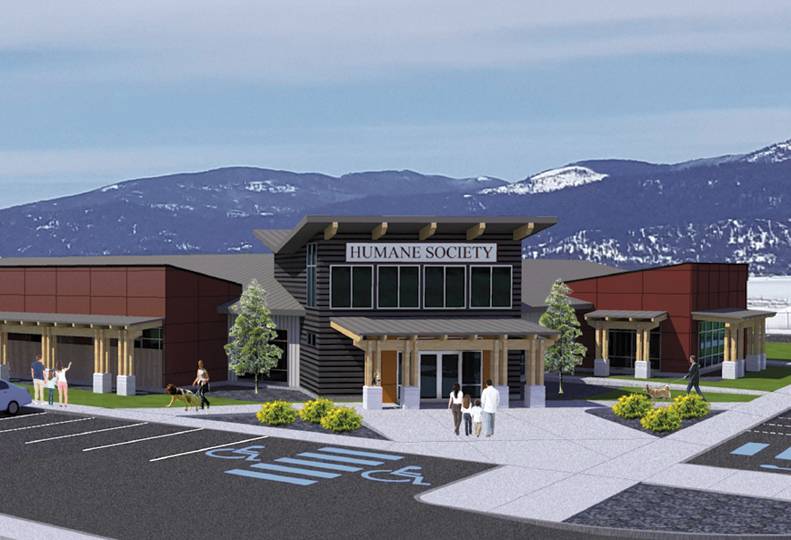 -—Longwell+Trapp Architects
The new, 20,000-square-foot Kootenai Humane Society facility is scheduled to be completed by the end of this year.

Construction began in November at the 10-acre site just west of the Coeur d’Alene Airport, says Vicky Nelson, KHS development director. The facility is expected to be completed by year-end.

Hayden-based Young Construction Group of Idaho Inc. is contractor on the project, and Longwell+Trapp Architects PLLC, also of Hayden, designed it.

KHS currently is located on the eastern edge of Coeur d’Alene Airport property at 11440 N. Ramsey Road. Nelson says KHS must move from there, because the airport is expanding its runway, which she can see from her office window.

In addition, the city of Hayden is improving Ramsey Road and has staked a portion of right of way on the current KHS site, says Nelson.

She adds that the current building is 43 years old and originally was constructed in the style of a traditional dog pound with concrete walls and chains. While Nelson says the animals there get plenty of attention and exercise, people don’t like to see the facility.

“We just want to get these animals into homes, so we want to make the building more user friendly,” she explains.

So far, KHS has raised $5.5 million for the project. Nelson says, however, the organization likely will run out of project funds before summer and may need to take out a bank loan if it doesn’t raise the remaining $2.5 million before then.

The Humane Society is community funded and doesn’t receive any government funding, she says.

KHS began its capital campaign in 2017 and estimated the project cost at $6.5 million in 2018. However, when the project was rebid last year, costs had gone up, Nelson says.