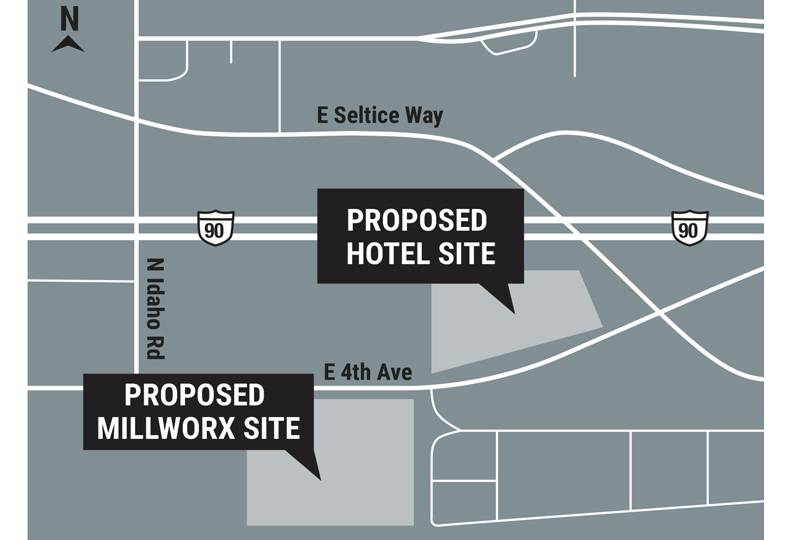 A development of over 120 residential living units is planned on the grounds of the former Idaho Veneer Co. mill site.

The $20.5 million project, named Millworx, is located at 704 E. Fourth and is being developed by longtime Spokane developer A&A Construction & Development Inc., and Wolfe Architectural Group PS, also of Spokane, is designing it, according to city records.

Separately, A&A Construction has submitted a special-use permit request to construct a dual brand hotel at the northwest corner of Fourth Avenue and Seltice Way, which is just north of the Millworx site and just south of Interstate 90.

A representative of A&A Construction couldn’t be reached immediately for comment.

Heidi Varney, permit coordinator for the city of Post Falls, says that there is still a lot of semantics to be ironed out, such as permits issued and site plans approved, but believes construction will most likely begin in the spring.

City records show townhomes will have three main designs: The Garden, the High End, and the Urban.

The Garden layouts include five three-unit buildings and four four-unit buildings with two-bedroom and three-bedroom units. Site plans show the square footage for the larger units at 1,700, while the smaller units will be 1,300 square feet. Each unit also is designed with an attached garage.

The High End layouts will include three four-unit buildings with detached garages, a private yard, and a bonus room above the garage. High End units will be three-bedroom townhomes with 2,400 square feet of living space.

The Urban layouts will include three six-unit buildings with two-bedroom and three-bedroom townhomes and attached garages. These units are smaller in scale ranging from 1,400 square feet to 1,680 square feet.

Records indicate the 61 apartment units will be in two multistory buildings with ground-floor recreational and commercial space along Fourth Avenue. In an overview provided to the Post Falls Urban Renewal Agency, plans show a European-style coffee house and a natural grocer in the commercial space.

The apartments will include studio, one-bedroom, and two-bedroom units.

Regarding the hotel project north of the Millworx site, A&A has submitted a special-use application that asks the city to allow construction of a 60-foot building to accommodate a fifth floor at a location where building height is restricted currently to 45 feet. A public hearing for the request had been for Tuesday evening, Jan. 11, after the Journal’s press time.

City records don’t yet indicate the hotel brands being contemplated for the project or a construction value.

Dual-brand hotel is a term used to describe a single property that combines two hotels under one roof, but which operate separately. According to hospitality industry news website Hospitality Insights, dual-brand properties have separate entrances, front desks, and elevators for each brand, however, the hotels share back-of-the-house operations and guest amenities.

Typically, dual-brand hotels combine two separate brands from the same parent company such as Hampton Inn & Suites with Homewood Suites from Hilton Hotels & Resorts, which cater to both leisure and business travelers.

For these types of hotels to be successful, developers need to be confident that there is enough of a market for the two or more brands; the most common pairing is a full or limited-service hotel with an extended stay hotel, asserts Hospitality Insights.

“The area hotels were bursting at the seams all summer,” Petit says. “North Idaho has been discovered.”

Post Falls tourism promoters, like those in Spokane and Coeur d’Alene, conducted a campaign promoting outdoor spaces where visitors can recreate in nature while observing social-distancing protocols. Post Falls promoted heavily to the Seattle metro area and part of Oregon, says Petit, adding that the trails and accessible rock-climbing park in the Community Forest are big attractions for Post Falls.

“Our unemployment rate is historically low,” she says. “Restaurants, retail shops, and hotels all saw record numbers in 2020 and 2021 and almost all are suffering from a shortage of staff.”