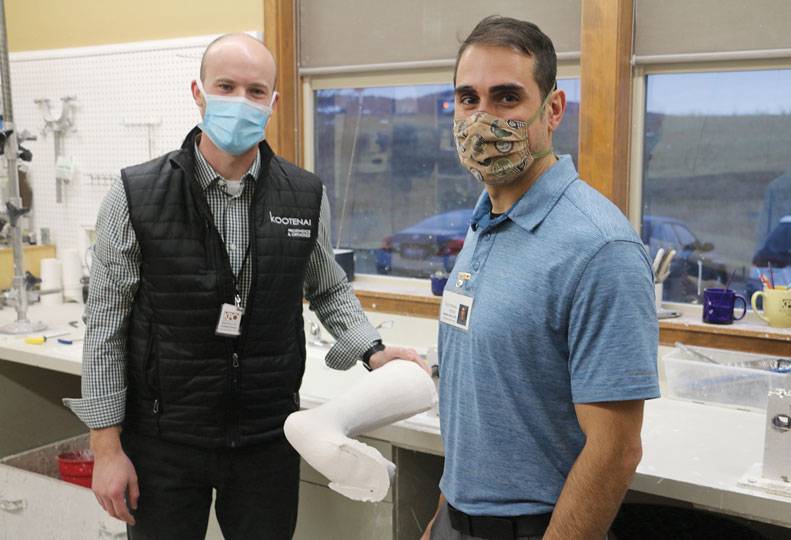 Daley and Blas decline to disclose the terms of the acquisition of the clinic, which occupies a 5,500-square-foot suite at 1160 E. Polston, in Post Falls.

The transaction was completed Jan. 31, says the 32-year-old Daley, who has worked for Miller at the clinic since 2016.

“It’s been a long journey, and it’s been actually a couple of years in the making,” he says.

Daley moved to Spokane from Seattle after Miller offered him a position almost five years ago.

“He eventually approached me about potentially buying,” says Daley, adding that his ultimate desire was to have a business partner in place to assist in daily operations.

Daley graduated from Montana State University with a bachelor’s in kinesiology and has a master’s in orthotics and prosthetics from the University of Washington. In the Seattle area, he worked in private practice and as a research prosthetist for the U.S. Veterans Affairs Center of Excellence for Limb Loss Prevention and Prosthetic Engineering.

Blas, 36, joined KPO in the summer of 2020 after working for the VA Puget Sound and Portland VA health care systems.

Conversations with Miller about buying the business began in earnest about two years ago, he says.

“I trailed Stephen by a year through the (UW) program, so we knew each other pretty well,” he says. “I knew that he was the business partner I’d be looking for.”

Delayed in part due to COVID-19 concerns, the acquisition took longer to complete than initially anticipated, Daley says.

“Once we felt that things had settled down a bit, and we saw that patients were comfortable coming back to the clinic, then we really buckled down and finished the (purchase),” he says.

Like Blas, Miller served in the Navy as a corpsman and holds degrees in kinesiology, orthotics, and prosthetics from UW. Miller acquired KPO in 1998 from the clinic’s original founder, Doug Potter, who launched the business in the early 1980s, Daley says.

KPO is a VA-contracted clinic that has more than 1,500 patients who live in Washington, Idaho, Montana, and British Columbia. When Miller purchased the single-practitioner clinic from Potter, KPO had roughly 200 patients, Daley says.

Between 20% and 25% of the clinic’s patients are retired veterans, Blas says.

Daley says the costs for orthotics and prosthetics vary greatly.

“Everything we provide is billed through insurance,” Daley says. “Within our field, insurance companies determine the prices for components and our services.”

Daley says a physician’s prescription is required for a patient to receive clinic services. Once the patient has been evaluated and an appropriate component and device for the individual has been determined, the clinic often is required to submit a pre-authorization to the patient’s insurer, he says.

“Our team works extremely hard advocating for the patient to ensure their device is covered by insurance,” Daley says.

Today, KPO employs a staff of nine that includes Daley and Blas, a prosthetic resident, a pair of lab technicians and four support staff, Daley says.

Miller designed the clinic with the intention of dedicating the 5,500-square-foot suite to an on-site fabrication laboratory, where 95% of all orthotics and prosthetics products for clinic’s patients are designed and built, Daley says.

Blas called the making of orthotics and prosthetics a combination of “shop (class) and in-patient care.”

Daley says he’s always had an affinity for exercise and physiology.

“I actually stumbled across prosthetics and orthotics in my junior year of college,” he says. “I was able to shadow and intern in a local clinic, and that’s what really got me plugged in.”

Despite the fact the overall amputee population is “quite small,” Daley says, KPO has developed a strong word-of-mouth following through the years that has enabled the business to grow while continuing to serve long-time patients.

Over time, as parts wear out, and patients’ bodies change, it becomes necessary to construct new orthotics and prosthetics for them, Daley says.

As new carbon-fiber technologies continue to emerge in the field, KPO has incorporated the use of computer-aided machining technology to capture highly accurate three-dimensional shapes of joints and limbs of their patients, Daley says.

“It’s constantly scanning any deformation of a limb to a very high accuracy,” he says.

The information is then stored in a computer, which allows KPO to create an orthotic or prosthetic very specific to the joint or limb to which it will be attached or placed, Daley says.

“With this technology, it improves accuracy and outcomes and offers a decrease in the overall fitting time frame,” he says. “We can offer a quick turnaround. However, we don’t want to rush the process.”

“It came down to being able to run a private practice with a moral compass,” says Blas of his decision to become a co-owner in the business and to relocate his wife and children to North Idaho from metro Seattle.

“Money is important in running a business,” Blas says. “But that’s secondary to what we truly love, why we went to school, and why we’re in this field.”