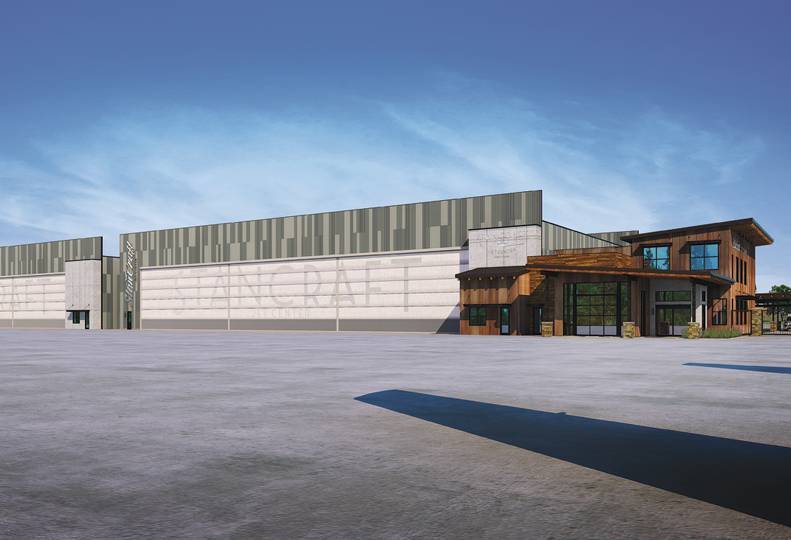 “It’s a good dovetail for us,” StanCraft President and co-owner Robb Bloem says. “The majority of our clients fly private. For the last three or so years, we’ve had a lot of interest in us redoing their interiors of their jets.”

Bloem says StanCraft decided to move ahead with establishing the company as a fixed-base operator. In that process, Bloem says, the company acquired Hayden-based Southfield Aviation on May 1.

“(Owners) Liz and Larry Booher were looking to retire,” Bloem says. “The timing was correct. We made contact with them and worked out a deal where we purchased them. They’re staying on board through the summer.”

Bloem says Southfield had three employees when StanCraft bought the company; now, it has eight, and that number is expected to grow with the jet center. Bloem says StanCraft Jet Center ultimately will employ about 40 people.

Bloem says the Booher’s daughter, Jolene Compton, is now general manager of the jet center, which currently operates under the StanCraft Jet Center name at the Southfield Aviation facility.

“We’re operational on the field as StanCraft Jet Center, so we’re getting some practice … before we open up the big (facility) here,” Bloem says.

The 40,000-square-foot Southfield Aviation building will be used as a maintenance facility after the new jet center is built, Bloem says.

He says construction on the new 85,000-square-foot FBO is to begin in August east of Empire Aerospace, and the project is expected to be completed by May 2020. Coeur d’Alene-based Eric Hedlund Design is the architecture firm that designed the structure, and Hayden-based Young Construction Group of Idaho Inc. is the contractor.

“We’ve secured the leases with the county for about 12 to 14 acres on the north side (of the airport), including the north ramp,” Bloem says.

“We’ll have two 30,000-square-foot hangars, both of which will be big enough to fit a (Gulfstream) G650, which will be as large a plane as you can fit in a hangar on this field; right now we can’t get anything that big inside,” Bloem says.

The FBO could be expanded by an additional 40,000 feet, Bloem says, if the Panhandle Area Council can secure funding for a third hangar.

The Panhandle Area Council is headquartered just east of the airport. The organization didn’t immediately respond to a request for comment.

StanCraft Boat Co., which is an assumed name for Juliette Corp., is located just south of the airport, at 2936 W. Dakota.

The maker of hand-built wooden boats was established in 1933 in Lakeside, Montana, before moving to Post Falls in the 1980s. In 2016, StanCraft moved into its current 30,000-square-foot headquarters and production facility in Hayden.

“The economy is good right now, so we’re making hay while the sun is shining,” Bloem says.