Credit union here has two other projects under way, planned in Spokane area 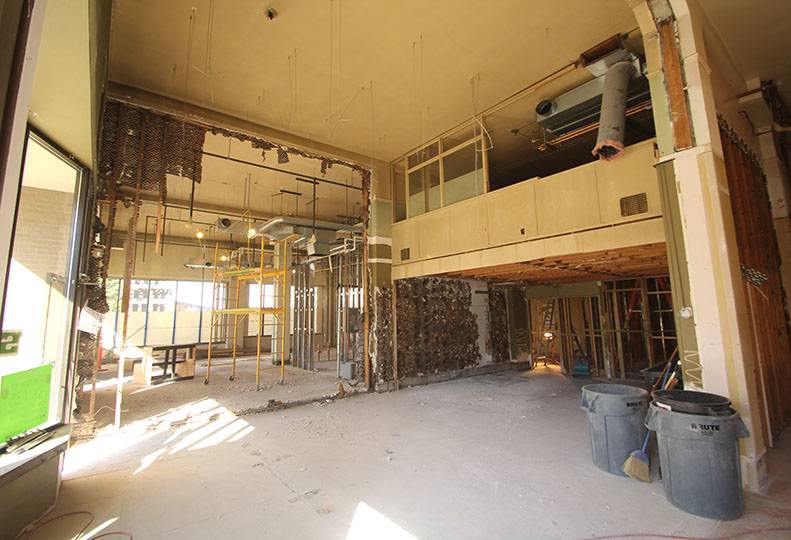 -—Staff photo by Mike McLean
Demolition work has started on a main-floor space in the Hutton Building downtown. An STCU branch is scheduled to open in that space early next year.

Spokane Teachers Credit Union, of Liberty Lake, says it will begin construction within the next 18 months on a branch at The CrossRoads Coeur d'Alene retail center, which will have a WinCo Foods outlet as the anchor store.

In the retail complex, STCU plans to erect a stand-alone, 3,500-square-foot branch at the northeast corner of Ramsey Road and west Appleway Avenue. The outlet will be STCU's fourth in Idaho and its 18th or 19th branch overall, depending on when a planned Spokane Valley branch is built, says STCU spokesman Dan Hansen.

The envisioned Coeur d'Alene branch is one of three construction projects the credit union has either in planning or under construction.

Hughes Investments, of Newport, Calif., is developing The CrossRoads Coeur d'Alene retail center, which is expected to open in March on 16.5 acres of land where a sand and gravel pit previously operated.

Scott Adkins, STCU vice president of lending, says the credit union will select its own architectural firm and contractor for the branch, which is expected to employ eight to 10 people. He says STCU won't have a project cost estimate until after a design is complete.

The architect likely will be selected in the next six months, Adkins says.

Adkins says STCU expects growth in the next few years in Idaho, where it serves members in Kootenai and Bonner counties. In May, the credit union expanded its charter service territory in Idaho to include Benewah, Boundary, Latah, and Shoshone counties, Hansen says.

STCU currently has two branches in Kootenai County, one in Post Falls and one in Dalton Gardens, and one in Bonner County, in Ponderay.

Adkins adds that STCU views North Idaho as a good growth area for the credit union.

"We're bolstering our presence in Kootenai County, and we're looking at other areas of North Idaho that match those growth patterns," he says. "We don't have any immediate plans for (other) new branches in North Idaho, but we do consider it an attractive market for STCU."

Last fall, STCU announced plans to build a Spokane Valley financial center to include the full-service branch there, which is expected to open in the next two years. STCU's tentative plans call for a two-story, 20,000-square-foot structure at the northeast corner of Mission Avenue and Mullan Road. Hansen says STCU also won't have a cost estimate for that project until after the design is done.

Meanwhile, in downtown Spokane, the credit union is remodeling 2,300 square feet of space on the main floor of the Hutton Building, at 9 S. Washington, for a new branch. The branch will occupy the northwest corner of the floor and is expected to open early next year as the credit union's 17th branch overall. Wells & Co., a Spokane real estate development company, is the general contractor.

For STCU's project in downtown Spokane, Wells & Co. also has started some renovation work for STCU on other floors and common areas of the seven-story Hutton Building. By next spring, STCU plans to move its commercial lending operations to the sixth floor of the structure from Schade Towers, at 528 E. Spokane Falls Blvd., although it will keep a retail branch in the Schade building.

Hansen says STCU estimates a $3.5 million cost for the Hutton Building work, which includes deferred maintenance, renovation for the branch and sixth-floor spaces, furnishings, and other work throughout the building such as upgrades to flooring, elevators, lighting, heating, and signage.

In an April 25 Journal story, STCU CEO Tom Johnson said the credit union initially expects to have between 20 and 25 employees downtown, with most of them in the commercial lending operations and between three and five in the branch.

"We still plan to develop office condominiums through Wells," Adkins says. "That work is part of our overall redevelopment of the building."

He adds, "The sixth floor should follow shortly after the branch, so commercial lending will move sometime first quarter, and following that, we'll be in position to pursue sales of office condominiums."

Ron Wells, a principal at Wells & Co., says the marketing of the business condominiums will occur after upgrades to STCU's areas and to common building spaces, "then we'll have pricing on upper floors."