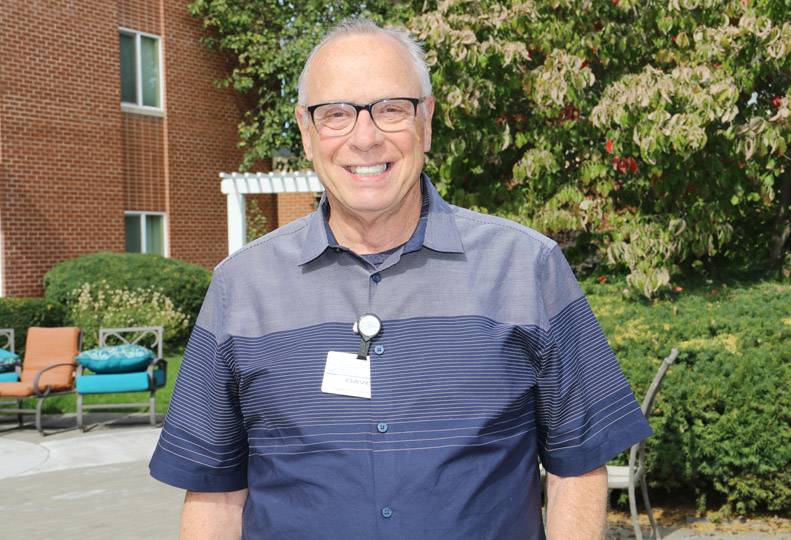 -—Samantha Peone
David Lobdell, of Good Samaritan Society-Spokane Valley, says he has hired a handful of nurses, but still has open positions.

With higher wages in other specialties, a growing workforce void, and an increasingly large retiring population, among other factors, the retirement industry has seen a serious nursing and aid shortage, some industry professionals here say.

Lobdell says the community can still find nurses, but it’s taking longer to find applicants; what was once a few weeks of searching for a nurse had turned into a couple months.

Good Samaritan Society recently rolled out new hire incentives and bonuses, which helped fill open positions, he says. Because the nonprofit is faith-based, that likely helps fill positions too, he contends.

The nonprofit also is looking at bringing nurses from the Philippines to help alleviate the burden as well, he says.

Wages vary depending on certifications and experience, says Lobdell. A registered nurse’s monthly pay at Good Samaritan Society ranges between $2,838 and $3,371.

Lobdell says part of the reason for the retirement industry-specific shortage is wages.

“Nursing homes are never going to compete with hospitals as far as wages and benefits,” he says.

Also, elderly care isn’t as attractive as other subfields, he says, and many see themselves entering into other specialty areas, such as emergency medicine, acute care, or pediatrics instead of elderly care.

Lauri St. Ours, director of government and legislative relations for the Tumwater, Wash.-based Washington Health Care Association, says a task force has been looking into the need for nurses and assistants in long-term care settings and plans to present its findings and recommendations to the state Legislature in December.

St. Ours says the shortage is a “crisis” that reaches beyond just nurses—certified nursing assistants, direct care staff, in-home care providers, and other health aid positions are being affected.

About 60 percent of people living in skilled nursing facilities depend on Medicaid, she says.

“The average cost of caring for a Medicaid resident in a nursing home exceeds the Medicaid reimbursement rate by more than $30 a day,” says St. Ours. “For a 100-bed nursing facility with an average Medicaid population of 60 percent, this shortfall represents a $657,000 annual funding gap,” which affects the industry’s hiring and retention.

About 20 percent of people in assisted living depend on Medicaid, and assisted-living communities struggle to offer competitive wages while also being affordable for residents, she says.

Other reasons for the staffing shortage include the state’s struggles with keeping up with background check, certification, and licensing demands, St. Ours asserts.

St. Ours recommends that the state provide CNA and home care aid candidates greater access to testing sites across the state.

She says people who are hired and complete the 75 hours of training in their first 120 days should still be allowed to work at that point. Once they take and pass the test, they should be allowed to continue working until their permanent credentials are mailed to them, she contends.

“Washington state regulations have not made it easy to get aids because of the additional training they didn’t used to have to have that they do now,” asserts Davidson.

Some temporary-help agencies have had trouble filling those positions as well, he asserts.

St. Ours says education facilities aren’t keeping up with the need for more nurses, another factor contributing to the staffing shortage.

“Since 2013, college nurse credentials have decreased by 21 percent,” she asserts; likewise, LPN certifications dropped 61 percent between 2013 and 2017.

Kaye Slater, lecturer with the Gonzaga University School of Nursing and Human Physiology, says nursing schools “turn away a high percentage of qualified candidates because we don’t have the capacity to accept them.”

Nursing schools don’t have enough faculty, classroom space, or sites to put students for clinical placements, says Slater, who adds that her opinions are her own and not those of Gonzaga University.

Regardless, Gonzaga University has partnered with a number of retirement centers in the Spokane area throughout the years, including Riverview Retirement Community, Good Samaritan Society, Maplewood Gardens, and Providence Emily Court Assisted Living, says Slater. Nursing students are and have been required to spend time in retirement industry facilities, where they learn skills such as properly administering medication and how to groom and bathe residents.

Having clinical practice in those retirement complexes also enables students to experience working in that setting, and they will sometimes “seek employment in those facilities, either while in school or after graduating,” says Slater.

The aging of both the nursing workforce and the overall population is compounding the health worker shortage.

Slater says, “We’re seeing a twofold impact here of people leaving the workforce but also needing the care and services they were just providing themselves.”