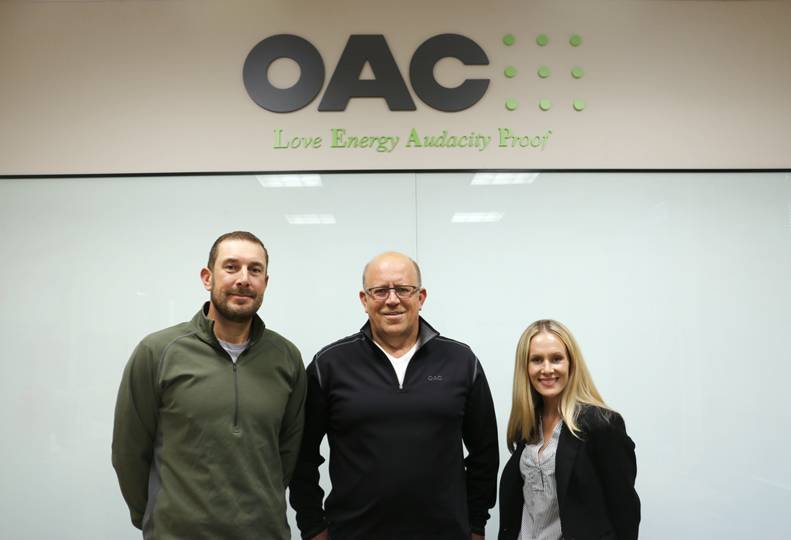 That hasn’t changed, Jurgensen says. He claims the relationship-first attitude has helped OAC’s Spokane office, located on the fifth floor of the Great Western Building, 905 W. Riverside, to grow ever since.

“We look at it as a long-term investment, a long-term commitment to working with that customer for as long as they have business,” Jurgensen says. “The one-and-done mentality just doesn’t exist for OAC. We don’t just go out, take a random contract, try to win it, make as much money as we can, and then on to the next one.”

Fostering those relationships has led to 80% of OAC Spokane’s business coming from repeat clients and referrals, he claims.

OAC was founded in Seattle in 1955 as an employee-owned company called Tracey and Brunstrom Corp.; it later merged with Olympic Engineering Corp. to form the Olympic Associates Co. Today, more than 150 employees work at seven offices in the western U.S., from San Diego to Everett, Washington, including its Seattle headquarters and its Spokane office.

When Jurgensen joined OAC, he was its only Spokane employee — for a while, he worked from his kitchen before moving into a small office in northwest Spokane. He hired an intern, who has since become a senior project manager with the company. OAC’s Spokane office now has 10 employees, and Jurgensen says he’s constantly looking for employees who will fit the company’s culture.

Most people might not understand how love fits into a business, but Jurgensen claims that OAC believes it works for the best interests of employees — when the recession hit, OAC found ways to keep the Spokane office open rather than leave employees jobless, Jurgensen says, adding that it was also in the best interest of clients here for the company to maintain its Spokane presence. Applying the LEAP model, OAC aims to keep any momentum it gains, encourages employees to speak freely, and delivers on its promises, he asserts.

Jurgensen says OAC’s Spokane office originally focused on education projects and continues to concentrate heavily on that area while expanding to other sectors, including municipal, health care, and private-sector projects.

OAC has been involved with all of Central Valley School District’s recent projects, Jurgensen says, and has handled jobs for Cheney, Nine Mile Falls, and Mead school districts.

Most recently, OAC was selected as construction project manager for the West Plains-Airport Area Public Development Authority. Jurgensen says OAC has not yet signed a contract, and he’s not sure what OAC would be working on for the PDA. However, he hopes that Mullen Technologies’ new assembly and research facility will be one of those projects.

Jurgensen says OAC has begun to do more design-build work, which is one of several ways to deliver a project.

“Typically, construction gets done in siloes; you design it, then you build it,” he says. “(In design-build), the designer and the contractor are on one team contracted to the owner, and then we’re a construction manager on that. It’s a lot faster for delivery.”

Design-build isn’t a new concept in the industry, Jorgensen says, but it’s new to many OAC clients.

“In some of the industries we work in, like education, it’s been slow to be adopted in the state of Washington,” Jurgensen says. “They want to make sure everyone’s being fair on how they are awarding work, so that people aren’t losing work just because of some arbitrary reason.”

While OAC provides construction and project management services for design-build projects, the company also advises clients on which delivery method will work best for their project.

Senior project manager Damon Gardella says, “There are (codes), regulations, and requirements set by the state that the owners are required to follow, and we guide them through that red tape and make sure they’re following the laws.”

The design-build method can work well in rural areas like the far-flung Eastern Washington communities of Republic and Tonasket, Jurgensen says. Finding designers and contractors who are willing to travel outside of the Spokane area is difficult and often expensive, Jurgensen says.

“When you have a contractor and an architect on one team, they understand that community,” Jurgensen says. “They understand where it’s at, the logistics of getting people and products up there, all the costs involved in everything, so that you’re theoretically saving time and money because you’re getting it right the first time.”

Companywide, OAC has been involved in 25 design-build projects, Jurgensen says.

OAC also offers procurement services, which involves working with manufacturers and clients to identify the right furniture, fixtures, and equipment for a building.

“It just takes another thing off of their plate so they can concentrate on what they’re supposed to do,” Jurgensen says. “We don’t necessarily have to take it over, but we help and guide them.”

OAC initially offered the service to Central Valley School District after the district asked for help finding furniture and fixtures. The Spokane office currently is working toward certification in procurement and purchasing, Jurgensen says.

OAC marketing director Jennifer Pascoe says Spokane was the first of the company’s offices to provide the procurement service.