Startup lands funding while honing model, with sights set on scaling up 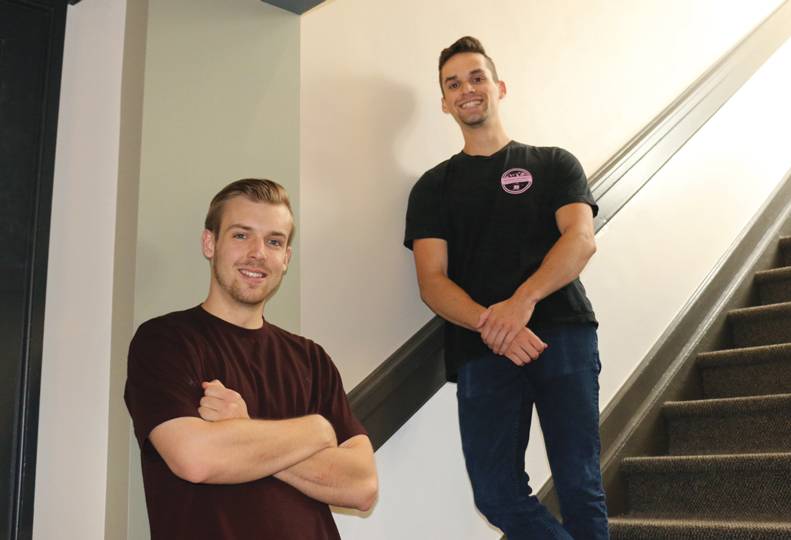 Having seen some of the financial challenges college students face, two recent Gonzaga University graduates have built a business that helps collegians generate income by taking on mundane tasks that homeowners don’t want to mess with themselves.

Now, the simple concept behind OddJobbers Inc. has placed the young company on a short list of non-tech startups in the Inland Northwest to catch the attention of venture capitalists.

Jobs such as weeding, leaf raking, garage organizing, and moving are among the most common residents and business owners seek to fill through OddJobbers Inc., says CEO and cofounder Nick McLain.

Since its founding in March 2018, nearly 2,000 students have completed at least one odd job, and more than 1,200 businesses and homeowners have enlisted its help. The website hosts an average of 20 to 30 jobs a day. Roughly 800 students have signed up for an OddJobbers account in the last year, he says.

Over the past year, the startup has received support from many in Spokane’s startup community who believe OddJobbers has developed a viable business model.

McLain says at least one ardent investor believes over time the service will be made available to the general public in search of work.

In the first quarter of 2020, OddJobbers raised $310,000, which included contributions from local entrepreneur Tom Simpson’s Kick-Start fund, the Morning Star Foundation, and several other area angel investors, according to the 23-year-old McLain.

OddJobbers closed on $50,000 in funding from Spokane-based Mind to Market LLC. in the first quarter of 2019, he says.

During that time, the company’s board of directors grew to include Simpson, Morning Star Foundation’s board treasurer and finance committee member David Shriner, and former Spokane Mayor David Condon.

“I had heard about these guys in the past and could really see the value they were creating,” says Condon, who hired a student through the service to help organize his garage. “I was impressed with the local college student I was matched with, and that’s really what convinced me to get involved.”

McLain and Kelsey Burns, who also was a Gonzaga student, founded OddJobbers, but McLain bought Burns' interest in the new venture when it was less than a year old.   Zach Duffy joined the company when it was about six months old and now works as its chief marketing officer. McLain and Duffy are the company’s only two full-time employees, though OddJobbers has four part-time engineers who are rebuilding the company’s website.

Duffy, 22 years old and McLain’s longtime friend, is originally from San Francisco and also graduated from Gonzaga with a business degree.

The company’s office is in a 600-square-foot suite on the fifth floor of the Hutton Building, at 9 S. Washington, in downtown Spokane.

OddJobbers’ premise is simple. If you have temporary work that needs to be done in or around your home or business, you can post such work at OddJobbers.com. After setting up their accounts, registered students can respond accordingly to the job listings that fit their interest and schedule.

As an added security measure, starting Sept. 1, the company will require account holders to submit and pass an online background check, McLain says.

One former Eastern Washington University student had a job for five months last year as he was hired to play cards three to four times per week with a 94-year-old woman.

As the company continues to grow, the recently raised funds are being used to overhaul the company’s website to handle increased online traffic, McLain says.

The goal is to make OddJobbers a national company.

Students have the ability to set their own hourly rate for work. That, however, will soon change as the owners want to standardize pay rates in a model similar to that of Uber Technologies Inc., McLain says.

Spokane students will earn $15 to $17 per hour depending on the category of work.

“To be profitable, we would have to be earning a much, much higher margin than we currently are, but doing so would likely force our customers to either not hire anyone at all or go to Craigslist,” McLain says.

He adds, “Profitability for a company like OddJobbers is more contingent on scale and efficiency of marketing.”

While McLain declines to disclose revenue, he says it doubled in 2019 compared with 2018 revenue.

“That needs to be 50% to 100% moving forward,” McLain says. “But we’re still only in the Spokane market and are continuing to work on perfecting our model.”

OddJobbers was closed for half of March and all of April due to statewide stay-at-home orders to stem the spread of COVID-19. The company reopened at the beginning of May, McLain says.

“Demand was definitely there, but it took a little time to get the engines going,” he says.

June was a strong month for the company, and right now, its biggest focus is the development of a new software system for the company’s website. McLain is hoping for a launch in late August to early September.

OddJobbers was born out of their own experience of having to generate income while still in college.

Before his junior year at Gonzaga University, while home for the summer with his family in his native Colorado, McLain saw his brother list himself available to work on the website Nextdoor.com, a website built to keep those in neighborhoods in touch with each other.

“He basically said he’d do whatever around your house you needed,” McLain says.

He saw his brother secure a steady stream of work all summer through the neighborhood website. Meanwhile, McLain’s summer job provided him with a lengthy commute in and around the metro-Denver area.

“He’s driving to jobs five minutes from home and setting his own schedule making the same amount of money as I did,” McLain says.

After returning to the GU campus, while taking an entrepreneurship class from professor Todd Finkle, and then another taught by Simpson the following semester, the idea of starting a company became more solidified.

Duffy underscores that the online job offerings are intended for community college, undergraduate, and graduate-level students.

“If you’ve graduated and haven’t found full-time work, we’ll let you continue to find work for up to a