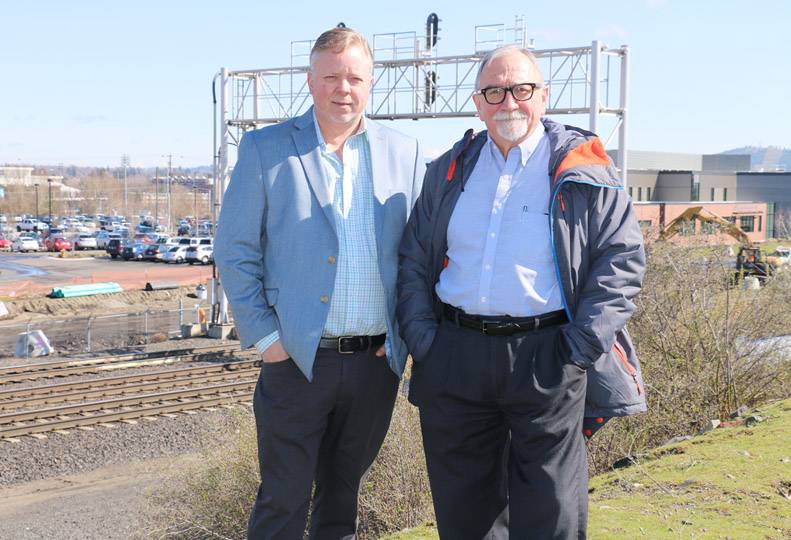 One proposed ballot initiative that would put restrictions on oil and coal shipments via railroad through Spokane for public safety reasons is in the signature-gathering process, while another that sought to ban such shipments outright by codifying people’s right to a healthy climate has been withdrawn.

Sponsors of the active initiative, dubbed Safer Spokane, say they’re confident they can gather the 2,585 valid signatures needed by the June 20 deadline to put the initiative on the Nov. 7 city ballot.

The separate Healthy Climate initiative, which was sponsored by Spokane physician Dr. Gunnar Holmquist, was withdrawn due to differences in verbiage between the initial petition reviewed by the city clerk’s office and the petitions being circulated publicly.

Meantime, Spokane hearing examiner Brian McGinn has determined that both initiatives are pre-empted by federal law.

In the Safer Spokane initiative, McGinn has determined that the federal Surface Transportation Board “has exclusive authority to regulate transportation by rail. The proposed restrictions in the transport of oil and coal by rail encroach upon federal authority and are there for outside the scope of the initiative power.”

The hearing examiner’s findings are nonbinding.

City Council President Ben Stuckart says the Council doesn’t have authority to bar an initiative from the ballot based on the hearing examiner’s findings.

“We send it to the hearing examiner to do a legal analysis,” Stuckart says. “We send the analysis to the sponsor, and they can take the advice or ignore it. We don’t have the ability to not allow someone to go collect signatures.”

Stuckart says the Council added the hearing examiner step to the initiative process because sponsors of prior initiatives that were stricken down in court complained they weren’t forewarned that the initiatives wouldn’t pass legal muster.

“Now, nobody can cry foul and say we didn’t tell them it was illegal,” Stuckart says. “If the initiative passes, and somebody challenges it, it would be up to the city to decide whether to defend it, or somebody could step in and say, ‘I will defend it.’”

Beggs says the hearing examiner review is meant for initiatives that are written by people who don’t have lawyers.

“The hearing examiner gives opinions but doesn’t hear from parties,” he says.

Beggs is an attorney who was involved in national oil pipeline safety reform in connection with the death of three children in the June 10, 1999, Olympic Pipeline explosion near Bellingham.

He says he probably has more experience dealing with oil transportation issues than the hearing examiner.

“I’ve been involved in what localities can do and not do legally regarding the transport of oil,” he says.

Like the hearing examiner, BNSF Railway Co. also sees the initiative as illegal and unenforceable, says Courtney Wallace, a Portland-based spokeswoman for the railroad.

Wallace says railroads are federally regulated, and local initiatives that seek to regulate them violate the Constitution’s commerce clause.

“We are obligated by federal law to move commodities,” she says.

Wallace contends rail transport is the safest and most environmentally efficient way to move anything on land.

“Oil train transportation through Spokane has been fairly consistent,” she says. “There hasn’t been a dramatic increase.”

Jim Lee, a retired Spokane businessman and one of the sponsors of the Safer Spokane initiative, says, “One point of the initiative is to require oil companies to reduce flammability of Bakken crude oil before it reaches Spokane.”

“We’re specifically asking them to reduce volatility through a process called conditioning,” he says. “That should reduce the chance of a spill turning into a fire or explosion by close to 90 percent,”.

He says refineries extract natural gas components from crude as one of the initial steps of the refining process.

“It’s very low tech,” he says. “We feel it should be done before it’s shipped by rail.”

Another element of the initiative would require coal shippers to cover coal cars.

“The main thrust of that is coal dust is slippery and increases the risk of derailment,” Lee says.

Initiative co-sponsor Todd Eklof, a minister with the Unitarian Universalist Church, in Spokane, says that if the initiative is successful, it will have far-reaching effects.

“It won’t just protect Spokane,” Eklof says. “It will protect communities all down the line.”

“A better way is simply through interacting with Union Pacific and BNSF and building relationships between our community and them to make sure the tracks are safe and well maintained,” Cathcart says.

If the initiative passes, it won’t be enforceable, he claims, but the community will have to pay for litigation.

Cathcart says the top priority for the community should be to grow and create jobs to make Spokane an attractive place for businesses of all sizes to flourish.

“When we’re piddling around with issues that don’t have that priority, we’re losing to someone else who’s getting those jobs,” he says.

Lee contends a provision of the National Railway Safety Act enables local and state governments to apply regulations where unique local conditions aren’t addressed by the Surface Transportation Board.

“We maintain our unique local situation is elevated rails passing through a dense urban area,” he says.

He contends such precedent was set by a 9th U.S. Circuit Court of Appeals decision that upheld a case in California in which the state enacted regulations regarding a dangerous downhill curve over a river.

Lee also asserts, however, that the initiative doesn’t intend to regulate railroads directly.