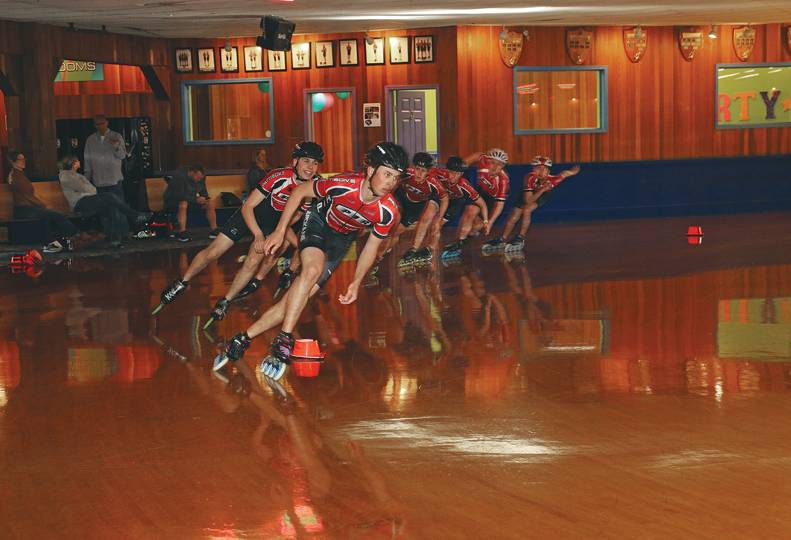 -LeAnn Bjerken
A competitive roller blading team trains at Pattison’s North for a national event that will be held in Spokane this summer.

This year already has been a big one for sporting events here in Spokane, and it’s about to get bigger, says Eric Sawyer, CEO and president of the Spokane Sports Commission.

He says there are 55 events scheduled for this year including; the Washington Middle School Basketball Championship, the Pacific Northwest Volleyball qualifier, the  USA Gymnastics Junior Olympic Level 9 Western Championships, and the National Roller Sports Championship.

“Last year was a big year for us, and we’re excited that this year is looking even better,” he says. “So far, we have 55 events scheduled with about 45,000 visiting athletes expected. That translates to about $64 million in direct spending by visitors attending those events.”

“It depends on the event and the age groups involved, as well as the hotel and number of rooms they’ve chosen, but most of our formulas estimate spending habits of visitors averages between $200 to $300 a night,” he says.

“Youth sports in particular are growing right now, with more kids choosing to participate in club sports rather than school-based sports because they allow for year-round play rather than seasonal,” says Sawyer. “Many of these larger events are through club-based sports networks, because clubs are able to do more travel. A big part of what the commission does is identify those travel sports networks and bring them into the market, because not only do they bring in athletes, they bring in families, which equals more spending potential.”

Sawyer says the Washington Middle School Basketball championship, which took place March 15 and 16 at the Spokane Convention Center and school gyms around Spokane, likely saw a total of 6,750 visitors, with 4,500 hotel stays, generating a total of $6.5 million in economic impact.

“We don’t yet have the exact figures back yet, but I can say the middle school state basketball championships is an annual event that has literally exploded,” he says. “It’s grown to almost 500 teams, and this year we actually had to turn teams away.”

Bill Reinking is the executive director for the Washington Middle School Basketball Championships and helps to manage middle school basketball tournaments around the U.S., many of which are among the largest in their respective states.

Reinking confirms the annual event has grown significantly each year since its start in 2013.

“This event includes boys’ and girls’ teams ranging from fourth through eighth grade. Our first year, we had about 120 teams, and this year, we had about 465 teams,” he says. “With kids and families, I’d say we had over 15,000 people in attendance, the majority of whom come in from out of town, so they filled a lot of hotel rooms.”

Reinking says this year’s tournament included 45 courts at 14 different greater Spokane locations, on which 955 games were played.  The largest venue was the Spokane Convention Center, which housed 12 courts on its own.

“The day after a tournament ends, we’re already planning for next year’s event, with things like determining dates, securing facilities and venues, and marketing,” he says.

Reinking says the event’s continuing growth can be attributed to several factors, the main one being that the championship provides geographic diversity in competition.

“We try to ensure the teams are facing competitors from outside their area, so these are teams they haven’t faced during the regular season,” he says. “The event is also a chance for coaches, players, and families to have a season-ending bonding experience before the kids move on to other sports.”

USA Volleyball’s Pacific Northwest Volleyball qualifier, which started March 22, is even bigger. Sawyer says the event, which brings together teams of girls ages 9 to 18 from all over the country for two weekends of competition, has become one of the largest sporting events the commission hosts annually in terms of hotel stays and economic impact.

“There are eight qualifiers that take place around the country, and teams can attend any of those events they’d like in order to qualify for nationals,” he says. “We’re the only qualifier in the Pacific Northwest, so this event has grown to become something pretty special. We expect it’ll continue to grow once we have more space for it.”

Russ Poage is executive director for the Pacific Northwest Qualifier, which operates through a nonprofit he started with the same name. He says this year’s matches are taking place at the Spokane Convention Center, Eastern Washington University’s Cheney campus, and HUB Sports Center in Liberty Lake.

“This was our 24th year hosting this event in Spokane,” says Poage. “Compared to a lot of other events, it often flies under the radar because it occurs during March Madness when most media are focused on covering Gonzaga basketball.”

Prior to its start, Poage said the volleyball tournament is expected to host about 700 teams with about 10,000 athletes, while attracting close to 15,000 spectators this year.

“Those are similar numbers to what we’ve seen in previous years,” he says. “We could do more if we had the court space, which is why we’re looking forward to the addition of the Sportsplex here in town. Once that’s completed, it would add 16 more courts, which equals out to another 200 teams.”

Poage agrees the event is considered one of the largest hosted in Spokane, third only to Hoopfest and Bloomsday in the number of people who participate.

“These three events are known as the trifecta,” he says. “Hoopfest and Bloomsday get more local participation, whereas we have more folks come in from out of town. There are 10 of these qualifiers in the U.S. and ours is one of the smaller ones, but many people attend because it’s known to be a quality event.”

Looking ahead to May, Sawyer says the Sports Commission will once again team up with Spokane Gymnastics to host the USA Gymnastics Junior Olympic Level 9 Western Championships.

Sawyer says the event is expected to attract about 1,200 visitors, in addition to the athletes, and is estimated to provide an economic impact of $1.9 million.

Nadine Burgess, owner of Spokane Gymnastics, is the director of the meet, which she says will include between 450 and 500 athletes competing over the course of three days.

“We divide responsibilities to make sure that this is a wonderful experience for the athletes, their family, friends, and fans, plus the visiting officials and coaches,” she says. “It’s an incredible opportunity to be able to bring high-level gymnastics to our community for the entertainment value and economic impact.”

Burgess says the 2019 Level 9 Western Championships is the culminating competition for athletes at this level.

“The gymnasts competing having proven themselves as the best in the nation,” she says. “It’s likely that one or more of the athletes competing at this event will eventually become Olympians, probably in 2024.”

Burgess claims the fact that Spokane was chosen to host the event a second time is a testament to how well the city represented itself four years ago.

“The people in our region are sports-friendly, and the 2015 event left a positive impression with everyone connected to it,” she says.

This summer, Spokane will host another major national event, the National Roller Sports Championship. The event, which is scheduled over four weeks in July and August, is expected to bring in 3,000 athletes and 5,400 visitors, generating an economic impact of $11 million.

Shaun Pattison, owner of Pattison’s North, a roller rink at 11309 North Mayfair Road, says this will be the 17th year in which he’s had a team compete in the event.

Pattison says most teams competing at the national championships include about 20 people. His team this year includes 25, with the youngest member being 9 years old and the oldest being 50.

“Our team has placed within the top 10 finalists at this event for the past six years in a row,” he says. “For us the season starts in October and runs through July, with August and September being our off months.”

Pattison says it means a lot to his team that the prestigious event is being held in Spokane this year.

“I’ve been in this sport since I was 3 years old, and it’s like a dream come true to have Spokane host this event, because it’s basically our Olympics.”

Going forward, Sawyer says the Sports Commission is eagerly anticipating the completion of the new $42 million Sportsplex planned near downtown, which is in the design phase now and could begin construction as soon as next month.

“We look forward to when we’re able to open the Sportsplex, because it will give us the space we need to host more of these events,” Sawyer says.