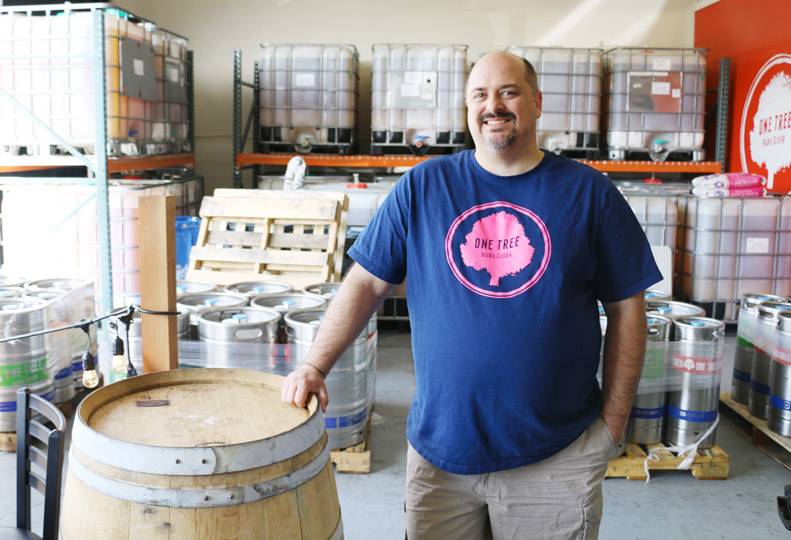 Now in its third year of operation, Spokane Valley-based One Tree Hard Cider LLC plans to keep expanding by extending its distribution area and creating a second tasting room here.

The company increased production this year hoping to increase sales, and its owners say unexpectedly high demand already has absorbed that extra cider.

“We saw 80 percent growth this summer over last,” says Neal Hennessy, who co-owns the company with his friend, Grant Barnes. “We’ve used up the extra we’d planned for and are making more.”

Hennessy says the company sold about 5,000 gallons last year, and already has sold 8,200 gallons this year as it looks to surpass its goal of 10,000 gallons.

Hennessy says projections show the company actually is on track to exceed 12,000 gallons, and it expects 20 to 30 percent growth in 2017.

He says that what started with Barnes brewing cider in his garage back in 2014 now has grown into a full-time business.

“It started when Grant asked his wife for a beer-making kit for Father’s Day, and she accidently got him a cider-making kit instead,” says Hennessy. “So he made it … but it came out tasting horribly. From there, I guess he just became intrigued with the process.”

Hennessy says at that time he and Barnes were co-workers who sold cell phones for AT&T Inc. Neither had ever run a business, but after talking it through, they decided they wanted to go for it.

“We made our first batch of product in the summer of 2014, and went door to door asking different area restaurants and pubs if they’d like to put our product on tap,” says Hennessy. “We were selling phones by day and cider by night, until we met with Click Distributing.”

Hennessy says the two initially approached Click Distributing East, a Kent-based wholesale distributor of wine, craft beer, specialty beers, and spirits, to explore what steps they needed to take to grow their business. The distributor decided to take them on almost immediately.

One Tree is located in the Argonne Commercial Center, at 9514 E Montgomery. The company leases two spaces there, which mirror one another in layout, and total 4,800 square feet. It uses a majority of the space for production and warehouse storage, with a small portion set aside for offices and a tasting room.

The tasting room was expanded this year to provide more seating, as well as space for a small art gallery for displaying local artists’ work, and also for displaying merchandise, such as growlers, pint glasses, and T-shirts.

The tasting room is open Thursday and Friday 3 p.m. to 9 p.m. and Saturday and Sunday noon to 9 p.m., offering bottles, growlers, pints, and samples of cider, and a selection of other local ciders on tap.

Hennessy says the company now is planning for the opening of a second tasting room next spring. It will be located in the fast-growing Kendall Yards urban village development northwest of downtown Spokane along the Spokane River.

“Greenstone (Corp.) is breaking ground on the new building now,” he says. “We’ll be tenants in a lower level space of the new building that will fill the space between Nectar Wine & Beer and Spa Paradiso.”

One Tree has six employees, including its owners. Hennessy says the company also will hire additional workers for special events.

“That’s kind of our way of trying out new people for more permanent roles too,” he says. “We’ll likely need to hire a few more for the new tasting room this spring.”

Hennessy says the cider brewing process is similar to how apple wine is made, using a combination of fruit, juice, yeast, time, and temperature to create a final product.

Hennessy says the process of cider making includes several steps from fermentation, to blending, to carbonation, and because the company uses different sizes of tanks and vessels, not every batch is the same size.

“We typically go through 5,000 gallons of apple juice every six to eight weeks,” he says. “From the time we have juice until it is in a keg, bottle or can is roughly four to six weeks.”

Unlike many cider makers, Barnes says, One Tree doesn’t use syrups or other flavor extracts to create its flavor varieties. Instead, it uses as many local fruits and ingredients as possible, adding them by hand to each batch.

He says to create the flavors, the company uses a process called back sweetening. This involves adding juice from those ingredients into the cider to sweeten it.

“Basically, what we have is a kind of fermented apple wine, and we then take juice from either berries or lemons and add it back in,” he says. “Some recipes get a bit of cane sugar added to sweeten, but for the majority of batches, the juice itself is enough to sweeten it, because cider itself is naturally sweet.”

Many of the company’s ciders are what some customers might consider unusual, with its year-round flavors including bottled ciders in lemon basil, caramel cinnamon, huckleberry, and dark cherry varieties.

“I wouldn’t say we have unusual flavors, but we do have more than the typical apple for sure,” says Hennessy. “Apple is great, but it’s not our most popular flavor.”

The company’s crisp apple cider is the only one available in cans. It also produces seasonal flavors, including cranberry, peach tea, and pumpkin.

“We’re due to start making pumpkin this week,” says Hennessy.

This year, the company has partnered with distributor Eagle Beverage Co. to make its cider available in Montana, and with Craig Stein Beverage to lay out plans to bring its cider to the Boise, Idaho, and Vancouver, Wash., markets. Hennessy says the company plans to launch in Vancouver this month, and Boise early next year.

Hennessy says the company plans to expand its distribution area to include Oregon by next year. In the meantime, it’s just striving to make sure it’s serving its current markets well.

“Our goal for now is to keep filling the pipeline in areas we’ve already committed to,” he says. “At the same time, we’d like to move into Oregon. I think we can do both, but with this much growth it may take a while.”

One Tree’s products can be found in local grocery stores such as Yoke’s and Rosauers, and it soon is to be carried by Costco Wholesale Corp. stores. One Tree also is on tap at several locally owned restaurants, as well as at tasting rooms such as those operated by The Growler Guys and Steady Flow Growler House.

Hennessy says hard cider has been growing in popularity, particularly in the Northwest and in the northeast U.S.

“On the financial side, it’s still lumped in with the beer market,” he says. “But in the last few years, market shares in cider have been doubling pretty consistently. I would say Spokane is one of the top six cider markets nationally.”

Hennessey says there are competing cider makers in the area, but he feels they usually have a different focus.

“Our focus is regional, and we use a dessert variety of apples in our product,” he says. “Some other local cider makers might focus on only seasonal production, or traditional style ciders made from other apple varieties.”

He says he believes the industry is growing enough that there is still room for everyone to grow and succeed. “We’re competitive in the sense that we’d like to make the best product possible, but we’re also supportive of others who’re starting out and growing the industry.”

Emily Ritchie, Portland-based director of the Northwest Cider Association, says the trade organization has definitely noticed a growth in cider production in the Northwest.

“As an association, when we began six years ago, we had seven members,” she says. “Now, we have close to 80 already, plus another 20-odd members in the planning phases who hope to open for business soon.”