Out of the bag: Grocers prepare for potential plastic ban 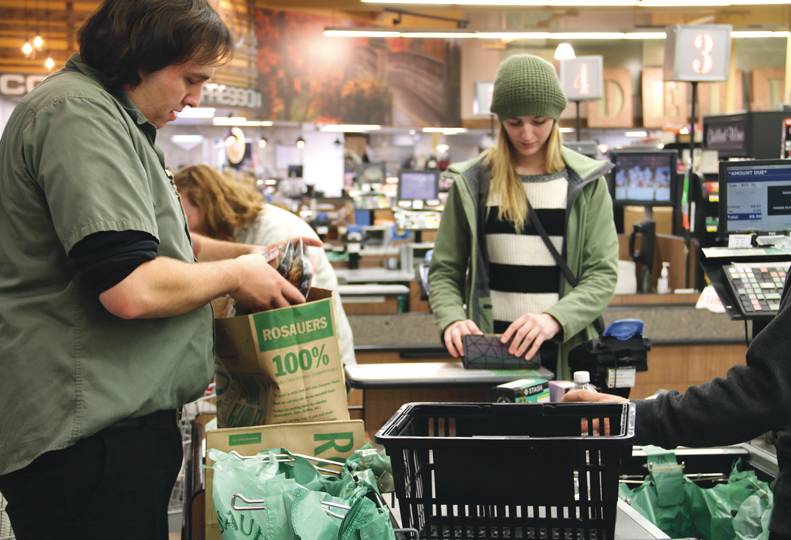 Retailers throughout Washington state soon could be banned from offering customers single-use plastic bags, in an effort to reduce plastic waste and better protect the environment.

State House Bill 1205 and its companion Senate Bill 5323 were introduced earlier this month, at the start of the 2019 legislative session, says Heather Trim, Seattle-based executive director for Zero Waste Washington, an organization that says it works to combat climate change and pollution through legislation.

“We have been working on plastic bag legislation for years now, but there’s been a big increase in public awareness recently that’s enabled us to push harder,” she says. “2018 was kind of ‘the year of plastic’ with national publications highlighting the problem, and I think more people are really starting to get it.”

Some Spokane-area retail and grocery chains have already come out in support of the legislation and are preparing for how they might approach the transition to a nonplastic bag alternative.

“We’re still discussing what the best approach will be,” says Matt Grittner, store director for My Fresh Basket, a locally owned grocery store that opened in Kendall Yards in June 2017. “A decision like this will take some time and research on the part of the industry in order to understand the impacts and follow through on the best option.”

Grittner says My Fresh Basket offers customers plastic and paper bags as well as the option to bring their own canvas bag for groceries.

“We still have some customers who like the plastic bags and choose to use them for trash liners or other things at home,” he says. “But the majority of our customers have already adapted to bringing in their own canvas bags for shopping.”

Grittner says he believes that trend could make it easier for legislation banning plastic bags to pass, if not now, then in the near future.

“The writing is on the wall,” he says. “People are more conscious and aware of environmental impacts now, which I think helps them view this as a positive change.”

“I think all of us in the industry share a concern for our environment and how plastic is affecting it,” he says. “The challenge we see in this effort is finding an eco-friendly and inexpensive replacement for plastic bags.”

Philipps says the bill likely has enough support to enable it to pass into law, and if it does, Rosauers is prepared to make the transition to new bagging options.

“We’re hoping there will be a period that allows stores to eliminate their current stock of bags, but then we’re ready to move as quickly as we can to a paper alternative,” he says. “We’re also hopeful the bill will include a public education period, so that customers will have time to understand, prepare for the change, and feel that they’re part of the solution.”

Some well-known retailers already have discontinued their use companywide or announced plans to do so in the coming years.

By the end of 2018, Bellevue, Wash.-based thrift retailer Savers Inc., known in the Pacific Northwest as Value Village, had already phased out plastic bags at its store locations.

Last August, Cincinnati-based Kroger Co., which owns Fred Meyer and QFC retail and grocery stores, announced it plans to phase out the use of plastic bags at all of its stores by 2025.

Trim says the proposed bill would accomplish three things: it would prohibit the use of thin, single-use plastic carryout bags, require a pass-through charge of 10 cents on paper carryout bags and durable plastic film carryout bags, and require the use of recycled-content bags with compostable bags being green or brown tinted.

The bill also includes a list of exemptions for certain kinds of bags, such as those used for produce, prescription drugs, or smaller hardware items. Additionally, recipients of food assistance programs would be exempt from the 10-cent fee on the paper bag option.

Ultimately, Trim says, the goal of the bill is to provide incentive for customers to bring their own bags.

“There are currently 27 local plastic bag ordinances in the state, including two counties, San Juan and Thurston,” she says. “Since their implementation, those ordinances appear to have gone very smoothly, so we’re hopeful a statewide measure would work similarly.”

Trim says the recycling industry has also called attention to the problems plastic bags can cause, particularly in the sorting process.

“Recyclers are concerned about bags contaminating the recycling stream and clogging equipment,” she says. “We’ve also seen some impact from China’s National Sword restriction, as they don’t want to accept plastics either.”

If the bill passes, Washington would be the second state in the U.S., after California, to impose a statewide ban on single-use plastic bags, Trim says.

“Hawaii also has ordinances for all five of their islands, so essentially a statewide ban,” she adds.

Trim says if the proposed bill passes in Washington it would probably take a year to go into effect. She says Zero Waste Washington is pushing to include language in the bill that would require an educational component to help stores and customers with the transition.

“It helps to have placards near the register so customers can read them and understand it’s a law rather than the store’s policy,” she says. “Ideally, there would be an education campaign two months prior to implementation that would continue for two months after.”

While Rosauers is prepared to switch to a paper bag alternative, Philipps says many in the industry also are concerned that paper suppliers won’t be able to keep up with the increased demand that would likely result.

“The cost of paper has increased considerably over the last few years, and there’s a general concern that suppliers are already struggling to keep up with today’s demands,” he says. “The proposed 10-cent charge for paper bags would help retailers offset those costs and also help encourage customers to choose reusable bags.”

While he agrees there has been a movement by customers toward using nonplastic bag alternatives, Philipps says a large percentage of people still choose plastic for various reasons.

“We ask every customer what kind of bag they’d like, and I think that helps encourage them to consider that decision more carefully,” he says. “We have seen an increase in the number of people asking for paper or bringing their own bag, but the industry as a whole is still predominately plastic.”

Jan Gee, president and CEO of Olympia, Wash.-based Washington Food Industry Association, says the organization, which represents smaller grocery chains such as Rosauers and Spokane-based Yoke’s Fresh Markets, has spent a lot of time negotiating with the bill’s sponsors as well as environmental groups, on what should be included.

She says the WGIA is working to ensure there are at least two provisions in the bill that would help ease the transition to non-plastic bags for both customers and retailers.

“The first is that this won’t be an immediate switch, so the industry has time to exhaust its current inventory of bags,” she says. “The second is the inclusion of a statewide education program that will help consumers understand and expect the change before it comes about.”

Like Philipps, Gee says the association’s main remaining concern regarding the bill is the cost and viability of the paper bag option.

“In taking away plastic bags, customers would be given the option of using a paper bag for 10 cents,” she says. “The concern we have is that many of the districts where our stores are located include low-income customers who take the bus or walk to the store and need their groceries to be in something waterproof.”

Gee says she’s proposed the idea of compostable plastic bags or a bag made with heavier plastic that’s sturdy enough to be reused several times over.

“We’d like to be able to offer a thicker, reusable plastic bag, which is already used in some communities where the film plastic bags have been banned,” she says. “We’ve had some pushback on that idea, so going forward, our focus is in agreeing on a second, waterproof option for customers that’s available at a reasonable cost, and able to be mainstream manufactured.”

Gee says the initial hearings on the bill have provided a good opportunity for all involved to voice their concerns, and she believes the legislation has a good chance of becoming law.

“I know there are still some concerns, particularly from those in the paper industry who oppose the added fee for paper bags,” she says. “It’s going to be a struggle, but it’s still early in the process and we’re hopeful that as the bill moves forward, we’ll find a deal everyone can support.”

Holly Chisa, spokeswoman for the Lake Oswego, Ore.-based Northwest Grocery Association, says the organization, which represents large chains, including Albertsons, Safeway Inc., and Costco Wholesale Corp., has been working on issues surrounding plastic bag bans since the city of Edmonds, Wash., issued a ban on plastic bags in 2009.

“We’ve traveled all over the state meeting with city councils to talk about these issues, and we feel that engaging on the state level made sense from a holistic point of view,” she says. “We support this legislation mainly because it allows for consistency. A statewide standard for stores and customers helps ensure everyone has the same expectations no matter where they shop, which is important in our industry.”