Outsourcing with the blind and visually impaired 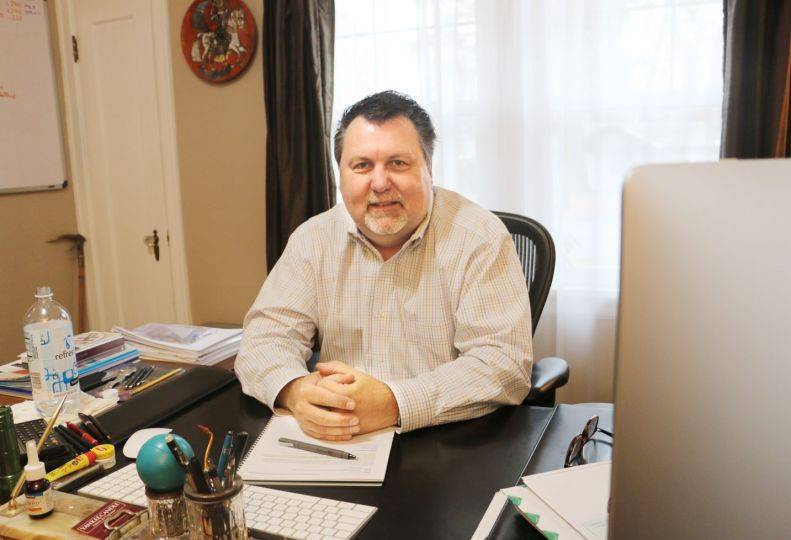 A client with whom Dubay had previously worked reached out to Dubay to see if he’d be able to help with tasks such as performing outreach and customer surveys.

“In a moment of brilliance, I said something like, ‘As a matter of fact, we’re starting a company that does just that,’” Dubay recalls. “I hung up the phone and thought, ‘Well shoot, now I need to figure out how to start a company and build a system that can do that.’”

Dubay has worked in client services and outsourcing throughout his career, so he was familiar with the work that first client requested. However, building a team from scratch that could handle things like business-to-business and business-to-government lead generation, appointment setting, surveys, and account management was a new challenge.

As he was creating Strategic Contact Solutions, Dubay, who is the owner and vice president of the company, began thinking about the kind of people who would make good employees for a company that focuses on listening to client needs.

“During some of my consulting work that I had done for a couple of companies here and elsewhere, I had met a couple of people who were blind, and I started to learn about some of the challenges they were facing with employment,” Dubay says.

“If they’re fortunate enough to land a job, usually there’s not as large of a percentage of professional opportunities,” Dubay says. “They tend to be more menial, labor-intensive things.”

Dubay says blind and visually impaired employees tend to have skills that are perfect for the work Strategic Contact Solutions does.

“They’re very loyal and very dedicated, have phenomenal active listening skills, they’re hard working,” Dubay says. “They’ve already got all of these other challenges in their lives, so a hiccup here or there doesn’t slow them down. They just push through.”

Dubay, who is sighted, says the company currently has seven employees, but that number can fluctuate with the number of projects the company receives.

“Our clients can hire us for the long term, or they can call us (for) a project that’s three months long without having to hire and recruit and train, they can just outsource that to us,” Dubay says.

Dubay says his employees function as part of the client’s team.

“The line between who we are and who our client is, is pretty much blurred or erased,” he says.

“With our team of blind and visually impaired people, we like to listen between the lines,” he says. “Most people won’t give you their real response the first time you ask them a question, at least in the business world. You can take it at face value, but you don’t get a lot of good decision-making data and good interaction. We teach them how to follow that up.”

Most of the people Dubay hires are familiar with computer work, he says, because many of them use computers in their day-to-day life, modified by accessibility tools such as screen magnification or software that converts text to audio.

As for getting to know a client, Dubay says the employees focus on gaining at least a base level of knowledge about the client’s goals and background.

“We’re never going to get them to be an expert or have the same knowledge as someone who’s been there 15 or 20 years would have, but we want them to have enough knowledge that they can have a knowledgeable conversation and instill confidence in whoever they’re speaking with,” Dubay says.

Technology plays an important role in Strategic Contact Solutions’ operations, not only due to the needs of its blind and visually impaired employees, but also because all employees work remotely. When Dubay started the company in 2013, three or four employees worked from an office on the South Hill. However, as Strategic Contact Solutions grew and took in more blind and visually impaired employees, a brick-and-mortar location became less practical.

Dubay says that a few years ago, an employee who is blind found herself running late one day due to street construction near her apartment. While she was explaining how the construction disrupted her routine, Dubay says he found himself worrying that she might inadvertently injure herself trying to navigate a new route or “end up in the bottom of one of these ditches.”

“That kind of gave us the kick to say, ‘You work from home and we’re going to figure out how to push this stuff into the cloud so you can access it from home with a high-speed internet connection.’”

That employee later moved elsewhere in the state, but wanted to continue working for the company. Dubay says that’s when Strategic Contact Solutions became a fully remote company.

Dubay is now the only person in the company working in Spokane; he conducts business from his home office on the South Hill. He says the company has employees as nearby as Idaho and as far away as Mexico, where one employee is working while doing mission work.

“With the training that we’ve done, the systems that we’ve put in place … we’ve taken all of the subjectivity out of it and distilled it down,” he says.

Dubay declines to disclose the company’s income, but says that Strategic Contact Solutions, which is privately held, makes less than $1 million in annual sales and serves between 20 and 24 specific clients per year. He says the project-based nature of the business, which is still working toward gaining more permanent partnerships, means that sales can be variable, depending on how many projects his team can take on.

Dubay says the company has clients throughout the U.S. and Canada. He says Strategic Contact Solutions has been involved in projects such as attracting business customers to a tourism and convention facility in Florida, rebranding for a credit union in the southeast, and conducting surveys for an accounting firm in the southeast.

The main obstacle Strategic Contact Solutions faces, Dubay says, is the misconception many people have that the company provides only telemarketing services.

“We tend to be more knowledgeable and more conversational, versus read a script and check a box,” Dubay says. “What we do, anybody can do, but nobody does. It actually takes work to make something simple and seamless, and then we’ve added our technology to make it incredibly efficient and effective.”

Dubay says that as the company grows and establishes more client relationships, he wants to put more effort into connecting with potential clients in Inland Northwest, including the Spokane area.

“I’ve always done a terrible job of promoting us locally,” he says. “That’s one of the things that we’re working on next year: How do we get our name out in this area?”