Many choose to leave jobs during challenging time, observers say 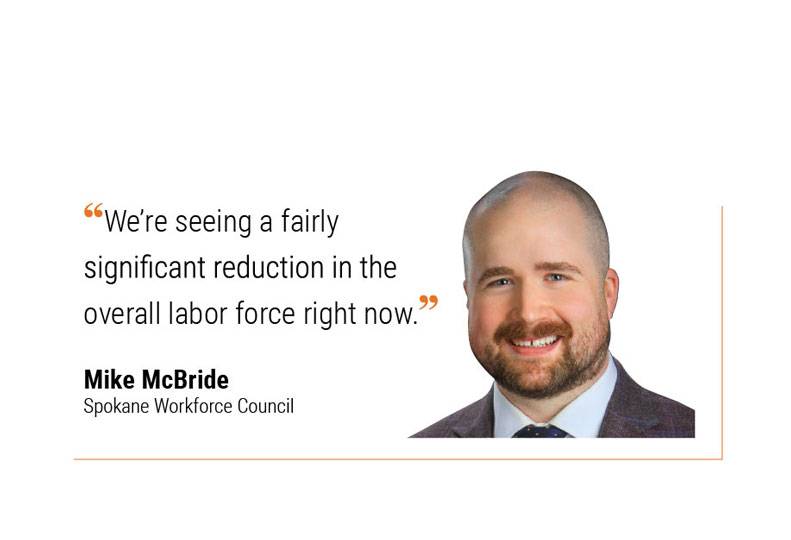 Weir’s client, a veteran educator, was right against retirement age.

“She had more than enough years in the pension system,” recalls Weir, a senior vice president and senior portfolio manager for the downtown Spokane office of RBC Wealth Management. “I told her, ‘You can work because you want to – not because you have to.’’’

Beyond 60 years of age and deemed to be a greater risk of contracting COVID-19, the long-time schoolteacher decided before the end of that conversation to call it a career, Weir says.

“It was a clear case of the pandemic playing a role in the decision to retire,” he says. “Due to the uncertainty of where she’d be teaching, at home or at school, for 2020-21 ... she was ready to move on.”

The story is one of many like it that are playing out across the Inland Northwest among residents who are at or nearing retirement age—and who are deciding to quit working full time due, at least in part, to the pandemic, he says.

Though vaccines now are in production and being administered, a few financial advisers here say some clients are still uneasy about the possibility of returning to work.

Due in part to the strength of the stock market in 2020, many 401(k) plans, other individual retirement accounts, and defined pensions, grew handsomely, making retirement a more viable option for a wider swath of people, says Paul Viren, owner of Viren & Associates Inc., an independent financial planning company based in Spokane.

“There are some who sped that up,” Viren says of some of his clients who recently decided to retire.

And more specifically, Viren pointed to two professions in particular, education and law, from which some of his clients ended their careers. He says he’s heard similar sentiments from other financial advisers and planners as well.

“For teachers who’ve spent more than 30 years doing in-person learning to have to go to virtual learning is a huge transition. For some, it just proved to be too much,” Viren says. “As for attorneys, I’ve had more than one tell me they miss the in-person interaction. Working from home isn’t as fun, and so they decided to retire.”

The labor force total represents the number of workers who are employed and unemployed. McBride says it’s reasonable to conclude Spokane County’s drop in labor force is due in part to older workers deciding to retire.

The decline likely isn’t due to people leaving Spokane County, he says.

McBride says it should be noted last fall he saw a spike in online job postings, and the month of October was the strongest of the year once the pandemic arrived.

But November and December brought new statewide economic restrictions, and the seasonality of the construction industry also played a role in the unemployment and labor force levels, he said.

“The COVID rates in Spokane also increased enormously in November and December, which may have also caused more people to leave the labor force as well,” McBride says.

Washington state employment figures show that at the end of 2019, workers aged 65 and up made up 5.6% of Spokane County’s total labor force, a percentage McBride called “significant.”

The worker pool across Washington state of those 65 and up is even greater at 6.2% of the total labor force. Spokane County’s 65-and-older worker population is on par with the rest of U.S. at 5.6% of the nation’s total workforce, statistics show.

McBride says it won’t be until late 2021 or early 2022 that analysts will have a better idea of just how many people retired in 2020 in Spokane County and across the rest of the state.

Spokane-based financial planner Sarah Carlson says 2020 was probably the busiest year of her career as she and her staff dedicated more time than ever to helping clients prepare for retirement.

“We’ve seen those at or nearing retirement age just make the decision to move on to the next stages of their lives in the midst of this pandemic,” says Carlson, who operates and owns Fulcrum Financial Group LLC.

Before 2020, Carlson says, she hadn’t seen so many people in their late 50s and early 60s seek the company’s services in anticipation of retiring.

Among the largest group of her clients that retired last year were high-end wage earners in the medical profession, mostly physicians and high-ranking executives, she says.

“A lot of people expressed an urge to do something different, and for them, COVID-19 seemed to be thing that motivated them to go in another direction,” she says.

And Carlson says she doesn’t think 2021 will be any different for those considering retirement.

“It’s going to be a really interesting year,” she says.

Eric Green, financial adviser and founder of Spokane-based Purpose Financial Advisors LLC, says he has two clients who retired because the pandemic-induced lockdowns and restrictions brought the end to their long-time businesses.

“One client had an events-related business, and the other operated a signage, marketing, sports-related company that advertised on billboards,” he says.

Green says each felt they were too advanced in their professions to try to reinvent their businesses, and too far along in actual years to enter another line of work.

Neither of those clients were in the financial position that they’d hoped to be in by the time they retired.

Green says he’s used the pandemic as an opportunity to talk with all his clients about the importance of being ready for the unexpected.

“There’s a good lesson to be learned about the importance of saving in a time like this,” he says.