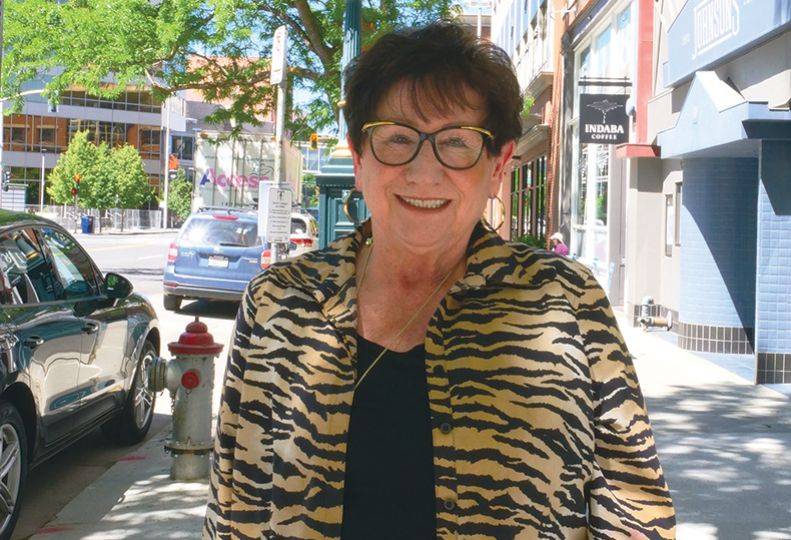 Susan Ashe, executive director of the Health Sciences and Services Authority of Spokane County, has announced her retirement, effective by the end of this year. She is 72 years old.

Ashe was born and raised in Omak, Washington, a town of 5,000 located in the foothills of the Okanogan Highlands in north-central Washington. She moved to Spokane over 50 years ago and took courses at Spokane Falls Community College and eventually earned her bachelor’s in general studies with a focus on journalism from Eastern Washington University.

As a young single mother, she began working at Kaiser Aluminum Corp. in 1978, where she moved up the ranks over her 24-year tenure. In 2003, she became the director of legislative and public affairs for the city of Spokane, where she served under four mayors over a 5 1/2-year timeframe. In 2009, she opened her own public affairs firm, Ashe Public Affairs, which led her to become the interim executive director for her client, HSSA, which was in the early stages of being formed. In 2012, she was formally appointed to the role. She is the sole employee, with two contract workers that help with bookkeeping and legal services, and she oversees a budget of nearly $12 million.

The Journal recently sat down with Ashe and discussed what she calls her three separate careers over the last half-century of work, what she learned, and what she looks forward to in retirement.

Looking back on your three careers, what do you remember most fondly?

Each career was great in and of itself. I really appreciate what I learned and was able to do at Kaiser, likewise at the city of Spokane, working in legislative affairs and bringing home state and federal money to help Spokane. HSSA has been great because it was a startup when it came about through Legislature.

At Kaiser, I was hired in 1978 and worked there for almost 24 years. I started in the offices of the Washington Mutual building where we had a couple of dynamic leaders in the community: Bruce Macfayden and Joe Piedmont. Bruce was on the governor’s cabinet. The secretary at Kaiser was Louis Stratton who became a state senator. Joe Piedmont went on to run all of the public relations for Washington Water Power Co. before it became Avista.

We were a kind of small, comfortable, quasi-lazy community 45 years ago. And now, we’re thriving and progressing and doing exciting things. And there’s such great potential, that keeps me motivated. I’m sure when I retire, I’ll find something to pay attention to and be a part of.

You remember Spokane as a sleepy town?

Yes. I would say not necessarily with big dreams. I think it started with Momentum ’87 and went on with the whole development of Riverpoint Campus. Moving the health sciences facility to Spokane with a focus on research for Washington State University, and University of Washington and Gonzaga University’s partnership. It’s all about economic development.

I’ve heard a lot of people talk about Momentum ’87, Were you a part of it?

That was sort of the first big economic development initiative that Spokane had. I think it was good and did some good things. I was working at Kaiser when it started, and we contributed a lot of help to the cause, but I was never formally part of the group.

In the world of economic development and competition, the ball is always changing. You have to keep moving forward. You can’t just do one thing, like Expo ’74—which I worked for, by the way— and then stop doing things for how many years? You can’t just do one thing and stop. Every year you have to look at it. You have to have a strategic initiative to become a better community. What we want, I think, and should want, is to create jobs and opportunities to lift people out of poverty here, because our poverty rates are still too high.

I was in charge of housing all the entertainment for Expo ’74. There were several performances a day for that six-month period. Finding housing for all those folks, it was challenging to say the least. We didn’t have the hotels that we do today.

Again, it was a community that had a bigger vision than its current self. And that motivated it to create the World’s Fair here. And the most successful and first profitable World’s Fair ever. Sort of like the largest road race in the world, Bloomsday, until Atlanta Peach Tree got bigger. Sort of like Hoopfest is the biggest 3-on-3 basketball event in the world, even today.

What advice would you give to someone that wants to have the same career as you?

You have to have a passion for it and your skills better be darn good in terms of writing and speaking. You have to be flexible and adaptable and be able to manage issues and tasks in order to be successful in this field. Pay attention to what’s going on, not just in your community, but in the nation and world. Kaiser is an international company with multiple locations. We had to pay attention to the world.

Economic development is my true passion. I remember a friend saying to me years ago when I was working at Kaiser, “Why would you want to work at Kaiser?” And I responded that this is probably the only place in Spokane where workers can have great salaries and excellent benefits–and these are often workers coming out of high school. They then turn around and send their kids to college. And to me, that is important.

My family didn’t have a lot of resources when I was growing up. My father was a union president. So, I understood the value of unions and companies working together and the benefits that are important to a community to help its employees. The wealth and health.

Because working at Kaiser helped catapult your life too, right?

It definitely did. Again, I had great mentors and leaders and people who gave me immense responsibility. But I worked hard too.

In the early days of Kaiser, we had communitywide challenges in sports. It’s when Bloomsday was coming about, and everybody was interested in being healthy and physically active. Kaiser Wellness Games we called them, and we held them in the community colleges.

But we had our challenges too. We had the fires. We had the accidents. We had the injuries, and we had some deaths. We had a two-year labor dispute. Those things are difficult, and you have to find your balance. And again, I always go back to telling the truth. It may not be the truth somebody else wants to hear, but it’s your truth.

What do you see yourself doing in your retirement?

I’m going to rest for a while. I don’t know how long a while is, but I have grandchildren in Houston and Chicago who I’d like to visit and stay a bit longer when I go out there.

I’ve already had a few suggestions of what I could do with all my free time. I’m being careful with that to not overload. Maybe take on a project that has a specific start and end date. I’m very much interested in criminal justice reform, as well as diversity and equity issues here. I think those need to be improved, and I’ve said that my entire life here in Spokane. I’m pleased to see more women and people of color involved, but we need more. I’d also love to do some work for the YWCA and the work they do with helping domestic violence survivors. Those are some of my areas of passion.