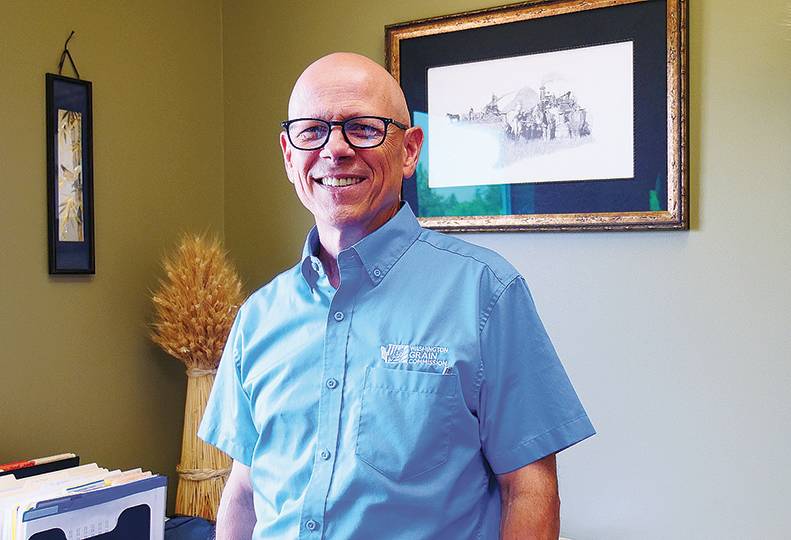 After 30 years with the Washington Grain Commission, Glen Squires, its CEO, will retire effective Nov. 1. His successor will be Casey Chumrau, the current executive director of the Idaho Wheat Commission.

Squires, 64, grew up on a family fruit farm in north-central Utah. He managed a trucking company in Salt Lake City for 10 years before deciding he wanted to be involved in agriculture once again. He returned to school as a nontraditional student, married with two children, and received degrees in agricultural business and business administration from Utah State University. Thereafter, he and his family moved to Washington state, where Squires received a master’s degree in agricultural economy at Washington State University.

After graduating from WSU, Squires was hired by the commission as an analyst and has held various roles over the years before assuming the role of CEO in 2012.

In his position, he has overseen a staff of six employees and a $6 million annual budget that supports the commission’s three main sectors: marketing, research, and education information.

The Journal recently sat down with Squires to discuss his career in the agriculture industry, some of the challenges he’s faced, and what he looks forward to doing in his retirement.

Can you speak to the importance of the wheat industry, especially as it relates to Washington state?

People forget how important food is. The Arab Spring protests and uprising just over 10 years ago, a lot of that was because of a lack of food. What’s going on now in a lot of places is that people are realizing that food scarcity is a problem.

Just off the top of my head, there are over 300 crops grown in Washington state, second only to California. That’s a lot of crops, lots of food. Washington fluctuates between the third and fourth largest wheat-producing state in the country.

That being said, here in the Pacific Northwest, we produce 310 million bushels of wheat a year. That is the equivalent of 128 billion cinnamon rolls, 245 billion sponge cakes, or 16.1 billion Triscuits.

Have you noticed changes in practices in relation to environmentalism and sustainability?

Wheat breeding has been going on at WSU since the late 1800s. The wheat breeders have to breed wheat that can sustain heat and cold.

In Washington, we are about 90% dry land. Generally speaking, we rely on the weather. On years when we don’t have much water, like last year, the plant has to be able to withstand and grow on very little water.

That’s why a lot of our funding goes to research and development to address disease and develop different varieties of wheat in which thriving in extreme weather is a component.

I sometimes refer to wheat farmers as the original environmentalists, because their livelihood depends on the land and the land being protected. It’s the soil that is productive, and there are unbelievable efforts in tillage practices, research, and equipment that has kept the soil from going into streams. There is a lot of environmental effort and different practices that have taken place to reduce erosion.

What are some of the biggest challenges that you’ve faced during your time with the commission?

World events can influence our work. I remember when India and Pakistan had this huge conflict that caused a restriction on their imports. At the time, Pakistan was our No. 1 market. I had the opportunity to go to Pakistan’s capital, Karachi, under armed guard. It was a scary time. Just like when Russia went into Ukraine, we had the government and media calling and asking, “What can we do to help you grow more wheat?” I say to that, “Well, can you make it rain?”

Another example is, for 30 years, China had a ban on Pacific Northwest wheat exports. They were worried about a potential spore that they didn’t want to infect their own crops. We worked on that for a long time. We worked with the U.S. Department of Agriculture and pest-risk analysis to determine the likelihood that the spore would infect China’s crops. Eventually, working with Washington, D.C., and other commissions, we traveled to China and had the ban lifted. We made an agreement that they would test the wheat, and, if it went over a certain level of detection of the spore, they could reject it. If not, they would accept it. That was in 1999, and they have accepted our wheat ever since that agreement.

It sounds like a lot of your challenges are also some of your greatest successes.

I would never say it was all me. I may have had a part in it, but it’s been a collective effort. Looking back over time, I’ve had the tremendous opportunity to work with high-caliber people. I’ve appreciated the professionalism from farmers, staff, legislatures, and everybody in between.

What do you look forward to in your retirement?

I look forward to staying active and getting involved in good humanitarian causes. I’m the beneficiary of good mentorship through my career. There are a lot of people I look up to whom I have learned from and who I have watched as they’ve continued to be productive and contributing to society. That’s what I want to do as well, but I’ll be able to do it alongside my wife.