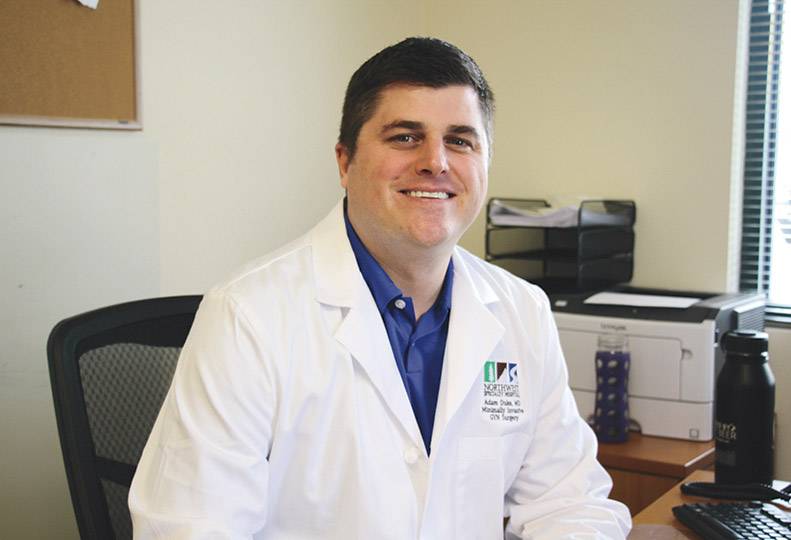 Dr. Adam Duke contends that women who have endometriosis largely have been failed by the medical community.

Duke, an obstetrician and gynecologic surgeon who specializes in pelvic pain and endometriosis at Northwest Women’s Care, in Post Falls, treats endometriosis by excising, or cutting, it out of the body. He claims excision has a recurrence rate of less than 20 percent, and says that his fellowship training enables him to remove endometrial lesions and perform any necessary reconstructive surgery, such as bladder resection, after removing the lesions.

Endometriosis affects about 10 percent of women worldwide, Duke says. The condition is characterized by cells that resemble the endometrium, which is the lining of the uterus, appearing in other parts of the pelvis and abdomen.

The cells implant and, at first, are receptive to the body’s hormone cycles before becoming endometriotic lesions and then scarring. The lesions produce their own hormones and then stop responding to other hormones, both natural and artificial, Duke says.

There are several theories as to why endometriosis occurs, but the medical community has yet to find a definitive answer, he says.

The condition is extremely painful, Duke says, but women often find it difficult to convince a physician that their pain is real. Many OB/GYNs, he claims, decide to treat the condition by performing a hysterectomy on an endometriosis patient.

Duke grew up in Colorado and attended Creighton University, in Omaha, Neb., where he earned a bachelor of arts degree before enrolling in the university’s medical school. He completed his residency in gynecology at Eastern Virginia Medical School, in Norfolk, Va.

However, Duke says he was not fully satisfied by the gynecologic surgery training he had received, so he completed a two-year fellowship in minimally invasive pelvic surgery at the University of Tennessee, in Chattanooga, Tenn.

As opposed to excision, other treatments for endometriosis have a recurrence rate of up to 80 percent, Duke asserts. One such method, ablation, involves cauterizing lesions.

In Duke’s opinion, attempting to treat endometriosis with a hysterectomy makes no difference in a patient’s pain due to endometriosis’ nature of growing outside of the uterus. Some doctors recommend pregnancy as a treatment, which Duke says might temporarily reduce pain because periods stop, but he contends that ultimately can make endometriosis worse—and many women who have endometriosis are unable to become pregnant to begin with.

Hormone therapy, in which a woman is put into temporary menopause, is a popular method of treatment, but Duke believes the side effects can result in permanent menopause.

Meanwhile, Duke says, a woman who has endometriosis and is pregnant or on hormones has no idea that the lesions are getting worse.

“You can put patients on all the birth control, whatever you want, and it’s not going to help anything because that endometriosis is now scarred in. Even if you remove the ovaries, they’re still going to have pain,” Duke asserts. “You can mask the symptoms of endometriosis, but you cannot stop or cure it. You cannot reverse the process of endometriosis without cutting it out.”

Duke claims other gynecologic surgeons will operate, cauterize a few lesions, and will inevitably have to operate again. He says he regularly sees patients who have had as many as 10 laparoscopic surgeries in their physician’s attempts to treat the condition.

Duke claims to be the only fellowship-trained minimally invasive surgeon in all of Idaho. He says some 75 percent of the surgeries he performs are for endometriosis, and he has performed over 1,000 endometriosis surgeries.

“What I try to do is get in there early, cut it out so that it doesn’t come back, without putting patients on all these frankly scary hormones,” he says. “This way I get to make a real positive impact on a patient’s life that’s an immediate impact, they wake up from surgery and they’re having significantly less pain than when they went into surgery.”

When Duke first began practicing in Post Falls, he was performing one or two endometriosis surgeries each month—now he’s operating on endometriosis patients 10 to 12 times a week, he says.

Some of those patients, he says, were unaware of their endometriosis until they realized they were unable to conceive.

“I operate on quite a number of patients whose only complaint is infertility,” Duke says. “A lot of endometriosis can be subclinical, so you don’t really know that you have it, except you can’t get pregnant. I have patients who’ve tried in vitro fertilization to get pregnant and not been able to, and then I’ve done surgery on them and they get pregnant after that.”

Duke says one thing many people don’t understand about endometriosis is that it “runs in packs” with other symptoms, meaning it’s rare for a patient to have the condition without additional issues— he says 70 percent of endometriosis patients have interstitial cystitis, which is chronic inflammation of the bladder.

Duke believes that part of the reason so many physicians don’t understand endometriosis or the correct way to treat it is due to the imbalance in education that OB-GYN students receive.

“Unfortunately, OB-GYN residencies these days are so obstetrical-heavy,” Duke says. “Most OB-GYN residency programs, 75-80 percent of your time is spent delivering babies.”

“There’s a big push right now, nationally, to separate obstetrics and gynecology and have them be distinct specialties,” he says.

However, Duke maintains that the governing board for OB-GYN physicians, the American College of Obstetricians & Gynecologists, or ACOG, has been resistant to that change.

“Yes, things are starting to change, but they’re not changing fast enough and they’re maybe not changing in the right direction,” Duke says.