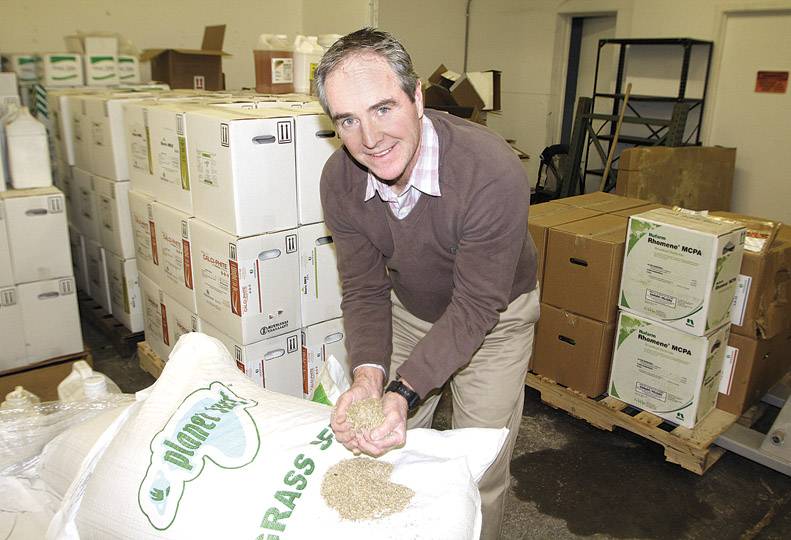 -—Kevin Blocker
Jim Connolly is co-owner of Planet Turf, located at 3030 E. Mission, in Spokane. He has worked in agronomy since the late 1980s.

Jim Connolly has reached the top of his profession in agronomy. Twice.

He was once a United States Golf Association agronomist and now he is the co-owner of a growing grass seed and fertilizer company.

From 1988 to 1994, the Washington State University graduate was then just one of eight USGA agronomists in the country.

“I think it was in ’88 at the U.S. Open in Brookline, Mass., and I’m standing on the course next to Curtis Strange in the middle of his round,” Connolly says. “It was awesome.”

Today, however, Connolly is rubbing elbows with grass seed and fertilizer sales reps and golf course superintendents. He and his wife, Amy Connolly, own and operate Planet Turf, which has specialized in improving golf course conditions.

Planet Turf’s main products include fertilizers, pesticides, and grass seeds. Established in 1999, the turf company manufactures fertilizers that are used on 60 percent of golf courses—about 100 in all—in the Inland Northwest, he says.

Planet Turf representatives conduct soil tests, provide the findings to customers, and then make recommendations as to how to best treat soil and grass. The company designs all of its fertilizers, which are then manufactured by Verdesian Life Sciences in Pasco, Connolly says.

Part of the arrangement with Verdesian is that Planet Turf in return sells some of Verdesian’s proprietary plant health products.

As for grass seed, Connolly says Planet Turf sells only the highest quality seed grown in Oregon and Washington. It purchases the seed from seed processors and then packages it in bags with the Planet Turf logo on them, he says. It then sells the products to golf courses.

Next year, he says, Planet Turf will begin reaching out to professional landscapers across Eastern Washington as part of an expansion into that industry.

“That could lead to an explosion in business,” he asserts. “There are no new golf courses being built, moving into the landscaping business can help expand on what we already have. There’s more revenue potential.”

Planet Turf’s main offices are located at 3030 E. Mission, but next year the company will move its operations here to an 11,000-square-foot office and warehouse building it just bought for $428,000 at 6422 E. Second in Spokane Valley.

Connolly declines to reveal the company’s annual revenues, but he says Planet Turf has had yearly revenue increases of 15 percent to 20 percent in the last few years. Planet Turf employs seven workers, three of whom are full-time sales representatives.

Connolly attributes a big part of the company’s success and growth to the assistance he and his wife received from the Washington Small Business Development Center in Spokane. Support for the SBDC comes from the U.S. Small Business Administration and Washington State University. The Washington SBDC provides free, one-on-one advising to small business owners who want to start, grow, or transition their businesses.

Connolly says he had the scientific expertise and sales experience to start the business, but both he and Amy lacked the business knowledge to expand the company. Connolly says he’s worked with Spokane-based SBDC advisers Alan Stanford and Vern Jenkins to achieve growth while building equity in the company as well.

“I think one of the bigger keys to our success is that our sales reps don’t have sales backgrounds. We were all golf superintendents. They have agronomy and golf in their backgrounds. Many of our fertilizers were designed by the reps themselves,” he says.

He adds, “I can’t say I know of many, if any, companies whose sales reps had a role in the actual creation of the product.

Connolly says 70 percent of the company’s primary market is the Pacific Northwest. He has a sales representative assigned to Western and Central Washington, while his Eastern Washington representative covers Spokane, Idaho, and Montana.

Internationally, though, Planet Turf has customers in British Columbia, Japan, and Korea.

Also, Connolly says Planet Turf, to his knowledge, is the only fertilizer company in the U.S. with a contract at a golf course in Mongolia. “Well, there’s only two golf courses in the entire country, and the other course is played entirely on artificial turf,” Connolly says.

He has consulted with golf course superintendents, owners, and developers in 13 countries. For two years, Connolly was a turf consultant for the Seattle Seahawks at one of their previous practice fields.

But Connolly says the business certainly wouldn’t be where it is now without Amy’s record keeping.

“This doesn’t work if there’s no data. We have a database of over 2,000 soil test results, and our advice to customers about building healthy soils and plants is why we stand out among our competition,” he asserts, adding, “Fertilizer, and other products, are only effective if you know when to apply them, how to apply them, and understand the most effective method of application.”

Connolly earned an undergraduate degree in agronomy from WSU in 1978. “The evolution of the turf degree didn’t start until the ‘70s,” Connolly says.

“An agronomist typically loves golf, hence the desire to be a course superintendent,” he says.

Connolly, who grew up in the Tri-Cities and his wife, a Spokane native, lived in Hartford, Conn., when he was a PGA course superintendent. “It’s the pinnacle of the world, or at least for a while,” he says.

The urge to return to Washington took over, and they returned home in 1995, he went to work for the former Jacklin Seed Co., in Post Falls, and subsequently J.R. Simplot Co., after it bought out Jacklin Seed in 1997.

“I got to the point where I finally wanted to build my own dream,” Connolly says.

Connolly says he’s sometimes torn about the prospect of expanding the company beyond a certain point.

“We’re small, nimble, and can change products fast. The bigger you get, though, the harder that becomes. And we’re not at the whims of DuPont or Dow,” Connolly says.