City looks to add to coffers with more, smarter meters 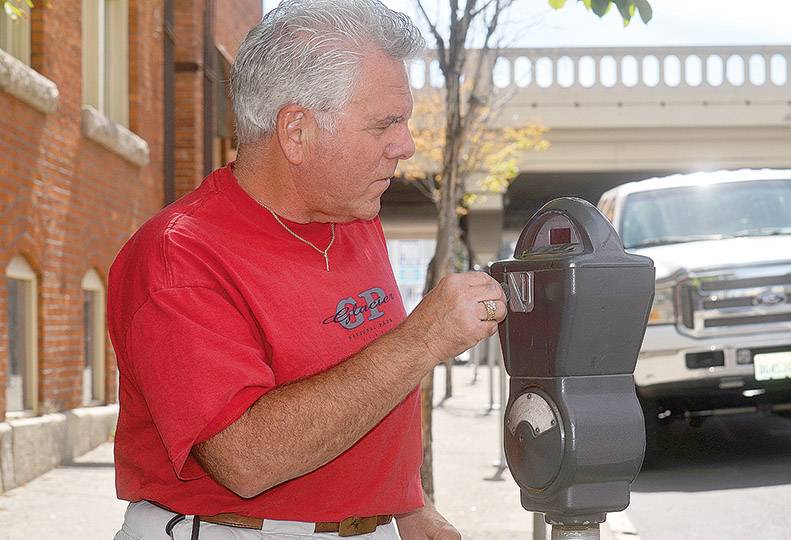 -—Judith Spitzer
Mark Anthony says he moved his photography studio out of the downtown area partly because of the parking meter issues.

With the addition of 350 parking meters on Spokane city streets outside the downtown core, a high-tech tool to find people with unpaid parking tickets, and steel boots that put teeth into previously unenforceable meter violations, the city of Spokane estimates it will see more than a quarter of a million dollars in new revenue annually.

Last year, the city bought 800 new parking meters at $1,000 a pop that offer the option of paying with a debit or credit card, and installed them in the downtown core. The new meters also have sensors that monitor whether or not a car parked at that spot has moved—and can clear out the meter when the parking spot is vacated.

The old meters are being recycled and installed just outside the core in surrounding neighborhoods and around the lower South Hill, mostly near hospitals, clinics, and apartment houses, as well as near Lewis & Clark High School.

The city is touting the addition of the meters at the edge of downtown as improving the availability of parking for local businesses and people living in the area, but many of the meters are being installed in areas where there are few, if any, businesses.

David Steele, city parking manager, says in the first phase of the program, parking meters have been installed on Sixth Avenue from Wall to Stevens streets. Meters are also going in on Howard Street from Fifth to Sixth avenue and on Fifth from Howard to Stevens street. They will also be installed on Pacific,  Second, and Third avenues from Bernard to Browne streets. The second phase includes Third through Seventh avenues between Bernard and McClellan “with a few stragglers outside of that area,” says Steele.

He contends the meters are making more space available for residents in those areas and helping to create turnover for local businesses.

“So it’s not going to generate a lot of new revenue, but it will provide turnaround parking to assist business owners,” he says.

Spokane averages about $2.6 million in meter revenue and $1.4 million in citation revenue annually. The new meters are expected to bring in an additional $50,000 in meter revenue, Steele says. Revenue from the boot program is estimated to be about $200,000 to $250,000.

“That is a conservative estimate,” he says.

“If there are no meters, people get squirrely with the way they park. They get unruly and start to cause problems for business proprietors.” He says long-term parkers take up spaces that could bring in more customers for businesses.

A typical parking ticket in the downtown area is $15.

If not paid in 15 days, it goes up to $40. If it’s ignored again, it will probably more than double with interest and collection fees, says Steele.

Letters were sent out in July to those who still have four or more overdue parking tickets and who are eligible for the boot-and-tow program. Scofflaws they’re called, says Steele.

The parking boot hasn’t been seen in Spokane since the late 1980s when the city was hit with a federal class action lawsuit, which it won, but only after the state’s attorney general advised the city to discontinue using the device.

Since then Steele says the city has reconfigured the notification process  for receiving the boot which locks the wheel and immobilizes a car. “The notification process before was not as transparent as folks would have liked,” he says. The boot was reintroduced over the summer and just this week the first boot was attached to a car which had amassed more than $4,000 in parking tickets, he says.

“Getting people to pay parking tickets was the impetus behind reintroducing the boot,” Steele says

The city also has received complaints about laws that prohibit drivers from plugging meters beyond posted time limits, but that law has been essentially unenforceable up until now.

With a new license plate reader that can scan up to 5,000 license plates per hour, Steele says the system can tell if a vehicle has moved or is sitting in one place, which means someone is plugging the meter.

“The system records GPS data and high resolution images of the wheels for each vehicle; they are then compared to the information when the license plate reader vehicle passes by again,” he says.

The reader system is mounted on a parking services car and when the vehicle is active, a computer at City Hall enables management to watch a real-time map of the images being taken, he says. “The images are stored on a server for the 48-hour period and then deleted.”

The system doesn’t collect registered owner information, instead recording just an image of the plate and wheels, and time and location information, he says.

“If a violation is found and a citation is written, there is still no registered owner information collected unless the citation goes unpaid for a week,” he says.

Unpaid parking tickets total nearly $4 million in Spokane, and Steele says there hasn’t been much incentive for people to pay.

“Outstanding active parking citations going back 10 years total 76,000 past-due citations in collections, for a total of $3.9 million in fines, fees, and interest,” he says.

One vehicle owner here has $14,985 in parking tickets in collections, which is roughly 175 citations, says Steele.

Before the first  boot immobilized the first car this week, the city  ‘fake booted’ a car in front of City Hall and two other locations—just to alert citizens that the boot is coming. Steele is happy to report that the boot staging played well on social media.

“It was all over Facebook,” he says. “We’ve done it three times now.”

He says more people are paying their parking tickets since the amnesty program ended in June, and he thinks it’s due to the threat of the boot.

“Historically, we can see that the number of people paying their tickets has increased,” he says. He says the city take from citations has increased by about $7,500 a week since the parking ticket amnesty program ended.

Mark Anthony, owner of Spokane-based Anthony Productions, says he moved his photography studio out of downtown because of concerns over parking.

He says he didn’t want to deal with clients who parked near his business and sometimes found a parking ticket on their windshield.

“They would have to just drop something off, or come by the studio, and would find a $15 parking ticket when they got back to their car,” he says. “They would be livid.”

Anthony moved his business from the downtown area to a business park on the North Side where he doesn’t have to worry about parking meters.

Steele says increased revenue will stay in the parking budget and be spent replacing and repairing streets and sidewalks, as well as on enhanced public safety.

Sensors on the 800 meters downtown do give drivers another option to find and pay for parking. A smart phone app that can tell drivers, in real time, where to find empty parking spots is imminent, Steele says.

“We are working toward implementation over the next 30 days,” he says.

Every meter in town will soon have a sticker that has a chip readable by a smart phone. The sticker will take drivers to a Quickpay app where parking can be paid for from an already-established account.

“Pay-by-phone users will be allowed (by city ordinance) to stay past the time stay of the meter with one 15 minute paid extension. If your phone can’t read the chip you can use the QR code or just text the number on the sticker. This will also allow drivers to use a credit card to pay for parking at any meter,” he says.