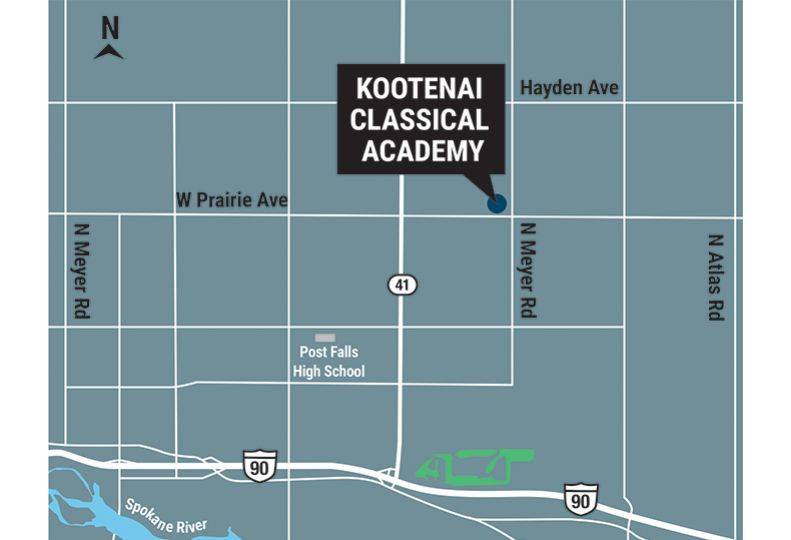 Kootenai Classical Academy is planned on 11 acres of farmland, at the northwest corner of North Meyer Road and West Prairie Avenue, on the northern edge of the city of Post Falls, says Ed Kaitz, board chair of the public charter school.

Kaitz says the school is expected to open in time for the 2023-24 school year.

The first year of instruction will be open to 428 students in grades K-8, followed by another grade level to be added each year until the school is K-12.

The total occupancy for all grades at the school will be 702, he adds.

“The city has been tearing up this old railroad track, and the south end of the school will be bordered by this bike path there that’s going to tie into all the other bike paths in the area, including the Centennial Trail,” he says.

The school site was part of a recent annexation by the city of Post Falls, without which the entire project would have been delayed, Kaitz says.

“The market has been so challenging here recently in terms of finding land,” Kaitz explains. “Just finding property that’s affordable in this area in the last few years has been really unbelievable. A lot of times public charter schools are on limited budgets, and they have difficulties attracting funds, so they have to build on reduced-sized properties. But we’re really excited about being associated with the Jacklins on this.”

Kaitz says the rising popularity of classical academies is bringing back old-school teaching methods that are hands-on, engaging, and low-tech.

He adds that a distinguishing characteristic of Kootenai Classical Academy will be to focus on the moral character development of its students as part of the curriculum.

Kaitz says the North Idaho community has shown a lot of interest in the school, which now has about 1,200 students on an interest list.

Students will be selected based on a lottery process. Kaitz says, “Anyone in Kootenai County can attend.”

Charter schools are operating in Coeur d’Alene to the west and Rathdrum to the north. A new altenative technical charter school, Elevate Academy-North, is scheduled to begin operations in Post Falls in August.

“We feel like we’re filling a gap in the market, and we have a ton of parental support, even though our lottery will be extended to anyone in Kootenai County,” he adds.

•Golf District LLC has leased a 6,700-square-foot space at the Five Mile Shopping Center for a new sports entertainment venue, at 1808 W. Francis, at the former Play it Again Sports, in North Spokane, say owners Ronette and Craig Lodgard.

Tenant improvements will include tearing down walls, raising the ceiling, putting in 10 simulator bays, adding a small kitchen area and bar, and installing a second bathroom, Ronette Lodgard says.

The construction value for the renovations is $100,000, according to building permit information on file with the city of Spokane.

Golf District simulators will be available for hourly rentals and the venue will serve beer, wine, ciders, and small appetizers in an adults-only setting.

“My husband recently retired … and this winter I’m in the kitchen hearing this noise, thinking, what was he doing?” Lodgard says. “I go downstairs and there he is hitting golf balls into two nets in front of my big picture windows. I said, Lord, how do I get him out of my house, and I heard, indoor golf.”

Lodgard says she realized after researching the concept that it could work as a business for their family. Golf District will be run by the Lodgards and six of their seven children, she says.

She expects to open Golf District in mid-September. Hours of operation will be 10 a.m. to about 10 p.m., seven days a week.

According to the company’s website, the building will have 107 apartment units and 12,000 square feet of retail space.

Representatives of InterUrban Development couldn’t be reached immediately for comment.

Coeur d’Alene-based Miller Stauffer Architects PA is providing architectural services for the project, which is expected to be completed in 2023.