Power Shift: Dennis Vermillion prepares for next era of leadership at Avista

Incoming CEO plans to innovate, double down on renewables 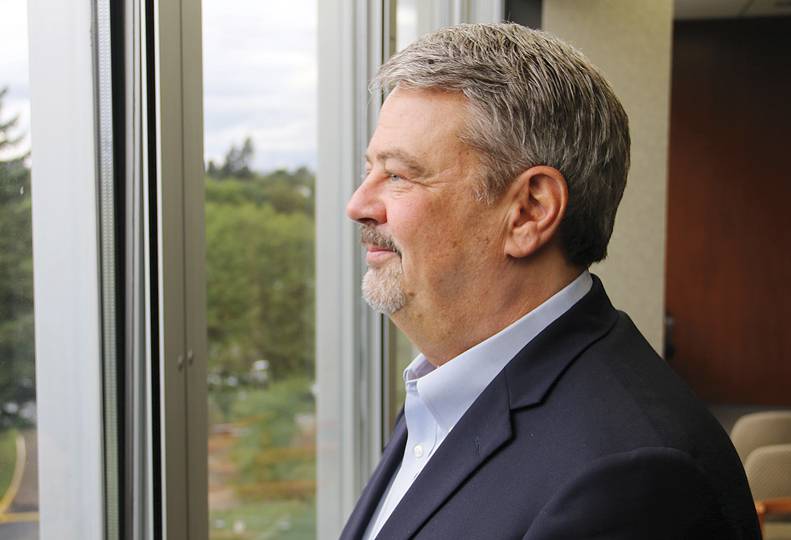 As a born-and-raised Spokanite and a 34-year employee of Avista Corp., Dennis Vermillion has been embedded in the community and in Avista for most of his life.

Combined with his deep industry knowledge, his career trajectory through Avista’s ranks, and his experiences working alongside CEO Scott Morris for the past decade, Vermillion says he is well-positioned to lead the Spokane-based company.

The president and incoming CEO of Avista lives in Spokane Valley, near where he was raised and attended West Valley High School. He received his electrical engineering degree from Washington State University, then immediately went to work for Washington Water Power Co., which would later be renamed to Avista.

“At his core, he’s a Spokanite,” says Spokane Mayor David Condon of Vermillion. “He’s somebody that definitely comes from the perspective of a citizen who was raised here and continues to live here, and is committed to providing good service.”

Now 57, Vermillion started working at Washington Water Power in 1985 as an electrical engineer in the power supply department, which managed the power system and flow of energy.

“I rotated around for about 10 years within the power supply department, and I think I did every job that there was,” he says.

Says Condon, “He knows the nuts and bolts of the business, which is critical in something as technical as the energy sector.”

Around 1995, Washington Water Power formed subsidiary company Avista Energy, an energy marketing company that optimized energy assets such as generating plants or pipelines and oversaw structured deals between energy providers. Vermillion became president of that company after 3 1/2 years, and remained in that role for more than six years.

When Avista Energy was sold to Royal Dutch Shell PLC in 2007, Vermillion opted to return to the utility company.

In this capacity, Vermillion has worked closely with Morris during most of Morris’ tenure as CEO.

“He’s been a wonderful friend and mentor to me,” Vermillion says.

The changeover of CEO duties will begin in a few days: on October 1, Vermillion will take on CEO duties from Morris. Morris will retire March 1.

Vermillion says that in more than a decade of watching Morris, he’s learned that passion and “believing in what is possible” can go a long way, as can giving employees room to flourish.

“One of the great things that I love about our company is the opportunity to do different things, to learn, and to grow,” Vermillion says. “I benefited from that greatly. To be in this role, to be able to pay that forward and continue that culture and that legacy that we have as an organization is something that I’m really happy to be doing.”

Vermillion says attracting high-quality employees to Avista will be a major part of his strategy as CEO. Listening to their voices, and to those of customers, stakeholders, and community leaders will be vital to his leadership.

“I like to collaborate on things, and I find great value in having diverse points of view and bringing people together to solve tough problems,” Vermillion says. “Sometimes it can be uncomfortable, because you have the diversity of thought and backgrounds. But you always get better outcomes. It’s powerful when you bring a group of people together and solve problems in that way.”

Tim Henkel, president and CEO of Spokane County United Way, is familiar with Vermillion’s leadership style — Vermillion served on the organization’s board of directors for six years, during which time he spearheaded its fundraising campaign.

“The thing that really stands out for me about Dennis is that he’s pretty unassuming,” Henkel says. “He leads by example. He leads by the thoughtful approach that he takes in anything he takes on.”

Vermillion says he looks forward to the challenges of the future, namely the shift toward renewable energy sources, which Vermillion says is a major focus for the company.

“We are really well-positioned; we’re already one of the cleanest utilities in the country,” he claims. “With the cost of renewables coming down and the technology changes, it’s not going to be easy, but we are well-positioned to make substantial progress to be as clean as we can, as fast as we can, without compromising affordability and reliability, because that’s bedrock.”

“There is a role for natural gas, certainly: on the electric side, it’s critical for backup, and for the affordability and reliability component of that,” Vermillion says.

Avista is also looking for ways to make natural gas cleaner, Vermillion says, through strategies such as gas decarbonizing.

While costs for renewable energy sources are decreasing over time, Avista is seeking to increase consumer rates in response a variety of factors that are raising its costs.

Vermillion asserts that throughout its 130-year history, Avista has been known for innovation. That legacy will be important as Avista gains traction in using renewable energy technology.

“When we look at the challenges that we face as a society and as an industry, going forward, we know that it’s going to take a real innovative mindset, culture, and employee base to rise to meet those challenges,” Vermillion says. “What I hope, when I’m done with my tenure, is that we can look back on the difference we’ve made on the clean energy side.”

Vermillion says the failed deal with Toronto, Ontario-based Hydro One Ltd., through which Avista would have become a subsidiary of Hydro One, reinforced some things he already knew.

“Number one, things don’t always work out,” Vermillion says. “It reinforced who we are as a company, what’s important to us, and what’s important to the communities and customers we serve. As we worked together, it was clear how much Hydro One valued and wanted to learn from our culture and history of innovation, and how we engage with our customers and communities. I knew these areas were strengths for us, but this was reinforced throughout the process.”

Vermillion says Avista is not an acquisition target at this time.

He adds, “Even as we worked hard to receive approval of the proposed partnership, our employees stayed focused on serving our customers and engaging our communities, just as we always have.”