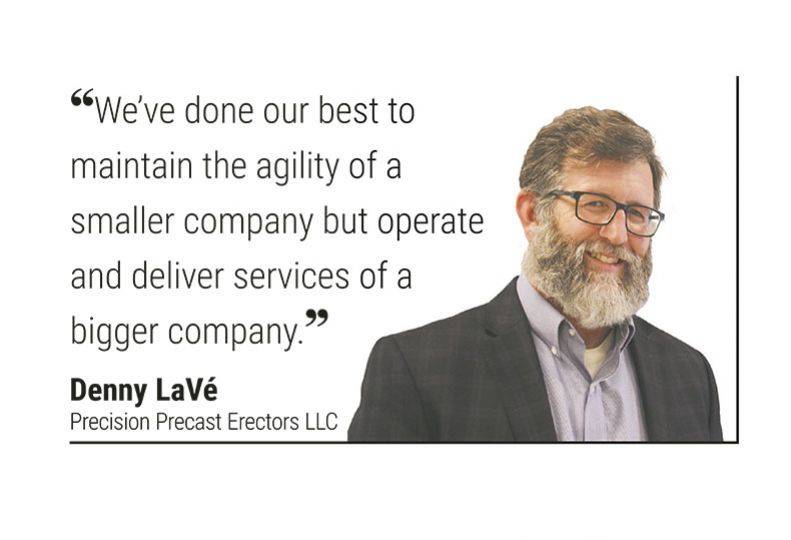 Denny LaVé, co-owner and manager of Post Falls-based Precision Precast Erectors LLC, says scheduling issues, delivery delays, and supply-chain bottlenecks in the construction industry are becoming more difficult to plan for and overcome. So the company is looking to expand its precast manufacturing partnerships and services to include consulting services as a way to remain competitive and grow the business.

“There’s a lot of things going on in the world causing this,” LaVé says.

He adds, “If you get one job that moves, it’s not a huge deal, but if you have multiple projects that move, that can be really problematic down the line, especially because project delays often aren’t available with enough advance notice to backfill with other projects.”

Construction delays also make it challenging for Precision Precast’s operations team to pivot and staff up again later, he says.

LaVé says he hopes the company’s goals will help it earn back a place on the Inc. 5000 Fastest Growing Companies list next year, which he sees as an important honor for the business that was missed this year.

The precast installation company has previously been named to the list five times since its founding in 2008, most recently in 2020.

LaVé says, however, the acquisition ended up benefitting Precision Precast, because two clients merged into one client and opened an opportunity for Precision Precast to pursue another manufacturing partner.

LaVé says Precision Precast has grown to earn about 80% repeat business with about 90% of revenue from precast installation work.

Due to delayed deliveries that have been plaguing construction scheduling across the industry, Precision Precast Erectors currently requires a minimum of six to eight-month lead time. He says it’s common for delays on one project to cause a ripple effect of delays for other projects and clients.

To overcome the company’s scheduling challenges, Precision Precast is working to become a high-level, full-service company that provides expert advice and consulting for business partners and clients to improve material delivery efficiency and other scheduling solutions for projects, LaVé says.

Precision Precast assembles and installs manufactured concrete slabs that have been delivered to construction sites for its clients and partners, which are general contractors and precast manufacturers, he says.

“Sometimes the projects just consist of us setting columns, beams, and horizontal slabs, or making a floor system. Sometimes it’s just the walls on the outside of the building,” he says. “In other instances, they want the whole structure out of precast, and the Davenport Grand Hotel is the best example of that locally. The entire structure of the hotel and ballroom area is precast concrete, and it was all made at the Oldcastle plant on Carnahan Road in the Valley.”

Benefits of using precast construction materials include the ability to erect structurally sound buildings and allowing more usable space than other materials, such as steel, that take up room for beams and columns. The precast also is considered fireproof.

“We have to help them to make good decisions, so they get the outcome that they want,” LaVé says. “There’s a lot of dialogue, questioning, checking assumptions, and trying to identify obstacles and bottlenecks in the system that slow down our ability to produce and provide the results they hired us to deliver.”

“We’ve done our best to maintain the agility of a smaller company but operate and deliver services of a bigger company,” he claims.

The company employs a dozen key full-time staff members and expands or decreases additional staff depending on the project needs, LaVé says.

Upcoming projects include the Spokane County Indoor Small Arms Range, on the West Plains, and a new building at the Prairie Falls Golf Club, in Post Falls. Construction on both projects is scheduled to start in October.

Precision Precast is located in an 8,500-square-foot building at 1096 Innovation Way, in Post Falls, about two miles northeast of the Cabela’s sporting goods store.