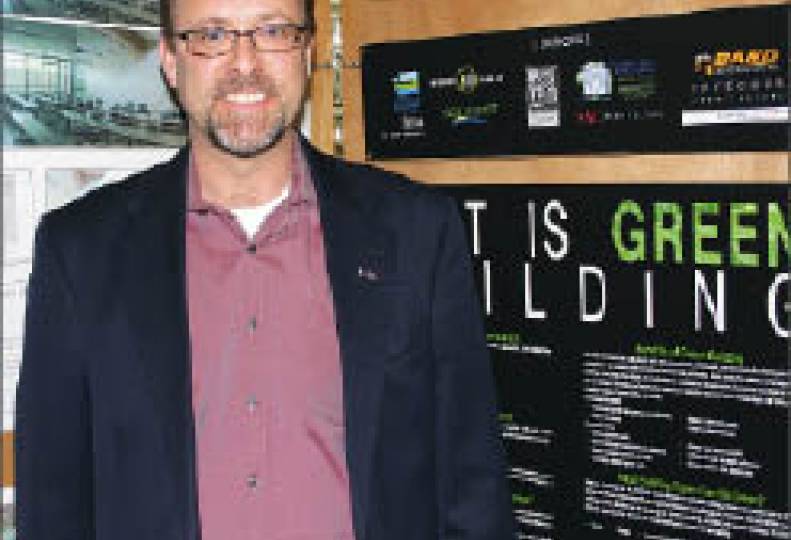 -—Staff photo by Jeanne Gustafson
Work-force strategist Mark Mattke says some of the sector's growth here is related to the green and sustainable subsector.

The professional-and-technical-services sector here has grown at a quick pace in recent years, even during the recession, while offering job opportunities that pay above the average wage in the area for jobs that don't necessarily require advanced degrees, economists say.

"Professional and scientific services is one we really see on an upward trajectory," says Mark Mattke, work-forcestrategy and planning director of the Spokane Area Workforce Development Council.

Patrick Jones, executive director of Eastern Washington University's Center for Public Policy and Economic Analysis, says data the center has compiled in cooperation with the Washington state Employment Security Department show significant growth in the professional-technical sector here between 2001 and 2008, compared with overall growth in Spokane.

The gross domestic product of that sector, meaning the total value of all goods and services it produces in a year, grew roughly 51 percent during that period, compared with growth of about 42 percent in Spokane's overall GDP, the research showed. Based on GDP, professional and technical services was Spokane's eighth-largest industry sector in 2008, the most recent year for which such data are available, Jones says.

In some sectors, such as manufacturing, GDP can rise even while labor forces shrink because of increased mechanical efficiencies, while in a sector like professional and technical services, which is "almost all a knowledge-worker sector, that kind of substitution isn't as available or important," Jones says. He says in the professional-technical sector, GDP growth is more strongly linked to increased employment.

Mattke says that the professional-technical sector here added about 2,000 jobs in the Spokane area between July and September of last year, which was more jobs added than in construction, manufacturing, government, or the information and financial fields.

"The sector, over a long period of time, is one of the growth sectors that has been very promising in our community," says Randy Barcus, chief economist for Spokane-based Avista Corp.

Professional and technical services, jointly encompassing a wide variety of professions, is one of roughly 20 large industry groupings identified in the North American Industry Classification System (NAICS). That system is used by federal agencies in classifying businesses when collecting, analyzing, and publishing statistical data related to the U.S. economy.

Professions that fall under that grouping include legal, accounting, and tax services; architectural, engineering, and surveying services; management, scientific, and technical consulting; computer-related services; advertising and public relations; and market research and veterinary medicine practices, among others.

Mattke says the Spokane Area Workforce Development Council has identified the professional-technical services industry as an area of growth, and aims to connect workers here with training in subfields in which they can make a living wage.

It's an important area of growth, he says, because many of the jobs within it require post-secondary education, but not necessarily four-year degrees, making them accessible for workers who have been laid off or are underemployed and need to retrain for better-paying work.

"What's good for us is a lot of these occupations require two-year professional degrees or less," such as community college degrees or professional certifications, which for most people are obtainable within a couple of years, Mattke says.

"Its growth was impressive and above the average. We should be looking at any category that is growing like that and above the average wage," says Rich Hadley, president and CEO of Greater Spokane Incorporated. Hadley says that the professional-technical sector has been perhaps a bit of a hidden gem.

"It is a very important category and one that we can really include in what we're doing relative to recruitment and expansion," Hadley says. He says GSI has focused a lot on recruiting research and development ventures, through its involvement with SIRTI, the Institute for Systems Medicine, and the development of the University of Washington School of Medicine's WWAMI program here, but many of the services included in the category, such as "legal, accounting, advertising, and market research, are ones we've previously termed business and professional," he says.

"A good example of the type of growth going on here in that sector is in the research in the subcategory of scientific research," Jones says. "We have a company growing extremely well here—Hollister-Stier," he says, which the Journal of Business recently reported had increased its work force by about 70 people, up to 620 employees overall.

Growth in the professional-technical sector is good for the economy for several reasons, Barcus says. Those reasons include an inflow of dollars to the economy, a healthy reflection of national growth, and a regional complement to growth industries in neighboring metropolitan areas.

Barcus says that as opposed to exporting goods or having to buy raw materials to produce economic value here, exporting creative services while keeping talent here creates a positive economic flow for the region.

"We do have a lot of engineers and architecture firms that work here locally, but they are working here for people elsewhere," he says.

"Why these business and professional services are so important is that we're exporting the work and importing the money. You can either export goods like aluminum and timber and silver and bring money in, or you can export services to other places," Barcus says.

"That's why I'm really tickled with the growth in Inland Northwest Health Services. It was local, but now has contracts all over the place, and the jobs are here, but the people receiving the work are in Seattle, Portland, and elsewhere," he says.

Jones says he decided to look at the trend in the professional and technical services sector because it was a growth area that economists already knew about to some degree, but mapping it out and showing the growth it has experienced with solid figures brings it to the forefront as an economic development tool.

"I think there are a few of us who kind of knew this, but mapping them out" was a new exercise, Jones says.

Barcus says that the sector is growing rapidly elsewhere, too.

"What we are seeing locally is also being seen nationwide," but that's not a negative, he says. "It's common in most communities to see this kind of growth. We're not different, and it's good."

"It's important for the city of Spokane because so many of these companies are located within the city," Jones says.

Barcus says the increase in the professional and technical services sector here serves as a complement to manufacturing industry growth in North Idaho.

"I think our tax structure in Washington tends to favor businesses like this, while Idaho tends to favor manufacturing-type businesses, in a very, very broad sense," because it doesn't have a business and operations tax, Barcus says. "That's why I like this region, because we have both sides of the coin here. When a company comes here we can put them in Post Falls or Liberty Lake, depending on the tax structure that works best for them."

Mattke says a lot of jobs related to the emerging focus on environmental sustainability fall into the professional and technical services sector, making it likely to continue growing here for some time.

"A lot of those new arenas we are very excited about fall in this subsector," he says. "The ongoing outlook is this is going to be a focus of ours for a long time to come."