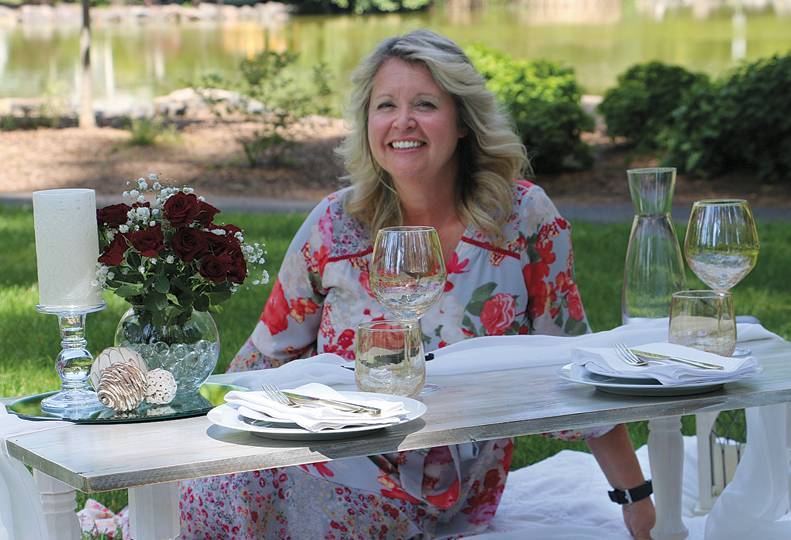 As Rachel Killpack learns more about the landscape of the Spokane area, she’s constantly on the lookout for its best picnic locations.

“You’re looking for somewhere that’s got that picturesque feel to it, but you’ve got to think about the shade, how busy it is, how noisy it is,” Killpack says.

She started Pop Up Picnics Spokane toward the end of May with the intent to set up luxury picnic spots for clients in the Spokane area.

Now, Killpack receives dozens of emails each week from potential clients and says the business has flourished beyond her expectations.

Killpack, a British teacher who has spent most of her life in Australia, says that when her American husband, David, was transferred to Fairchild Air Force Base, she found herself itching for a productive way to spend her time.

“I took a photograph, and I posted it on Facebook in one of the Spokane groups,” Killpack says. “I had over 1,000 views. People just went crazy messaging me.”

Now, she’s setting up picnics two or three times a week. She says she’s put together more than a dozen picnics since she launched Pop Up Picnics Spokane, and she has about six more planned.

Killpack is the sole employee of Pop Up Picnics Spokane, which is a registered trade name under David Killpack’s paddle sports tours, classes, and rental business, Project E2 LLC.

Killpack says her teenage son occasionally helps with carrying heavier items, such as tables, to picnic sites, especially more remote locations, such as a trail overlooking the Bowl and Pitcher area of Riverside State Park.

The price of a picnic depends on the size of the group, ranging from $99 for up to six people, to $250 for up to 20 guests. Killpack is in the process of launching a website for Pop Up Picnics Spokane; in the meantime, she says messaging her through Instagram or Facebook is the best way to book a picnic.

When the picnic is finished and the guests are ready to leave, the client messages Killpack.

“Then I come and pack it all away for them, go home, and do the washing up,” Killpack says.

Despite having been in business for only a few months, Killpack says Pop Up Picnics Spokane is on the verge of becoming profitable.

“I’ve been bowled over by how it’s taken off,” Killpack says. “I haven’t borrowed money or anything, I used savings to get set up. I have been very thrifty about what I’ve spent. I was very reluctant to go crazy with the budget, because I didn’t think I’d make any of the money back, but I’m almost there.”

Killpack says she’s received offers from people interested in helping her grow Pop Up Picnics Spokane, but she doesn’t want the business to expand rapidly.

“Our long-term plan is to return back to Australia,” Killpack says. “It may well be that I’ll carry on letting it grow naturally until then, and then maybe at some point I’ll sell it off as a going concern.”

In the meantime, Killpack says she’s enjoying playing a role in clients’ celebrations.

“It’s so special, because a lot of the people who book don’t let their other half know, or it’s a surprise for somebody in the group,” Killpack says. “I get to share in all of these magical moments with people.”