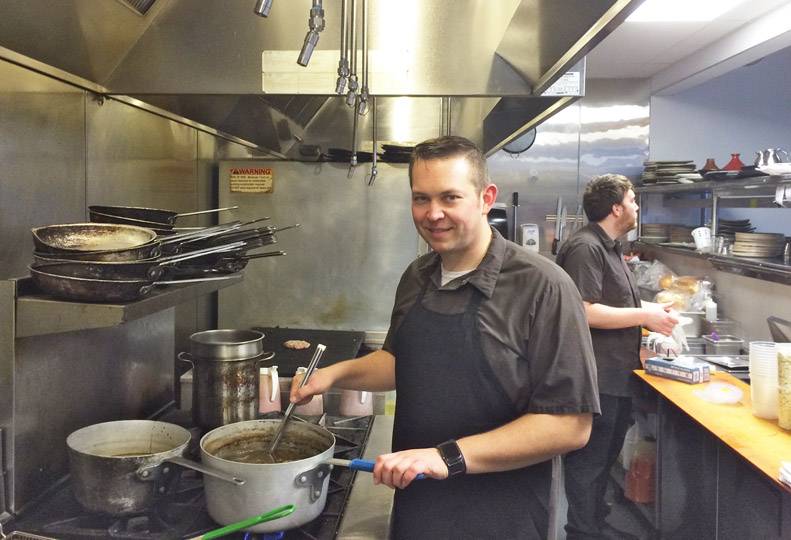 Since opening the Wandering Table in May 2014, chef Adam Hegsted has built a small culinary empire, with five dining properties in Spokane and Coeur d’ Alene.

Hegsted began to expand his brand in 2013, by forming the Eat Good Group LLC, which manages his interests and currently has 95 employees. The company will take in an estimated $5.5 million in revenue this year.

Last year, The Wandering Table was mentioned in the Wall Street Journal along with Spokane as a city with a vibrant dining scene. That same year, Hegsted was nominated for the James Beard Foundation Award for best regional chef, an honor of culinary prestige presented to chefs who set new standards of excellence using local food.

His culinary education started at Spokane Community College, after which Hegsted attended the Art Institute of Seattle where he completed a two-year culinary degree in one year.

The speed at which he finished the program was a harbinger to a career characterized by Hegsted moving up quickly in the culinary world. He started as a saucier and lead line cook at the Seattle Space Needle. He spent a little over a year there, then was hired as the chef de cuisine at the now closed Ridpath Hotel in downtown Spokane.

A five-year run at Black Rock ended when club executives decided to change the restaurant’s theme from American fine dining to a steak house menu, at which time Hegsted put in his two weeks’ notice. Instead of looking for an executive chef spot at another resort property, he opted for a small-scale, fine dining restaurant called Brix in Coeur d’ Alene and spent the next four years honing his attention to detail and finding a creative niche, which was the impetus for the Wandering Table, he says.

Hegsted left Brix in 2008, returning to work in a large commercial kitchen when he landed the head chef position at Coeur d’ Alene Casino Resort. While at the resort, on his off days, Hegsted started The Wandering Table; a concept restaurant that at first served impromptu dinners at various locations. He used social media to announce where the Wandering Table would pop up.

In 2013, backed by crowd sourcing platform Kickstarter, Hegsted’s restaurant found a home, becoming one of the anchor tenants for the then-fledgling Kendall Yards development, northwest of downtown Spokane.

In 2014, the Eat Good Group increased its portfolio, adding two more restaurants: a second café in Kendall Yards, called Yards Bruncheon, and Hegsted stepped in at the Cellar in Coeur d’Alene to revamp its kitchen and retool the menu.

We sat down with Hegsted at his office on the Meadowwood Technology Campus to talk about his career, and the business climate for restaurants in Spokane, and to get a look forward on how the chef envisions his business growing.

Journal: What started you on your career path?

Hegsted: I took a lot of art classes in high school at our school’s skill center, which was a lot like a trade school. I think my appreciation of art comes from this, and it certainly influenced my belief that food is art. They offered chef’s training too, and I took it as a curiosity.

Before that, I used to cook with my mom. I think I learned the mechanics of cooking from her. The joy and wonder of food came from my great aunt who was a U.S. ambassador that traveled the world. She’d come home with stories of exotic restaurants, then we’d go eat and talk. We had Thai, Indian. I was amazed at the flavors.

My mom, my great aunt, and those high school art and cooking classes guided me toward culinary school. Once I got there, I don’t know if I can say it was my passion yet. The passion started when I was in Seattle. I had a good amount of time between classes and started reading cookbooks. I pretty much read every book I could get my hands on in the library.

Journal: Did you know you wanted to own your own business?

Hegsted: No. I just wanted to do well in school and be a good chef.

Hegsted: Business classes aren’t part of the curriculum at culinary school. I’ve had to become knowledgeable about business. I love to cook and be in the kitchen developing recipes, but I have to be the business person that’s head of everything. If we don’t manage money properly, no one cooks. No one does anything.

Journal: As a multiunit, independent restaurant owner, can you describe the business climate of Spokane?

Hegsted: In regards to owning several restaurants, the advantage to Spokane over cities like Seattle is real estate prices are not so high here. Opening a new restaurant is attainable as far as startup costs, but once you’re open, the game changes. It’s a competitive place. We’re a small city but customers expect great service and we’ve gone, in the last 10 years or so, from a city with no food culture to being recognized nationally.

Journal: The restaurant business is notorious for narrow profit margins. How do you do make it work?

Hegsted: We follow a modified version of the percentages everybody uses in the restaurant business. Our formula is 30/30/20. Thirty (percent) for costs of goods, thirty for labor—it’s more like 32 to 36 percent—and about 20 goes towards overhead. Profit pays down debt first.

Journal: How has your local sourcing philosophy affected these figures?

Hegsted: What people don’t understand is using local is cost effective. It’s less expensive to use seasonal ingredients as well. Customers know these foods taste better, but don’t realize sustainable and local can fit into a profitable business model.

Hegsted: Yes. Definitely. Wage increases fit into our model about as well as it could. I think the wage change may, in the long run, benefit the restaurant industry. I mean, we’re going to get the most qualified guys. People will be fighting for jobs even at a position like dishwasher, which is hard to hire for and even harder to retain. We’ll be getting employees with experience who stay because the money is good.

Journal: What is your biggest challenge running restaurants?

Hegsted: Hold. I like food trucks. They’re doing creative stuff, but it’s a lot of work with a ton of liability and not enough money. For the Eat Good Group, right now, we have no plans for mobile food service other than I’m planning on doing more pop-up restaurants.

Journal: What’s the future of the Eat Good Group?

Hegsted: We’re looking at franchise opportunities. I’m also working on a fast-casual concept, but healthy. Like my other restaurants, it would be food driven. Sales take care of themselves if the food is good. That’s what I mean by food driven.

In the immediate future, we’re rebranding the Cellar to be more like the Wandering Table.

I’m working also on a food and wine festival for Spokane. Three days this June featuring chefs and wine experts from the Pacific Northwest and across the country. Spokane needs an event like the Aspen Food + Wine Classic and Feast Portland. What I can tell you is the restaurant scene is dynamic and growing. There are top-notch chefs in the city doing innovative things, and I think Spokane might just be the next Portland.