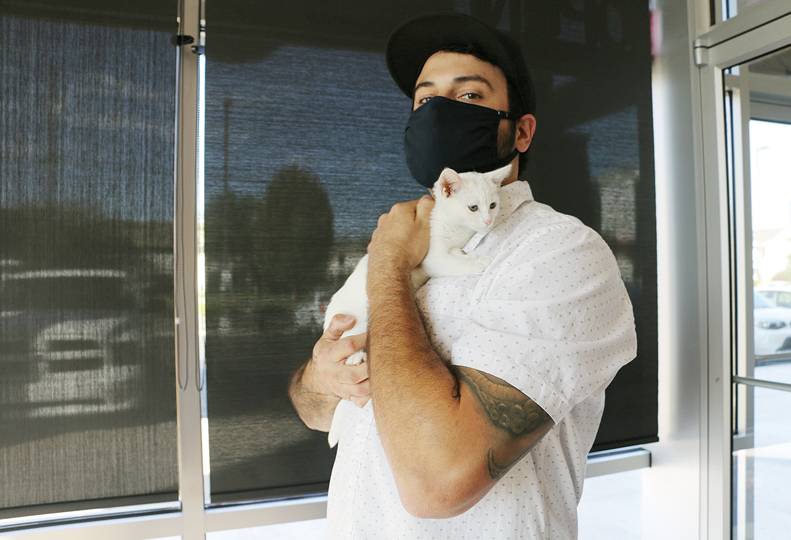 What’s a cat cafe without cats?

Justyn and Tori Cozza, owners of Kitty Cantina LLC, a cat cafe at 6704 N. Nevada, on Spokane’s North Side, found out last month when an outbreak of feline panleukopenia at partner organization SpokAnimal forced them to relinquish their cats for quarantine and treatment.

For two weeks, Kitty Cantina was catless. The cat room has since been sanitized and is once more a temporary abode for felines — mostly kittens — in need of a permanent home.

Justyn Cozza says that since Kitty Cantina opened in early June, more than 200 cats have been adopted. Patrons pay $8 per person to reserve a 50-minute session in the cat room, which includes a drink credit.

If a patron falls in love with a cat, they’re required to wait overnight before paying SpokAnimal’s adoption fee, which is between $65 and $130 depending on the age of the cat, to take their new furry friend home.

I sat down with Cozza in the cat room to talk about how the COVID-19 pandemic has been an unexpected boon to pet adoptions, how temporarily losing cats affected the business, and the challenges of the business model.

Journal: How has business been since you opened?

Cozza: Business has been good, considering what’s going on with the pandemic. We severely underestimated the adoption demand. We’ve had time to reflect on that and come to the realization that it’s very likely because of COVID.

There are a lot more folks at home bored. Kids are at home. There’s time that can be dedicated specifically to bringing in a new family member. I’m thrilled to see how many cats are coming and going.

What challenges have you experienced on the cafe side of the business?

We had some issues with a direct food supply. Now it’s just us having to go to the store to get the food, which is totally fine. It just isn’t consistent. Milk, for example, was really difficult to come by in quantities that could sustain a cafe or drive-thru coffee shop.

Kitty Cantina temporarily lost its cats back to SpokAnimal a few weeks ago. What happened and how did it affect the business?

SpokAnimal had a cat come in that had tested positive for panleukopenia. Panleukopenia is a huge deal. It’s not like an everyday upper respiratory infection, which is common among shelter cats and very easy to fix. Somewhere, someone probably missed an opportunity to do an isolation for that particular cat.

Originally, we were told: “Keep an eye on your cats. We’re having an issue here at the shelter.” A short time later: “Let’s hold off on adoptions. We need to confirm if any cats on your end have been exposed to this.”

Then another call: “We’ve got to bring them all back. It’s apparent that it’s likely that multiple cats that are with you right now were in contact with that cat.”

The cats go back, and we’re at a minimum two-week period without cats, at that point.

There’s a long incubation period from when a cat catches it until it could show symptoms. All of these cats have been given their FVRCP vaccination, which prevents this stuff.

However, when I get cats, they’re freshly spayed and neutered, dewormed, microchipped, and vaccinated, sometimes three or four days ago. It can take two weeks to build up in the system.

It was a very expensive loss on our end. Between supplies, losing business, and refunds for the cat room, it was probably $8,000 or $9,000.

That can go one of two ways with business: we’re either screwed, or, depending on how the community responds, we could rally. There were a few days where it was rough. We reduced our hours because nobody could come in the cat room. I had to refund a lot of money for people with reservations.

We floated through it. Luckily, there was an overwhelmingly positive response from the community. A lot of folks who had reservations said don’t worry about the refund, just put us in the books when you’re able to. I’m still dealing with that. It was hundreds of reservations.

Has anything about running a cat cafe surprised you?

A lot has. But the massive confusion people have about the room itself and its operation protocols has been, by far, the biggest challenge for us since we opened. I probably could have done it a little better. I explained it here and there, but I know not everyone is going to see that.

Between the website, Facebook, Instagram, word of mouth, and the news, it’s very confusing on how you gain access to the cat room. You can’t just show up and walk in. The cats would hate their lives here if this was a free-for-all petting zoo.

That’s why we only do six people at a time, it’s only for set hours of the day, and you schedule ahead of time because you have to read the rules, acknowledge the waiver, and make sure your kids are good to go.

We’ve been asking kids to leave if they’re not respecting the rules. I’m learning how to get that information out and convey the message to people before they show up with a confused look on their face.

What’s your vision for the future of Kitty Cantina?

We’d love to expand, maybe by one more location, but I would never franchise or do something silly like that.

If I can’t be there every day, I’m not interested. I just want to extend and strengthen our relationships with other organizations with similar missions, to build awareness, to reduce euthanasia.